King Arthur: Legend of the Sword movie review— A caper disguised as an epic fantasy

One mindless fight scene in the streets of Londonium is followed by another, until they all become a blur in the viewer’s head. 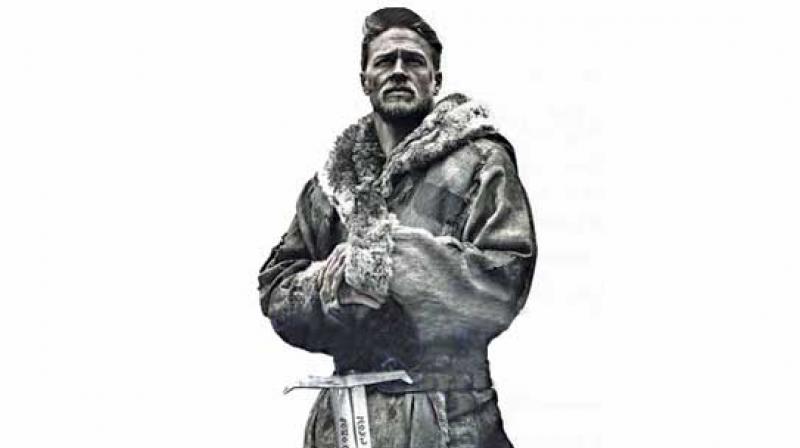 A still from the movie King Arthur: Legend of the Sword
Rating:

King Arthur: The Legend of the Sword is a quintessential Guy Ritchie affair, wherein style overwhelms the substance. The entire film is interspersed with jerky movements back and forth in time. In one scene, Arthur has a flashback of his parents’ death; in another, he narrates his plan of action while the scene is chopped and spliced with the one in which the described plan is unfolding. The overall effect, given the pace of the editing, is dizzying. One cannot immediately tell if the events have indeed unfolded as planned in the future, or if these scenes stand in for a visual representation of Arthur’s fantasy.

The film opens with a prologue in which Vortigern (Jude Law) kills his brother, Uther (Eric Bana) and his wife while their young son, Arthur, is forced to flee the scene. Arthur is adopted by prostitutes, and grows up on the streets indulging in petty crimes and pickpocketing. It is a travesty that the legend of a noble, mythical king is confused with that of Robin Hood, the noble, mythical thief. Uther’s sword, Excalibur reveals itself as Vortigern begins to gain more strength. He rounds up every young man in his kingdom to try and prise the sword out of a stone because according to a prophecy, only Uther’s true heir would succeed in doing so. Even in the anthropomorphised Disney version of the legend, the scene wherein Arthur becomes aware of his destiny is memorable for the importance it accords to the situation. Guy Ritchie, however, seems so obsessed with gimmicks and stylistics, that this key scene — when the sword really becomes the legend — is overshadowed by an insipid cameo by David Beckham, playing a cardboard cut-out of a mean soldier blindly obeying his king’s command.

For Vortigern to rightfully inherit Excalibur, he must kill its current owner. After Arthur successfully pulls the sword out, he is held captive by Vortigern, who could have easily killed him on the spot, but the thirst for spectacle costs Vortigern dearly as Arthur manages to escape. He is assisted by, among many others, his father’s former aide, Sir Bedivere (Djimon Hounsou), an unnamed Mage (Astrid Berges-Frisbey) who is a Merlin-esque figure and lends much of the fantastical elements to the film, and Goosefat Bill (Aiden Gillen).

One mindless fight scene in the streets of Londonium is followed by another, until they all become a blur in the viewer’s head. It is more of a crime caper, a cat-and-mouse chase, than an epic legend. In one bizarre sequence, Arthur is left alone at a fantastical place called the Darklands, where he trains himself to grasp the sword’s powers and learn about his own history by fighting CGI monsters. And more of these abound in the climactic battle scene as a 500-foot long snake emerges out of nowhere.

However, the soundtrack of the film is singularly jarring. Cacophonous drumbeats are accompanied by exhaling. Yes, sound of a person panting — which actually makes sense if one considers the pace of the chase sequences.

Jude Law, in spite of the cookie-cutter role of a conniving, megalomaniac, fratricidal tyrant, is perhaps the only thing that charms about King Arthur. The Mage has an interesting part, but like in most Guy Ritchie films, the female characters are casually forgotten to underscore the heroics of the hero.