For a decent amount of time, Toilet: Ek Prem… offers us the pleasure of watching him be loosely jhalla. 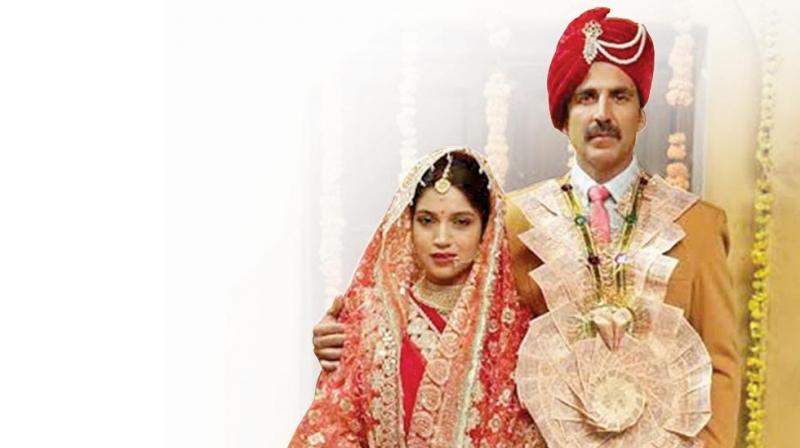 The first curious item we see in Toilet: Ek Prem Katha is a row of women squatting behind bushes and doing, you know, dum laga ke… Just then a letch on a tractor sniggers and flashes headlights at them.

The Lota Party, as they call themselves, immediately covers their faces, while their behinds remain exposed.

Next we meet Jaya (Bhumi Pednekar), who doesn’t hesitate for a second to lob Bhagwanji’s prasad — a hairy, hard coconut — at the same lecherous tractor man.

That was Mandgaon, where women were doing it khulle-mein. This is the gaon next door, where potty is done in the privacy of one’s lavatory.

Jaya, a local topper and moonh-phat, lives with mummy Vidya, papa Jagdish and a learned uncle (played by Anupam Kher) who is often in their drawing room watching Sunny Leone.

Cut back to Mandgaon where we meet Keshav (Akshay Kumar) who has had many love stories but no happy ending. He’s romancing a woman about to marry another while he must return home to marry a bhains — a big, black, four-legged thing called Mallika.

Keshav, 36, who works at his father’s cycle dukan, is not just manglik, but also has a very bad dosh in his kundali. He must only marry a woman with an extra thumb, a la Hrithik.

So when Jaya bursts into him while he’s doing his… you know, much cuteness and silliness follows. And soon, a fake thumb binds them in janam-janam ka bandhan.

But on their suhaag raat, even before the crack of dawn, Jaya is woken up by a knock on her window. It’s an invitation to join the Lota Party.

And there on begins the new-naveli bahu’s toilet ke liye tandav in a house where Keshav’s Babuji (Sudhir Pandey) wraps his janayu around his ears twice before peeing in the drain outside his house.

In fact, their entire village is doing susu-potty in the open because they think it’s a dirty paap to have tulsi and commode in the same angan.

Well, come to think of it, Main potty tere aangan ki… doesn’t quite have a ring.

As pressure builds up inside Jaya, her anger rises and she patkos bartans zor-zor se.

Keshav, who can only slink around problems instead of confronting them, comes up with many jugaads. But then the inevitable happens and Jaya goes home to do potty in peace.

What follows are rousing speeches by both husband and wife about Bharat desh’s weird sanskriti and parampara about shitting in another’s backyard.

It is very difficult to pull off a decent, articulate film about shit and sandaas that doesn’t make the viewer squeamish.

Potty is an icky subject, and the way it is done here, at least initially, is empowering.

Toilet: Ek Prem Katha, shot in Mathura, doesn’t flinch even once while championing the right of women to take a dump in the security and privacy of their homes.

Without timidity or awkwardness, it forges ahead, chucking lotas here and there, demanding women’s right to crap to when they want, and where they want.

Though the film uses the T-word (tatti), and presents private shauchalays as the new challenge to upper class Hindu mardangi, so Brahminical is the film that we do not get even a fleeting darshan of any human’s fecal offering. We do, of course, get to see gau-mata Mallika defecating.

For a long time, in fact, the film takes a seemingly honourable stand about waging a potty revolution. It quotes Sanskrit and shastas and goes after panchayat and pandit for standing in its way. But apart from that, not much happens.

Toilet: Ek Prem Katha really is the sum total of a lovey-dovey couple hunting for haagu places and bhashan-baazi. And yet it manages to go quite shitty after the interval.

Coiled in this seemingly straight-forward love story that is desperate to take saat-pheras around a Western commode, is such shameless toadying to Modi sarkar that my potty is toh now stuck forever.

While initially Toilet: Ek Prem... devotes itself rather ardently to an issue that’s often minimised by us city folk, towards the end it takes special pains to twist and yank the screenplay to shove in heavy-duty aarti of Modiji and his Swachchh Bharat Abhiyaan.

As Toilet: Ek Prem… goes through the labyrinth of Indian bureaucracy in search of a commode, we are told that the sarkar has already done everything; and it’s the people who are refusing to sit on ceramic potties.

We are also told that the rape and murder of Badayun girls was simply a toilet problem and not a law and order one.

People, it screams, are to blame for the potty scams; the system is all clean. And the teeny-weeny crap that may still be lying around, will be cleansed by Akshay Kumar, one flush, one more sycophantic film at a time.

The pandering is so obsequious that the media — desi and foreign — is duly dissed, and demonetisation invoked as if it were a Brahmastra that’s already destroyed all evil.

Worse, there’s not even an acknowledgement of the irony that Gandhiji and his ideals have been reduced to toilets. And forget intervention, there’s not a single mention of the men and women who have for centuries cleaned upper caste shit.

As far as I know, nobody from Dilli sarkar has gone out yet, officially at least, to recruit Akshay Kumar to become its chief propagandist in Bollywood. But then, a national award for a pretty third-rate film with third-rate acting is a divine bulawa of sorts.

Akshay Kumar’s Toilet: Ek Prem Katha is a response to that Modiji ka bulawa. And it is fully in servile service of PM Modi and his favourite chief minister.

That’s sad because Akshay Kumar is in excellent form here. He’s always had very fine, very sharp comic timing, but here we get to see him in his more natural form.

There’s an intrinsic chichora-pan in Akshay Kumar that, when set free, dances about on the screen with delightful abandon. It’s insanely funny and inimitable.

For a decent amount of time, Toilet: Ek Prem… offers us the pleasure of watching him be loosely jhalla.

Next to him is the warm and expressive Bhumi Pednekar. She was excellent in Dum Laga Ke… and though the role she plays here is quite similar to that one, there’s a living-breating realness to her that’s very attractive and endearing.

I just wish that preening next to her, Akshay Kumar wasn’t slowly transforming into a mukut-dhaari, lion-straddling Bharat Mata. But he is.