Kaalakaandi movie review: A niche in its own genre

The film is certainly an entertaining watch, but the plots are a little milder than they were portrayed in the trailer. 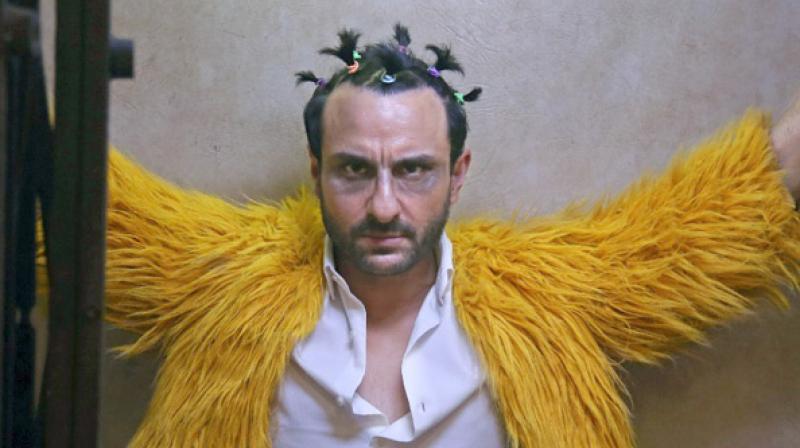 In a country like India, which ranks on the second number in public binging on Netflix, it is difficult to woo audiences with an adult comedy, especially when the film is being directed by the writer of Delhi Belly, Akshat Verma. Kaalakaandi is certainly an entertaining watch, but the plots are a little milder than they were portrayed in the trailer. With an uncanny screenplay and English dialogues, the film is a niche in its own genre.

Saif pops up a psychotropic drug after he realises that he is soon dying of stomach cancer, in the midst of his brother Akshay Oberoi’s wedding. Akshay’s would-be wife Amyra Dastur is madly in love with him, but the former is stuck with his ex-lover, who is a hot ‘firang’ babe. Isha Talwar joins them to shoot their wedding, but finds love in Saif eventually. Meanwhile, Saif hallucinates and takes everyone on a joyride.

Kunaal Roy Kapur desperately wants to exchange vows with his long-time girlfriend Sobhita Dhulipala who is soon leaving the country to Boston for her PhD. Sobhita drags Kunaal to her friend Shenaz’s birthday party, but unfortunately gets stuck in a police raid.

Deepak Dobriyal and Vijay Raaz are small-time gangsters and loyalists to their boss man Neil Bhoopalam. In the greed for more money, the two plan to fool their chief, but their life changes upside down when they both stand against each other.

Akshat has beautifully crafted each of his character. They are real, funny, witty, silly and full of appropriate gestures. Keeping the genre in mind, he skillfully weaves his stories together throughout. You will enjoy the rush, drama and intensity in the stories, but what you will miss the most is the depth of it. Stories have weaker plots, but they are smartly backed by a hell lot of abuses and strong relatability factor. Kaalakaandi is not a masterpiece to be kept in the Oscars library, but it is f****** contemporary.

Saif has been performing quite well lately, and he is relatively a decent actor. His act in Chef was good, but in this one, he is simply brilliant. He is ridiculously hilarious when he hallucinates. His pain of dying at an early age is visible. Akshay Oberoi is too good with his perfect dialogue deliveries. He seems to be the master of his vocabulary. Isha Talwar and Amyra Dastur are sweet enough in their brief roles.

Kunaal Roy Kapur is real and how. He is too funny as a sugar-coated boyfriend. Sobhita is a kick-ass performer as she makes you glued to her on screen. Shenaz did a terrific job as a drunken girl who spills over her boyfriend Shivam Patil every single minute.

Deepak Dobriyal is funny and concentrated at the same time, how nicely he slips in and out of his character. Vijay Raaz is a jack of all trades. Neil Bhoopalam is watchable. Their chemistry makes their part more intriguing than the rest of the two.

Kaalakaandi is a cocky cocktail and a messy affair. If contemporary gritty tales are your cup of tea then this one is a delightful watch but don’t expect a twisted plot!