If Qarib Qarib Singlle finds its anchor in Jaya, it draws its power and mojo and the heady promise of romance from Irrfan Khan. 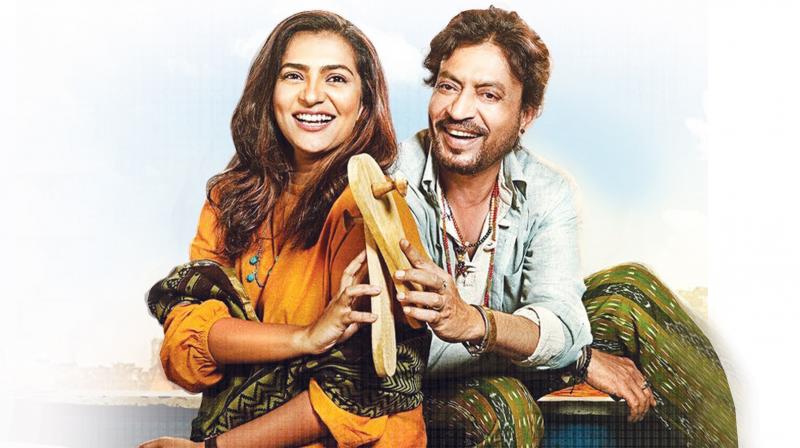 Aap-ne prodh shiksha ke bare mein toh suna hi hoga? I mean, adult education, where adult log are cradled gently and taught Ka, Kha, Ga… One, Two, Three? Qarib Qarib Singlle is a prodhlove story where writer-director Tanuja Chandra takes on two 35-plus adults and walks them through the A, B, C of life, love, and love for life.

Already, given the choice of the age band of its lovers, QQS feels like a hatke film. In fact, in the broad brushstrokes that make up its two main characters, there are enough hatke details to entice us into thinking, hoping that QQS will be delightfully hatke all through. It’s not.

Its prodh people’s prem is platonic and swachch. Those double LLs in the film’s title are not a naughty allusion to some hanky-panky, as in vertical action, one-on-one. They are simply a promise that it’ll make two singletons a happy twosome.

The tinkering is cosmetic and on the surface. Despite the choices it makes and the average age of its couple, at its core QQS is conventional and very adolescent. The film, in fact, follows all the traditional Bollywood rules of sanskari dating and romance.

But, Qarib Qarib Singlle is also charming as hell because Irrfan Khan and Parvathy make the best unlikeliest pair ever and that makes this film — essentially a long date where we know what’s going to happen eventually — entertaining and fun.

Qarib Qarib Singlle begins after the first instalment of life — of Jaya (Parvathy) and Yogi (Irrfan Khan) — is over. They’ve been through one set of relationships/marriage, and are now lolling around in life’s fallow bits, waiting for life to begin again... or not.

The film’s title sequence is devoted to showing what being a single woman means — it’s a life where lizards stare down from the ceiling, the dhobi/milkman always bajaaos the bell at the wrong time, and acquaintances feel entitled to use and insult them.

The film shows, in cute and compelling but, more importantly, slightly wistful detail how sad a single woman’s life is, how desperately incomplete she is, without so much as a peek into what a single man’s life may be like, or an aside about the joys of freedom, of being on your own.

So, Jaya’s life is neatly split between being a bechari to her friends and family members, and being a bitch to her office colleagues.

Tired of being punched in the face, repeatedly but figuratively, by friends who are unable to define or introduce her without mentioning the lack of a man in her life, she logs on to a dating site.

Enter Yogi, a chemical engineer who writes poetry, likes to run, is fond of mangoes and has all the time in the world to enjoy a slow walk, a long, desultory chat, and keeps himself entertained by laughing at his own lame jokes.

Jaya is English-speaking, sophisticated, cautious, but all this is either disapproved of or kind of irrelevant in the world that now gets created by Yogi’s presence. These qualities, in his carefree, North Indian world, are the butt of many jokes.

Qarib Qarib Singlle disapproved of Jaya's attitude to life from the start. Now she is seen and framed as a set-in-her-ways, closed minded, uncool woman, whereas Yogi is the free spirit who keeps life at an arm’s length, observing, watching, taking his time to decide whether it’s really worth his attention.

The film is so skewed in Yogi’s favour that it gives Jaya germ phobia, a knuckle-cracking habit, and an addiction to sleeping pills, whereas Yogi is presented as the font of chill pills.

Consider this: Jaya drives her own small car, struggles to manage her home, and gets told off by her mother, brother, friends, even parlour aunties, about lack of sex, a man, a life...

Yogi, on the other hand, seems completely in control of his life with Dillu the driver at the wheel of his Merc. Nothing is said about where he’s been getting action — translation, he gets laid.

I mean, what more screams, “Come and take care of me, please”.

It’s to director Tanuja Chandra and her two actors’ credit that all this is done nicely — in a tone that makes this patriarchal mindset seem as if it’s the truth only, and it helps that Yogi is tuned into other people’s needs, especially Jaya’s.

He’s insistent, persistent and pushes her, crudely but cutely, to keep meeting him and very soon they are off on a trip — to Rishikesh, Jaipur, Gangtok.

This trip is a strange, badly engineered ruse for a long date. A result of a boast about past, epic romances that left the dumped one devastated, all that this trip throws up are some mild personality flaws: she’s veg, he’s non-veg; he often misses the bus, literally. But, again, that’s because he floats through life, sometimes gazing at the stars, sometimes with his head in the water blowing bubbles, whereas she tries to swim fast, from point A to B, using all sorts of strokes.

Obviously, his character drives the plot — and her moods. And, sadly, the episodes that follow are contrived, written badly and inconsequential except to make the point Jaya made at the very the beginning — People move on, the past is past…

Director Tanuja Chandra’s film — its story’s been written by her mother Kamna Chandra, dialogue are by Gazal Dhaliwal, and the screenplay’s been co-written by Tanuja and Gazal — is both, adorable and annoying.

QQS pretends to be liberated, evolved, mature by taking on adults with a past, but all it’s interested in is helping Jaya find a mate.

The film is also flawed in its plot details, screenplay. During the trip, we learn nothing about Jaya and Irrfan’s past relationships, of real, emotional complications about starting life afresh. All we get are silly, stock scenes — including one where she’s drunk and gets all touchy-feely — or convoluted, meaningless encounters that eat up a lot of time.

There are no real conversations between them, as if the sanskari film is scared that intimacy will lead to sex.

Also, despite an ensemble of supporting actors, no other character comes alive. All they get are two lines and a title — Annoying Parlour Aunty, Sweet Taxi Driver, Brother on Skype... If Jaya and Yogi had just stayed in Bandra and sipped Latte while exchanging more nuggets about the joys of mangoes and pakodas, Qarib Qarib Singlle may have been a slightly better film.

That’s not to say that Qarib Qarib Singlle doesn’t work. It does, because sitting inside this annoying setup is a heart, pulsating and excited at giving life another shot. And because its lead pair is beautifully mismatched and yet in sync, and played by excellent actors.

Poised and self-possessed, Parvathy, of Charlie and Take Off fame, is lovely and inhabits her character with confidence and a measure of ease that’s very appealing and, well, sexy.

Though she’s in control in most scenes, in a few she overacts and is all over the place. I’d put that down to lazy writing and bad dialogue. Her Jaya is the sweet, warm foil to the crazy but charming Yogi.

Qarib Qarib Singlle finds its anchor in Jaya, but draws its power, mojo and the heady promise of romance from Irrfan Khan.

Though Irrfan Khan’s acting now is made up of predictable mannerisms — especially when he’s playing voluble characters — his ability to slip in a mumbled asides/comments/insult under the table, only for our benefit, win us over. Always.