Clearly we are in Kalyug because in a film starring Kamal Haasan I am writing about another, much lesser actor. 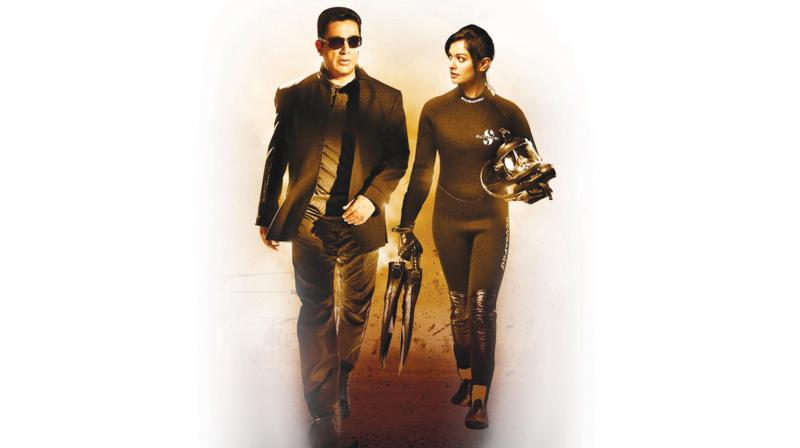 Vishwaroopam may well be titled Vishwa-bhookamp (a world-wide earthquake) because it, literally, turned my world upside down, inside out.

Kamal Haasan is the only Indian actor who, neck’n’neck with Mohanlal, has received three national awards. He is also an actor I can watch on a loop and never, ever get bored. Sadma, Nayakan, Pushpak, Appu Raja, Mahanadi, Thevar Magan, my all-time favourite Chachi 420... and many, many more.

But now I have lived to see the day when, while watching Kamal Haasan share the screen with Rahul Bose, my mind actually began to curdle and seep out of my ears. I kept wondering if I was in an alternate universe because Bose the bore was infinitely better than Haasan.

Kamal Haasan, whose brilliance is forever etched in my heart and mind, is so, so bad — here just a figment of the talented actor, director he once was — that all his national awards should be taken back and returned only when he promises, Gita aur Gautami pe haath rakh kar, that he will never again direct a film in which he is the star.

Vishwaroopam II (which has been unleashed simultaneously in Hindi, Tamil, Telugu and Malayalam) blares to announce the arrival of the star in inarticulate screaming and drumming where nothing makes sense and neither is it meant to. It’s just supposed to be a rousing instruction to us to brace ourselves for the return of the great superstar.

Unlike its predecessor, Vishwaroopam II doesn’t even pretend to have a story. It has some contrived situations that exist only to pander to the superstar’s super ego.

These situations stem from some August 2011 terror plot involving the evil Omar Qureshi (Rahul Bose), an Al Qaeda operative, and the attempts of RAW agent Major Wisam Ahmad Kashmiri (Kamal Hassan) to thwart them. Much like he did in the 2013 Vishwaroopam.

We get a back story about a young major training one Lieutenant Asmita Subramaniam (Andrea Jeremiah) and together they are disgraced, court-martialled and sent to jail.

However, since the film pivots on the premise that a useful desh bhakt is never, ever jailed, and he is never, ever off dooty (duty), we get another back story where Wisam penetrated Omar’s inner circle. Omar began to trust him, but Wisam worked for — as the film’s best dialogue puts it — “Uncle Sam ki behen Mother India”.

While the film gives Omar a grouse against Wisam and the West, both of whom he wants to blow up, it gives our undercover RAW agent desh ki bhakti and a litter of idiotic, geriatric bosses and double-spies who do not operate in slo-mo, but look as if they are.

Their meaningless dawdle and lumbering movements are sleep-inducing.

Wisam arrives in some part of the world from another, with that annoying Lieutenant Asmita in tow. They are on a covert operation to do satyanash of bad-bad terrorists. But Wisam also has wife Nirupama (Pooja Kumar), a nuclear oncologist, tagging along. She mostly seems confused when listening to desh ki secret missions and would rather just make out. At least on their suhaag raat, yaar.

But dooty is always beckoning. And there’s mummyji in a wheel chair (Waheeda Rehman) he has to introduce to her.

So noble and good is Wisam that I was worried the sun may refuse to rise from anywhere except his now ample backside.

While the two women have a lame fight over Wisam, the plot turns into a moron’s playfield where people who try to cross or kill our spy get killed themselves. Either their guns jam at the right time, or some eyeballs simply, literally, roll out of their socket as if sulking at having to watch a desh bhakt get hurt.

Given that Vishwaroopam is an action film, its stunts are hysterically horrible. Kicks are awkward, and the punches of the oldies are delivered delicately, lest they hurt their own ageing bones.

There is, however, lots of chopping and slashing and oozing blood.

In one scene, as blood oozes out of a big gash on a good RAW man’s throat, as if someone has put the bloody shower inside him on full stream, Wisam drags a dead deshdrohi for him to see. The big red bindi decorating bad guy’s forehead — i.e. entry wound of our desk bhakt’s goli — brings the dying agent back to life smiling, but only for a bit.

Then there’s Jag, short for Jagmohan (Shekhar Kapoor) who takes the longest pee break in the history of cinema. And when he steps out with his gun, looking for the spy who has turned, by the time he gets to him in the next room, that man (Anant Mahadevan) has shot himself, probably out of boredom.

Lagta hai that we have fallen upon days when, if you lehrao the national flag, anything goes.

Yet, it’s an education to come across a film so badly written, acted and directed.

For example, when pieces of Wisam’s colleague arrive on an ice cube in the dicky of a car, or when his mother does not recognise him, Kamal Haasan starts to pant with his mouth open, exhaling rather heavily as if an asthma attack were tickling his toes.

If this is being doled out in the name of acting, I thought, it’s good that the two ageing superstars in south are variously announcing their retirement from films and trying their luck at politics.

Nothing is scarier than oblivion, perhaps, after you are used to being mobbed and hailed as God.

Used to so much love and adulation, superstars can’t simply retire and spend their time reading newspapers with the morning cuppa and watch the world pass by. Used to living in a cosmos where they were the shining stars, they want to extend their stay, fight irrelevance.

I support their political ventures, if only to avoid being subjected to such atrocities ever again. Superstars directing themselves has got to be the worst idea, ever. It must be stopped.

I have always found Kamal Haasan’s macho, jingoistic politics problematic. So even when he tries to make vague secular noises here — Indian Muslims good, other Muslims bad — it made me balk. That is when I wasn’t dozing off.

The only thing that forced me to open my eyes fully was Rahul Bose. He had great make up, and his burnt skin, wonky eye and the weird wheezing voice created a rather stunning, creepy package that he delivered nicely.

Clearly we are in Kalyug because in a film starring Kamal Haasan I am writing about another, much lesser actor.