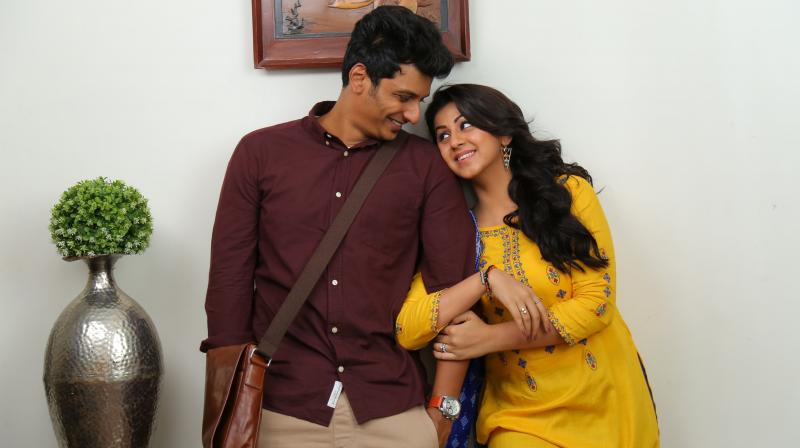 The hazards of technological growth and a keyboard or a smartphone is enough to hack networks and alter the world order was the theme of Vishal’s 2018 cyber crime thriller Irumbu Thirai. Jiiva’s Kee also deals with a similar theme but while looking good on paper for a techno thriller, the impact is diluted with its implausible explanations, forced commercial elements like corny comedy, father-son sentiment and logical loopholes.

Siddharth (Jiiva) is a college student and an extraordinary ethical hacker who leads a happy life. He discovers a new virus called ‘Baasha Virus’ and befriends many young girls hacking their mobile phones and also helps his friends in exams. He hacks the phone of a TV news reporter Vandhana (Anaic Soti) at a pub and they soon become friends. Vandhana is investigating a crime where people get killed in accidents and suicides under mysterious circumstances. When she is about to crack the case and reveal the shadowy man and master hacker named Shiva (Govind Padmasoorya), Vandhana is killed. Meanwhile, retrieving a hard disk from Vandhana’s locker, Sid comes to know of Shiva. However, Shiva is after the lives of Sid and his loved ones including his lover Diya (Nikki Galrani).  Now, it is retribution time for Sid.

Jiiva is energetic and gives an impressive performance. Malayalam actor Govind Padmasoorya is equally effective. While Nikki Galrani is just about adequate, Anaica fits the glam quotient. RJ Balaji’s double meaning jokes do not evoke laughter.  The (sentimental) portions involving Rajendra Prasad and Suhasini are clichéd.  Had the director concentrated on a coherent screenplay without commercial trappings, the film would have turned an engaging techno thriller.