Alia Bhatt is cute, pretty, efficient, but same old. Varun Dhawan, on the other hand, is interesting. 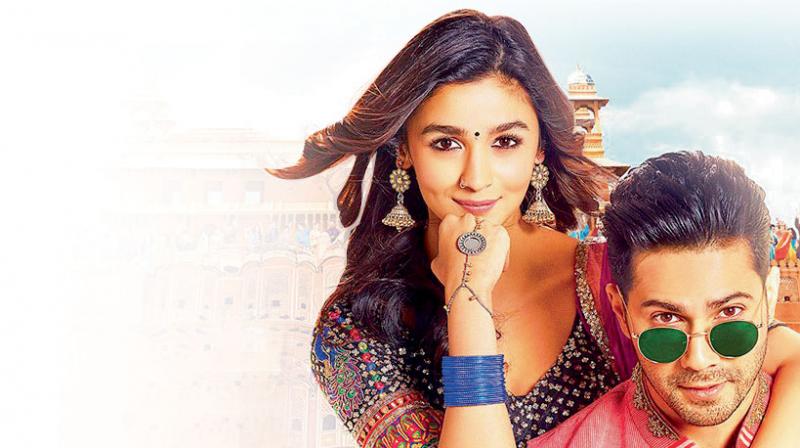 A still from the movie Badrinath Ki Dulhania
Rating:

Let me declare this upfront: I’ve had a lingering frown ever since Karan Johar decided to not just mock Kangana Ranaut’s English, but to also present himself as a gracious but exasperated host who decided to retain and telecast all that she said about him on his show despite the fact that she was being a whining woman.

Did he not watch his own show?

Ms Ranaut was kicking ass and calling him out, and what Mr Johar did thereafter qualifies as A-grade whinging, as well as severe self-deception.

Mr Johar defines nepotism conveniently, but he exercises it generously.

If you can hold back your puke, just watch the genuflection he repeatedly does in all his films to DDLJ and other such. Or, go through the guest list of his show, if not the cast and crew of his films. It’s hamara saath, hamara vikas.

But I labour the point, and digress. Simply put, Badrinath Ki Dulhania is produced by him and stars two Bollywood kids he launched.

So you’ll understand, I hope, why I’m not favourably inclined towards any progressive, feminist messaging from him.

The Bansals are the proud proprietors of a car showroom and they are loansharks. They also live in a huge haveli where Papa Bansal (Rituraj Singh) harbours a rather common patriarchal, penile ego. In his world, and the world of those orbiting around him, a boy is an asset, and a girl a liability.

A boy’s worth must be encashed at the time of his wedding, paid by the girl’s side. Badri’s pal, Somdev (Sahil Vaid), runs a match-making matrimonial site, ChutkiMeinShaadi.com.

Badri, who is entrusted with collecting loan repayments, lands up at a wedding in Kota, Rajasthan, where he encounters Vaidehi Trivedi (Alia Bhatt), carrying heavy baggage from her past and secret dreams of a life free of the oppressive talk of shaadi and dahej.

The lead pair is the same, and so is their situation.

They were not married when that movie opened, and they are not married here. And like Humpty, Badri is dedicated to getting his dulhania.

While in Humpty..., Kavya (Alia) was in pursuit of a designer lehenga and her friend’s blackmailing boyfriend, here she’s keen on getting her sister married and pursuing her dreams.

There Humpty helped her get the lehenga and extract revenge, and here too he helps her sister get married and paves the way for her to take off.

But there’s a difference. Badrinath Ki... has a moral finger it wants to wag, some messages to deliver.

In between all the goofy silliness of Badri pursuing the fiery but cute Vaidehi, her parents go to meet the prospective in-laws of their eldest daughter, Kritika. And that’s where Badrinath Ki… captures that moment when ladke-waale, entitled, smug and posturing as the burdened saviours, demand a random, intimidating amount, and the girl’s father (played nicely by Swanand Kirkire), grateful, humble, humiliated, says, “Arrange kar lenge.” It’s a deeply affecting moment.

But it’s also a fraud. More about this later. Vaidehi does unto Badri what another man had done unto her. And so Badri goes after her, to Singapore, to ask why.

The trip comes after duly acknowledging the good services of an airhostess training school. And in Singapore we are subjected to long sequences about the thorough professionalism of an airline that operates out of India.

Bollywood has been selling us dreams of love, the blissful ever after for decades now. And its hold over silly, senti Indians remains firm.

Bollywood cracked the formula decades ago and that formula — invoking emotions around papaji and papaji ki pagri, the do-or-die game of love — still has the power to make us teary-eyed and, eventually, happy.

But these days the dreams Bollywood is selling are powered not just by creative compulsions, but also hard commercial arrangements.

Plugs are always revolting, but they are not new. But Badrinath Ki..., like many other films of the shaadi genre, does much worse.

It shows, for example, Kritika happily married in London, but it doesn’t show us how her parents are coping after being forced to pay dowry they could not afford.

Badrinath Ki... takes us to Singapore to show us the joys of independent women pursuing careers, and two individuals wanting to build a life together, but it also makes sure that elder brother Bansal has twins — a boy and a girl — with whom Papa Bansal, duly chided and censured, now plays happily.

And in any case, the lead couple is sooo cute, and it’s a happily ever after love story…

A large part of Badrinath Ki... has been shot on location, in Kota, and that is one of its main pluses.

But it’s too similar to Humpty..., and slightly lesser. While Humpty was a copy of DDLJ (obvio; it was produced by Karan Johar), this one nurses a hangover from a cocktail of popular Bollywood films, puking out undigested bits every once in a while.

The two boys who played Humpty’s friends are here as well, Gaurav Pandey and the fabulous Sahil Vaid.

Alia Bhatt is cute, pretty, efficient, but same old. Varun Dhawan, on the other hand, is interesting.

Dhawan is a good actor. From twitching his nipples to playing a homicidal killer in Badlapur, he’s been more than competent. But lately something’s gone wrong.

Around women, especially Alia, he has a tendency to infantilise himself by pulling his mouth in exaggerated vowel formations, as if he were doing the voice-over for Daffy Duck. In emotional scenes, he gives this I’m-so-intoxicated-on-pain look where he practically goes cockeyed.

Despite this he’s good, and he and Alia Bhatt together eat up the screen. There’s no room for another.