One reason for that, of course, is that in the patriarchal priority list, women’s sexual violation is a blot on the khandan, acid attack not quite. 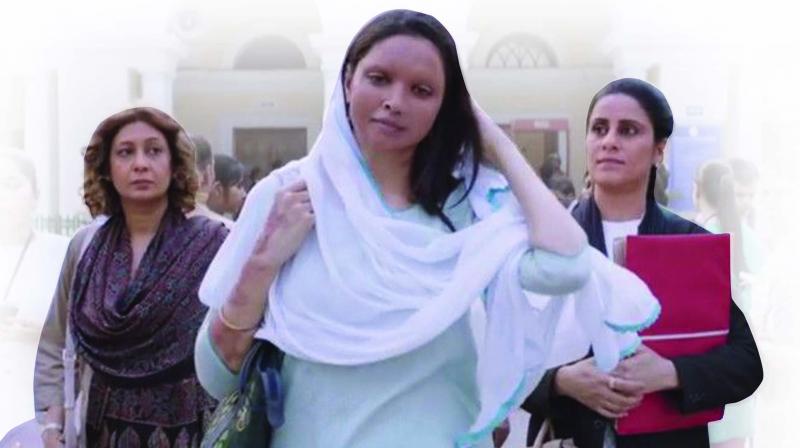 The writers have not so much cast Deepika as Laxmi, but have cast Laxmi, the girl who wanted to compete in Indian Idol, as a Bollywood heroine.
Rating:

With a big-ticket commercial star at its centre, Meghna Gulzar’s Chhapaak carefully walks a razor sharp line to mainstream a brutal crime against women that has been lingering in the margins — not just of the criminal justice system, but also of people’s collective rage.

Chhapaak tells the real-life story of Laxmi Agarwal — who was attacked with acid at the age of 15, by 32-year-old Naeem Khan in 2005 — with palpable sensitivity and clarity of purpose.

Along with Laxmi’s story, Chhapaak chronicles this heinous crime against women that is unique to patriarchal, feudal societies, including India, and is particularly grisly in its intent and impact. Yet, it is not talked about with the seethe and tear that accompanies rape.

One reason for that, of course, is that in the patriarchal priority list, women’s sexual violation is a blot on the khandan, acid attack not quite.

But beyond that, perhaps the reason why it’s not talked about enough is not because people are insensitive to it, but because the sheer barbarity of it, the unimaginable pain inflicted makes people freeze with horror. And words — especially of sympathy — feel entirely inadequate, rude even.

Chhapaak is extraordinary and significant because it gently, and with dignity, breaks the ice. It makes us see the victims of acid attack, and helps begin a dialogue.

Meghna’s feminism and composure as director, complemented with Deepika Padukone’s warm performance, and Clover Wootton’s makeup have forever changed how acid attacks and its victims will be viewed and talked about in this country.

Deepika Padukone, a Bollywood A-lister around whose beauty several films have been constructed, deserves a bravery award for taking the risk of playing an acid attack victim.

She brings her heart and infectious charm to her character and, in some moments, when she taps inside herself and into Laxmi’s experience, we see both, vulnerability and quiet determination. There are also moments when her eyes twinkle as she breaks into a life-embracing smile, giving us a glimpse of the adorable and formidable Laxmi. In those moments, Deepika touches you.

But those moments are few. Mostly she remains Deepika, despite the incredible prosthetics and makeup.

That’s partly the fault of the director, but mostly of the writing (Meghna Gulzar has co-written the film with Atika Chohan). The writers have not so much cast Deepika as Laxmi, but have cast Laxmi, the girl who wanted to compete in Indian Idol, as a Bollywood heroine.

Chhapaak, written in Bollywood’s fail-safe template, is too filmy. This story deserved its own narrative tone and style.

But Chhapaak’s strength is that while it works within that Bollywood song-and-dance template, it is sensitive to what it shows, how it shows it and why. And this balancing act, between commercial compromises and determination to steer clear of demeaning melodrama, is there throughout the film.

Chhapaak does not solicit our pity.  It does not turn acid attack victims into becharis. It does not goad us to shed tears.

Every time there is sanctimonious breathing by an activist, or a patronising comment, or a child screams in shock, or a stranger’s stare lingers on the face for a second too long, the film flinches with distaste and moves away, never allowing it to turn into self-gratifying pity.

But, it does sell acid attack victims a Bollywood dream. While that is cute, it is also cruel.

Chhapaak opens in December 2012 Delhi, in the middle of protests against the Nirbhaya rape, and it immediately broaches the topic of acid attacks — of the crime and its victims being treated as lesser than rape victims.

Amol Dwivedi (Vikrant Massey), who runs an NGO that cares for acid attack victims, is at hand to harangue reporters and remind them of Malti.

We meet Malti (Deepika Padukone) and in a quick succession of scenes we see what she is struggling with in her desperate search for a job, some income. Though she’s good at her beauty parlour job, she is not a presentable employee.

Malti always looks straight at everyone, seeing how she is being seen, and most of the people she approaches for jobs can’t get past her face.

Shiraz aunty, at whose house her father works, has taken care of her surgeries and helped her with a lawyer, Archana Bajaj (Madhurjeet Sarghi), who is not just fighting her criminal case but has also been pursuing Malti’s PIL in the Supreme Court to ban acid.

Alongside more rounds of plastic surgery, her job, Malti is often in court, not just to prove the accused — family friends Bashir Khan and Parveen Sheikh — guilty, but also to fight against IPC’s Section 326 wherein the maximum jail sentence is just seven years.

Running parallel to Malti’s attempts to piece together a life for herself are the lives of the culprits — proceeding unaffected by the crime they have committed.

At the NGO there are often urgent calls to tend to other, new victims of acid attacks, including two sisters who are targeted by upper caste men in their village because they aspired to become software engineers.

Amol is forever miffed with the world for not caring enough, not doing enough for acid attack victims. And he is not wrong. But his relentless harangue comes from an egoistic place, he exudes piousness about “his” cause, and that, in the presence of an acid attack victim, feels obscene.

Sometimes Malti tells him off, sometimes she sticks out her tongue at him.

The flashback is cleverly placed, towards the end, because the film wants us to first meet and see the acid attack victim, and not Deepika.

Chhapaak in Hindi means “splash”, and the film’s title seeks to convey how, just one splash of acid changes lives forever. But Chhapaak, the poetic, onomatopoeic word, is also a euphemism for a brutal crime, and as is the case with casting Deepika, it seeks to make the unpalatable palatable.

Meghna Gulzar’s Chhapaak shows us the brutality of the assault, but instead of opting for a voyeuristic, invasive gaze, her film opts for heartfelt humanity that sees in the scars and the self-conscious, diffident demeanour of acid attack victims courage, dignity, and a will to live.

Chhapaak’s greatest feat is that it puts the crime front and centre, making the “kyun?”, the why, the peering inquiry into the girl’s, the victim’s life completely irrelevant.

Chhapaak treats acid attacks as violent, criminal acts of men with frail but massive egos, desperate to feel their power “by showing a woman her aukat”, by punishing her for having dreams and aspirations of her own.

With a bottle of acid that costs `30, they try to hold her hostage for life.

The film deliberately doesn’t pursue the motive of the woman who is a co-accused in Malti’s case, suggesting that it is pointless. The evidence of the crime is there for you to see, and that should be enough.

While this sensitivity and care burnishes the film, Chhapaak’s screenplay is rather sparse and episodic, devoted entirely to its lead star.

Whenever Malti is on the screen, the film shines and seems to have a purpose. But when she is not, Chhapaak seems quite uninterested in itself and drags its feet in a half-hearted manner.

Luckily, Chhapaak is short and what stays with you after the film is over is Deepika’s brave act, Vikrant Massey’s stunning ability to be an amalgamation of many characters and emotions at the same time, and the girls — acid attack victims who struggle, fail, who don’t understand why this happened to them, who seek justice but also a sliver of normal life. And that sliver sometimes comes with the reconstruction of a melted ear on which an earring can dangle, its happy swing lighting up not just their face, but our insides too.