Office Christmas Party movie review: This party is a dud

The titular party in the film is just an excuse to display a variety of stunts and play loud music. 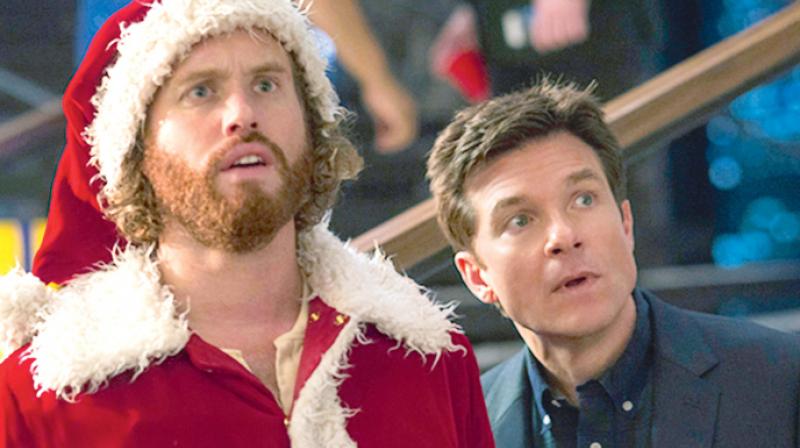 A still from the movie Office Christmas Party
Rating:

Unlike most Christmas-themed films which are meant for family viewing, Will Speck and Josh Gordon’s Office Christmas Party tries very hard to aim at adult audiences. They have succeeded in getting an “A” certificate, but the content remains as immature and inane as one can imagine, wherein vulgarity becomes a substitute for wit.

Carol Vanstone (Jennifer Aniston) becomes the new CEO of Zanotek, replacing her brother, Clay (T.J. Miller) and, along with him, many office policies, such as those on Christmas parties. Zanotek’s Chicago branch has been struggling under Clay’s leadership, and if Carol has her way, laying off 40 per cent of their employees and foregoing the remainders’ Christmas bonus would keep the branch from getting derailed. Clay and Josh (Jason Bateman) are desperate to clinch a deal with Walter (Courtney B. Vance) in an attempt to save the company, and in order to impress him, they throw a wild Christmas party at their office against Carol’s orders, believing that she is in London. Thus begins a series of raucous, drug and alcohol-fuelled events, which include — but are not limited to — having a cocaine-peddling prostitute stand in for a girlfriend; acting on weird, repressed fetishes; and swinging from the fairy lights a la Tarzan.

It is not easy to find any flaws with the actors in the film. Jason Bateman is the quintessential good guy who does the right thing. Kate McKinnon is hilarious and repulsive at the same time. They have been honing their craft in the genre of comedy for years, and it shows. What one can take issue with, however, is the characterisation. Why must a woman CEO be a “boss b***h”? During a brief moment of introspection, Clay admits that as a straight white American male, who was born with a silver spoon in his mouth, he has never had to ask for much. His sister, Carol, on the other hand, got the short end of the stick until their father’s death, because Clay always received preferential treatment from him. Women still have many, many glass ceilings to break — last month’s US elections are a stark reminder of the grim fact — but according to the writers (Justin Malen, Laura Solon, Dan Mazer) the only way a woman can achieve that is by being cruel to everyone around her, including other women and children. So we have Carol tearing off Christmas decorations because she couldn’t care less for parties; manipulating her way to prove her brother a failure by offering his best friend a more lucrative option; questing Tracey’s (Olivia Munn) credentials when she comes up with a new pitch. Clay is, without a doubt, a wastrel, an inept leader; Carol understands her job well and knows that the excesses of partying will never get the company where it should be. When Clay goes ahead and gets wasted, it is Carol who single-handedly kicks some ass. And yet, it is as if the writers do not want her to be a likeable character the way Munn’s and McKinnon’s are. In this subplot of sibling rivalry-come-battle between the sexes, there are no prizes for guessing who proves whom wrong in the end.

The titular party in the film is just an excuse to display a variety of stunts and play loud music and let people behave embarrassingly (which is passed off as entertainment).

At some point before the end of Office Christmas Party, Jennifer Aniston asks no one in particular, “What’s that smell?” In answer to this, Kate McKinnon says, “I’ll be honest with you. I’ve been farting the whole time.” This interaction neatly sums up the colossal mess that this film is; it stinks.