Problem is that Akshay Kumar is too obviously driven by the later — egoistic, self-promotion instinct. 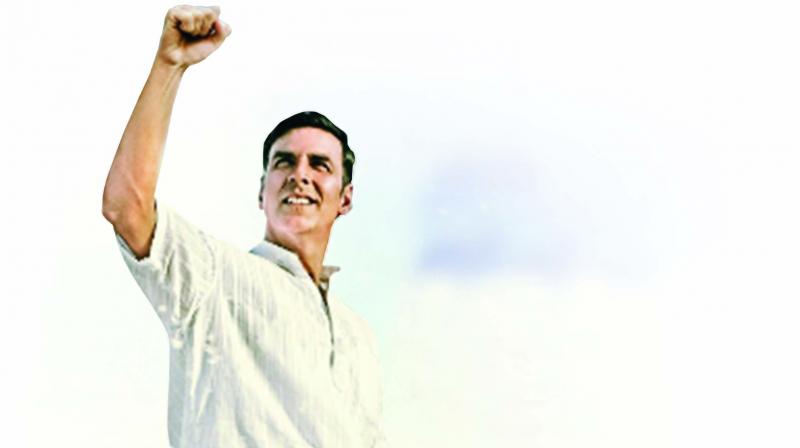 A still from the movie Pad Man
Rating:

Sanctimonious moral indignation that arrives with a genial, gummy smile but is then unleashed with deeply earnest words is a deadly package. It’s hard to criticise and almost impossible to beat.

They are eeky subjects and when a man takes up cudgels on behalf of women’s easy access to them, wrapped up in beti bachchao emotion, too many are floured.

So, an alpha superstar waving the sasta, tikau sanitary napkin, then placing it in a pink panty and putting it on to experience for himself how women chum is so revolutionary a sight for the Indian screen that many will clap and hoot.

But it’s one thing to want to tell an inspiring, interesting story that involves a man’s grit against prejudices, taboos that are harming women, and quite another to seize it as an opportunity to further toady up to the powers that be and burnish your own credentials as Bollywood’s No. 1 nationalist producer-actor.

Problem is that Akshay Kumar is too obviously driven by the later — egoistic, self-promotion instinct.

Though based on the life, work, struggles and triumphs of Arunachalam Muruganantham, a simple but singular man from Coimbatore, Pad Man doesn’t do him the courtesy of calling its lead character by his name. It also isn’t set in that south city, choosing instead Varanasi, the constituency of Narendra Modi.

But since vanity thy name now is Ageing Bollywood Stars, a strange romance is bestowed upon him that neither the film nor we needed.

I felt mildly informed about what sanitary pads are made of, but also thoroughly bored and exhausted by this Akshay Kumar ego trip.

If you do watch Pad Man, here’s a game you could entertain yourself with. Count the number of scenes or frames in the film which don’t have Akshay Kumar, and if you hit double-digits, WhatsApp me.

Pad Man, set in 2001, opens to a lovely song when the shaadi, suhagraat of Lakshmikant Chauhan (Akshay Kumar) and Gayatri (Radhika Apte) is underway.

In the course of that song we learn that he’s in love with his wife and very tuned into anything that bothers, hassles, hurts or is detrimental to her well-being. Soon, onions present him with the first opportunity to do something for her. And then the cycle carrier.

Thoo-thoo on men, the film seems to say, who have walked past women weeping pyaaz tears or haven’t found inspiration for invention when they’ve seen women massaging their sore bums after a ride on their bicycles.

Lakshmi is in love and in touch with his inner aurat and she goads him to do stuff for Gayatri. And since Lakshmi works in a karkhana where he fixes, welds stuff, it’s not a long journey from idea to a workable appliance, instrument. After small-small tests that serve as warm-up, arrives the big challenge: Gayatri is sent tadipaar from the house to live in its outskirts, i.e. balcony, for five days of her periods.

Lakshmi is shocked. He doesn’t get it, which is strange since he’s grown up in a house full of women — his mother and two sisters. But having just stumbled upon it late in life, this auraton ki dikkat agonises him. He’s tortured with thoughts not so much about why they are considered apavitra, but how unhygienic the cloth Gayatri uses is.

So, like Mr Muruganantham, he purchases a packet of sanitary pads, but it’s too expensive. If all women in the house start using this pad, there’ll be no money left to buy milk. So off he goes to a mystical place where there’s a little pond surrounded by flowers and kept warm and well-lit by the lovely, golden glow of a smiling sun to create a pad.

Gayatri uses it, but it leaks. So he tries again. That leaks as well. Embarrassed, fed up with his monthly menstrual obsession, she refuses to have anything to do with his concoctions any more. But the thought that some women use ash and some die of infection drives him to peddle his pads to family, friends, sisters, girls of a medical college.

Accidents happen, people say things and each one serves as a learning experience, a light-bulb moment, to inspire him to keep improving his pad.

He’s taking, thinking only hygiene, suraksha, they are saying sharam, besharam. He is misunderstood as a freak, pervert, a man with his head and soul stuck between women’s legs, even a dheele nade waala aadmi (man with a loose pajama-nada). Gayatri experiences more shame and goes to her parents house to sulk, setting him free to convert her sharam into sammaan.

The second half of Pad Man stars two things — loads of stupidity and gibberish, and another leading lady, Pari (Sonam Kapoor). The tabla playing fairy, who takes Lakshmi and his pad mania under her charming wings, helps him take flight. Soon, awards, speeches in august settings follow.

There are some sweet, warm moments in writer-director R. Balki’s Pad Man. And most of these are either scenes when Lakshmi’s obsessive endeavour actually changes the lives of women, or when he delivers his speeches, especially the address to the UN. That’s one of the many problems with this film. Throughout the film, Akshay’s Lakshmi has artificial, stagy conversations with most characters, including his wife, saving all the heart-felt stuff for the camera and us.

In fact, so star-driven is the film that we hardly hear the women talking amongst themselves. They are only, always reacting to Lakshmi’s pad mania. Apart from that, it seems, they have nothing to talk about. Not even Gayatri. They exist only as dakiya-noosi khayals he must fight and change.

Gayatri, in fact, is merely the receptacle of Lakshmi’s gyaan and sanitary pads in various stages of malfunction. Her character is defined only by his obsession, and she doesn’t really exist for those other 25 days of a month when she is not chumming. The film is all about him, but even his character is a strange concoction of Akshay the star and Akshay trying to portray a real character.

Many things are kind of touched upon, but they never come together to form a wholesome, believable character. We get glimpses of Lakshmi’s obsessive nature, how caring he is, but still he remains kind of undefined because his Lakshmi is partly powered by the Punjabi wit and warm sparkle of Akshay the star — like when he calls his mother “lalchi budhia” — and partly by trying to be a dedicated, devoted pad-creator.

Akshay is charming. It’s his jhallapan that makes him endearing. But the film doesn’t use that khul ke, neither does it let him get under the skin of the character with some measure of honesty. This aadha idhar, aadha udhar leaves his Lakshmi vague and us very dissatisfied. That’s because Balki is an inarticulate writer and director. Always has been.

Long, meaningful storytelling, where characters grow and come to life is not his thing. He sets up scenes well, his characters pose in them saying this and that, and they seem interesting. But they work only in short bursts. They don’t stay with you because they are never fully realised. Just like his plot. That too is driven by moments that can at best be described as desultory gibberish.

Like when Lakshmi jumps into Ganga and a panchayat is called. These moments throw the story forward, but they themselves remain fuzzy. And then there’s the nonsensical things Lakshmi mutters when he watches the stages of the pad machine that lead to his big moment.

There’s also, of course, the table playing fairy and the needless hint at a romance. Sonam Kapoor is lovely. But her character is like a big Bollywood satisfying burp in a film that was, before her arrival, feeling acute indigestion because of trying to play all real-real. These silly things together make Pad Man a rather stupid movie.

The time wasted on Pari could have been used to touch on many issues linked to periods — temple entry, for example. Or the buffet of used sanitary pads that Mr Muruganantham used to pour over in his backyard. The icky quotient of the spread may be high, but, hello, if we can take Akshay’s bloody crotch, surely it’s time we see a used sanitary napkin on the big screen.

A man is directing the film. So that’s too much to expect. But R. Balki was a sensitive soul, he should have paid attention to Pari when she says, “Auraton ko karen do auraton ka kaam”.

Or Twinkle Khanna, whose Muruganantham story inspired the film, should have immediately got the hint, dialled Gauri Shinde and handed the script to her. But, I guess, gifting women pads is how far their feminism goes.