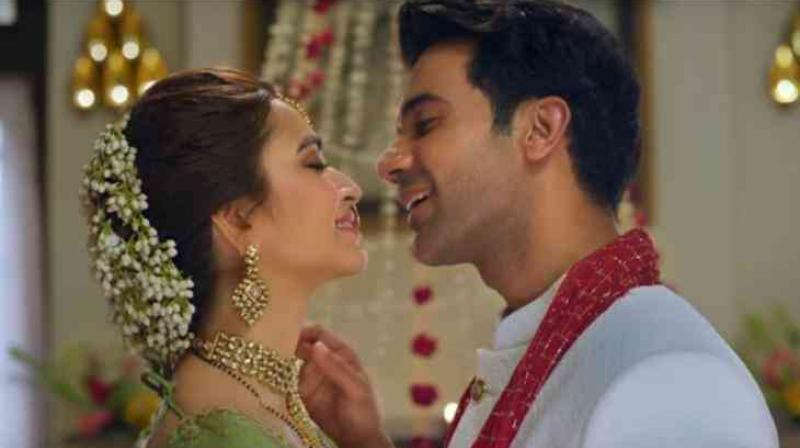 Director Anubhav Sinha's ex-wife Ratna Sinha has made her directorial debut with this film. However, the film picks up social issues especially prevalent in Uttar Pradesh but fails to impress the audience. Every love story is not a fairytale and this one too has a lot of melodrama which makes it more or less a typical television show.

Sattu (Rajkummar Rao), a government clerk, meets the girl of his parents' choice Aarti (Kriti Kharbanda), and falls for her but Aarti is ambitious and runs away on the D-Day when she comes to know that she has cleared her PCS examination and is soon going to be a government official.

Five years later, destiny turns tables for Aarti as she faces off with Sattu, who has now become an IAS officer. Will Sattu and Aarti finally marry?

First time director Ratna Sinha brings several social issues which are still relevant in the modern times but the narrative of the film is too flimsy. She tries hard to create tension around the interval time but it seems too tacky. Set in Uttar Pradesh, she has worked on the dialect and outfits of the characters quite well, although the second half is stretched like a chewing gum. It becomes difficult to sail through the climax especially when a film has a predictable ending. The film has a strong resemblance to Tanu Weds Manu, considering its backdrop and similar characters.

Rajkummar Rao is a master of his craft but of late he has become quite repetitive with his roles. Behen Hogi Teri, Bareily Ki Barfi and now this one, all seem alike. Though he is good enough in the film, he has nothing new to offer. Kriti Kharbanda looks cute and pretty as small town girl. Her dialect is commendable, but again the script is so clumsy that she seems to overact in few scenes. Rest of the star cast does a fair job.

Overall, Shaadi Main Zaroor Aana is strictly enjoyable only in parts. Don't expect it to be an interesting affair as it might give you a headache in the second half.