Watch 3 Storeys for an unconventional treatment and short length which is rare in Hindi movies. 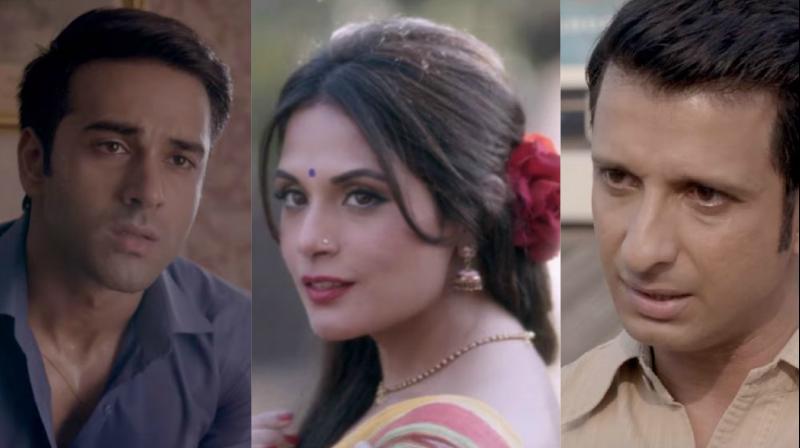 With predictable moments scattered all over the film, debutant director Arjun Mukherjee still takes a brave attempt of making an unconventional thriller. Although the twisted plot is easy to catch in bits and pieces, it is intriguing at the same time.

Leela (Richa Chadha) is a seductress who is everyone's desire in and out of the chawl where she resides, especially of the constable Ganpat (Himanshu). Flory Mendonca (Renuka Shahane) is an old Catholic lady who lives all by herself after the death of her only son and husband. Flory seeks a genuine buyer for her house as she plans to settle down in Goa with her sister.

Vilas Naik (Pulkit Samrat) runs a business in Hyderabad and in order to expand his business in Mumbai, buys Flory's house in the chawl. Varsha (Masumeh Makhija), a submissive wife, is a victim of her alcoholic husband every day, stays next door. Shankar (Sharman Joshi), a Dubai-based garment manufacturer retuns to his native house in the same chawl.

Suhail (Ankit Rathi), a Muslim guy is in love with Malini, a Hindu girl in the neighbourhood, but their families are against each other. How their lives cross paths with each other is what 3 Storeys all about.

Director Arjun Mukherjee makes his film a very easy-breezy watch, but it is layered and intensifying in the correct manner. He tells the stories of three different worlds, but leaves the mystery too easy to guess. However, the characters of his story are complex, dark, funny and emotional but look manufactured at times. There are certain moments in the film that will jolt you and few that are conveniently crafted. Apart from the characters, the good part of the film is its length. Arjun creates an entirely different world in just 99 minutes. Overall, he does a fair job!

Renuka Shahane is flawless. Her laughter, wit, pain and emotions are perfect. Pulkit Samrat is too good in his brief role. Richa Chadha looks apt as the sultry siren. Himanshu is okay. Masumeh had a dismal run at the box office earlier, but she bounces back with this film and shocks with her performance. You could feel her pain of being in an abusive relationship. Sharman Joshi is a great actor and in this one too he impresses with his act. Debutante Ankit Rathi does a fair job for his first film.

Watch 3 Storeys for an unconventional treatment and short length which is rare in Hindi movies.