First-time director Shreyas Talpade handles the issue of vasectomy in a subtle yet humorous manner. 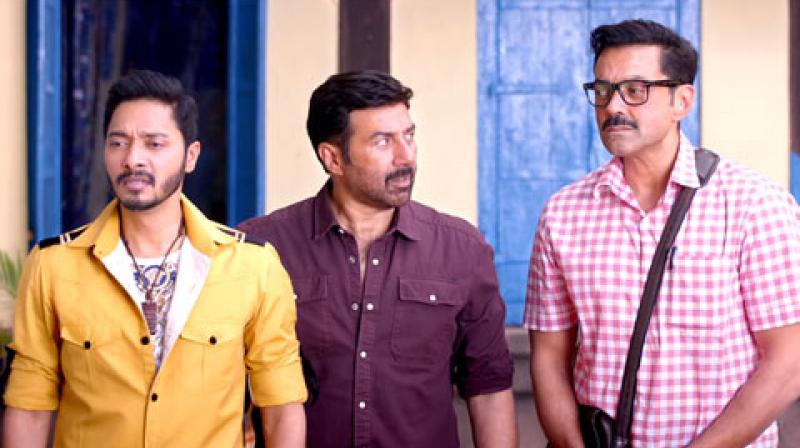 Earlier produced in Marathi, Poster Boys was the talk of the town in 2014. Three years later, producer-turned-debut director Shreyas Talpade brings you this laugh riot under the same title along with Sunny Deol and Bobby Deol in it. The film is thrice the fun with their rib-tickling comic timing but is highly preachy considering the current trend of Bollywood.

Jagaavar Chaudhary (Sunny Deol) and his wife Sonali Kulkarni live in a small village. Jagaavar is all set for his younger sister's wedding with her love interest. Vinay Sharma (Bobby Deol), a shy school teacher leads a middle class life with his wife and two daughters. Arjun Singh (Shreyas Talpade) is in love with his  girlfriend Ria, but her family isn't favour of their relationship. Lives of these three men come fall in major trouble when they mysteriously appear on a poster promoting vasectomy. How these men fight against the system to prove their innocence forms the rest of the film.

First-time director Shreyas Talpade handles such a preachy issue in a subtle yet humorous manner. The comic punches of the film are too good. Few moments in the film such as using Sunny Deol's popular dialogues such as 'tareek pe tareek' and 'jab yeh dhai kilo ka hath padhta hai to aadmi uthta nahin, uth jata hai' to the context of the scenes are damn funny. The 'Soldier Soldier' ringtone of Bobby Deol adds a lot of fun element to the film. The dialogues, especially in the first half, are comical. However, the film is way too low on production cost and primarily meant for small town audiences and not for the multiplexes.

The first half of the film is crisp and interesting, but the second half, where the three men set out to fight against the government, is too dramatic. With the help of the media, they unnecessarily sensationalise the issue which is away from the reality. It is indigestible to see a CM of a state take relevant actions within few seconds of the press conference. The makers smartly placed the film among the audience as a comedy film and not a film with a social message like recently Toilet: Ek Prem Katha was.

A film changes a lot if it is remade in other languages. It becomes questionable to make a film below the sensitibilities of a certain set of audiences. Although, Poster Boys in Marathi was a blockbuster, the Hindi version is enjoyable in bits and pieces.

Poster Boys is the fifth film of Sunny Deol and Bobby Deol together. Sunny is good enough to watch in his role. Shreyas is a comedy expert and does his role with conviction. The one who stands out is Bobby Deol. His transformation from a stylish gentleman in his previous flicks to a shy Hindi teacher with a moustache in this one is too good. His dialogues and punches in pure Hindi will make you laugh out loud. Sonali Kulkarni is average and has nothing much to do.

Poster Boys can be watched to lighten your mood this weekend but be ready for a social awakening in the end.