Kolaigaran movie review: A back-and-forth film that keep you vigilant

Kolaigaran is a murder mystery that wastes no time in getting into the story. 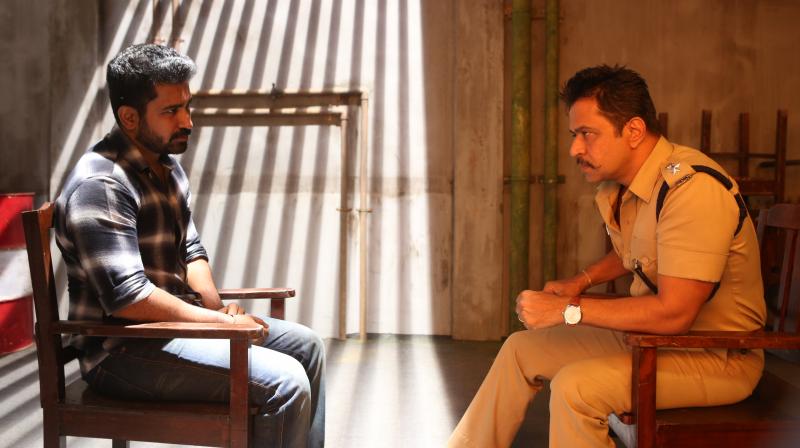 Kolaigaran is a murder mystery that wastes no time in getting into the story. The film starts in black and white with a homicide where a woman’s throat is slit open after which a man comes forward to confess his crime. This guy is Prabhakaran (Vijay Antony,) and his backstory is revealed a bit later. Now going back a few days, we witness the murder scene of an unidentified male. ACP Karthikeyan (Arjun,) who is in charge of the investigation finds out that the victim is Vamsi and he is the younger brother of an Andhra minister. The due procedure also uncovers that Vamsi had been stalking a certain Dharini (Ashima Narwal) and her mom (Seetha) who has now shifted to Chennai, and naturally the cop is suspicious of the duo as they would have likely carried out the murder. Now enters Prabhakaran and he claims responsibility for this. Karthikeyan also comes to know that Prabhakaran is a former IPS officer from Hyderabad and is famous for cracking murder cases. What’s the truth here? And how does Karthikeyan unravel the reminder of the plot? The answers to these questions form the basis of Kolaigaran’s thrill and suspense.

Directed by Andrew Louis, the movie is a cover-up story that pitches how a smart scheme can baffle law enforcement. Comparisons to Malayalam thriller Drishyam is inevitable as both films are based on the Japanese novel, 'The Devotion of Suspect X'.  The first half is a maze, yet Andrew’s grip over the medium is visible as he gets it together in the second half. Vijay Antony has been picking diverse characters and his role here highlights his strengths. Likewise, Arjun Sarja has done a great job as the lead investigator.

The director has given enough screen time for the main characters so as to keep us invested in the film. Perhaps Vijay Antony cop avatar could have received further development as his character was so arresting. Ashima Narwal looks pretty and has given an appealing performance. Nasser proves his versatility with his casual yet realistic act.  A couple of songs though pleasant were unnecessary, while the brilliant backgrounds by Simon King put you in the right mood. Mukesh’s cinematography is yet another high point. Overall, Kolaigaran is a back-and-forth film that is guaranteed to keep you vigilant. It is worth your time and money.