Mukti Bhavan, based on Benaras’ last-mile hostels/ashrams, is a meditative pageant that’s touchingly real and comical. 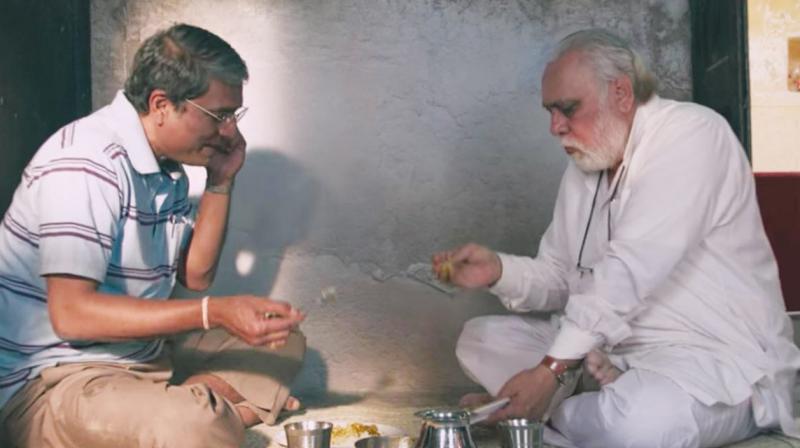 A still from the movie Mukti Bhawan
Rating:

Dayanand Prasad has been having a recurring dream which plays on his mind throughout the day.

In the dream he is back in his village, watching himself as a child, playing and then running home when he hears his mother call, “Daya”.

Daya, 77, thinks it’s sign, a message that he is nearing his end and must now embark on his last journey.

Am ready to die, he tells his son Rajiv (Adil Hussain), bahu Lata (Geetanjali Kulkarni), and granddaughter Sunita (Palomi Ghosh) sitting around the dinner table. But not here, he says.

“I will go to Benaras to die.”

When Rajiv first dismisses the idea as an annoying joke and then tries to dissuade him, Daya responds with the resentment most aging parents harbour and mumble more than once a day — about their grown children always being on the phone, with no time to spare for them.

Rajiv responds with irritated resignation, says of course he will accompany his father to Benaras.

The inaugural ceremony of Daya’s last journey is gau daan, a scene that’s lip-smackingly delicious because of the strange times we live in.

The singular reaction of the star of the ceremony, a Bambi-eyed, dazed, scrawny calf, is to pee upon being donated.

In Mukti Bhawan (Hotel Salvation), written and directed by Shubhashish Bhutiani, there is no grand ceremony around the gau daan, the calf doesn’t do anything cute, neither does it pick a special moment to piss on the proceedings. It just pees, which Sunita notices and giggles at, while the rest don’t even.

Mukti Bhavan’s brilliance lies in showing how absurd and full of meaning the mundane is, without intruding upon reality to give it either a grand start or a smooth finish.

It leaves scenes beautifully jagged, allowing each comment, irritation, action to add a gentle crease to the characters, story.

A shared cab takes Rajiv and Daya to Mukti Bhavan in Benaras where they meet Mishraji (played with exceptional honesty and precision by Anil K. Rastogi). Manager, resident philosopher and guide, Mishraji reads out the rules.

A vacancy has just been created and the room can be given for 15 days, no more. In 15 days, you either go uppar or return home.

But as Mishraji says, death is a prakriya, a process. And no deadline is given. So people sometimes linger.

Vimla (Navnindra Behl), for example, has been there for 18 years, since Vermaji passed away, waiting in her pink room full of food and steel boxes and bags hanging from the ceiling, safe from the pesky mice.

Rajiv and Daya move into the room allotted to them — a dingy, basic, stained transit lounge where the attendance of its past occupants is etched on a wall.

Daya finds everything appealing and quickly establishes a new rhythm of daily life, one that’s guided only by the needs of his body and desires of his heart, filling some odd nooks of time with satsang, obituary reading sessions with co-passengers and Udan Khatola TV show in the evening.

At times it seems like he’s been let out of a cage, allowed to settle down in a new place where he can breathe freely.

But then, when he is being a bossy, moody parent, obstinate about his daily routines, and adding new demands to it, like switching to the sadhu diet of milk and fruit, it feels like he’s checked into a soul spa, with Rajiv as his personal attendant.

These are moments when Lata’s question about when he’s going to go doesn’t seem absurd.

While Dadaji and Sunita share the most adorable bond, Daya’s relationship with his son is awkward, distant.

For Rajiv, it’s all a strange nuisance, a disruption of lives all around.

There’s a screaming boss on the phone, and there’s a client who has withdrawn his business.

There’s also, on the other end of a slow, stuttering Skype call, Sunita telling him that she doesn’t want to marry, and will pay for the cards that have been printed.

But over time, while participating in chores, in reactions to the meals cooked by Rajiv, father and son pick up where they left off. They talk to each other, express.

This father’s last journey with his son, while staring at the inevitable from the ghats of Benaras, is immersive, moving.

The endgame, as it is played out in Mukti Bhavan, is a dance of opposites.

Daya does morning pranayaam by the banks of the Ganga, in the midst of chants of “Ram Naam Satya Hai”.

And when he gets fever, he says it’s the end and asks for Gangajal. A satsang is organised in honour of his impending passing.

Lying on the bed, he gestures to Vimla to tell the singer, “Sur mein gaiye.”

The absurdity of desire and yet the need for it till the end is beautiful.

Mukti Bhavan, based on Benaras’ last-mile hostels/ashrams, is a meditative pageant that’s touchingly real and comical. It has exceptional performances, especially by Adil Hussain, Lalit Behl and Anil K. Rastogi.

But it’s Bhutiani’s screenplay, and dialogue by Asad Hussain, that add humour to this dark journey and make it crackle.

To which Mishraji, after muttering something about aatma and such, says, “Aap paan khaya keejiye.”

Weaving in this typically Indian absurdity, that we all get and perpetuate, to a rather banal moment is what makes Mukti Bhavan a must watch.