This is a classical approach that many directors have used in various ways. 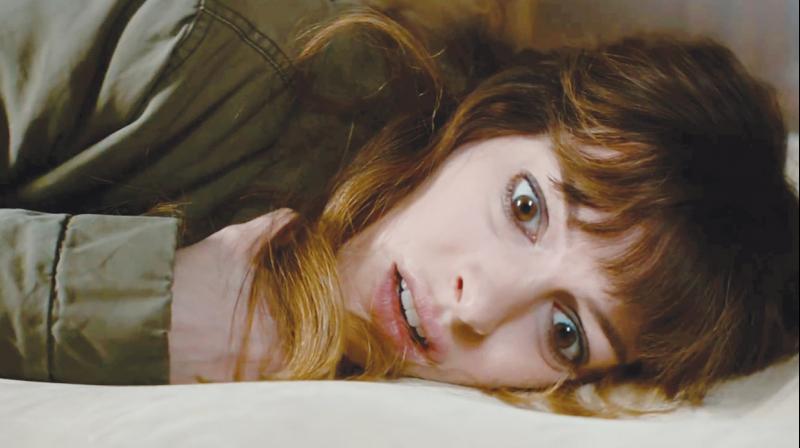 A still from the movie Colossal
Rating:

First, Colossal is not a monster movie and it is this surface level engagement with a film that really isn’t healthy for a modern society and second, if Anne Hathaway and Dan Stevens are in a movie with a budget of $15 million, please do not call it an indie movie. Sure Colossal has a confusing plot and as an audience you are left searching for logic in this strangely discomforting narrative. A relationship that seems unusually out of place, a friend who seems too creepy and a girl who constantly scratches her head, prompting you to also scratch yours by the time it gets over.

Jason Sudeikis is wonderful, his character, Oscar, bordering on delusional and insane is very lifelike, and exactly how the people who are failing at love seem to behave. The last ditched efforts to hold someone back, with threats of destroying something that maybe of value but not personal. The childlike pleading to get your favourite toy or you would start breaking the older ones, rolling on the floor and crying. There is a lot of honesty in what Oscar wants and can do to get it. You have to see it from a child’s perspective.

Gloria and Oscar, share a childhood bond and we all know how special it is and all the more important if you haven’t really grown up. You are in your late 20s and you still play in children’s park, imitating monsters and making it about more than just yourself. The pretensions become too real and you start feeling pain from what happens in the imaginary universe too, all of this is good storytelling.

Oscar’s breakdown happens at the bar when he lights up a cracker when Tim, played by Dan Stevens, is trying to talk to him about Gloria’s job. Gloria is a waitress at Oscar’s bar and he does not want to let her go. Oscar has also been trying to please her by bringing her a TV, sofa, furniture, etc., perhaps if she felt more comfortable and indulged she would not leave. But the trouble starts when one of the two delusional, drunk friends start to gain some sense.

There is also a little bit of envy when your childhood friend moves out and is actually doing something with their life while you are still stuck at the same place, not likely moving anytime soon. The general behaviour in such a case is to try and sabotage your friend’s life and that is exactly what Oscar is doing; not being mature in any sense. The trouble with a story like this is to make things visible, since everything is below the surface. Therefore, there’s a need for monsters and a weird connection to them. While you may also enjoy it at its face value you still have an open field to dig deeper and look for these meanings. This is a classical approach that many directors have used in various ways. This could actually be your initiation into the avant-garde cinema if you choose it to be.

Kudos to Nacho Vigalondo, the Spanish director, who ventured into this genre defying work and made it through, as we all know it is difficult to convince people to work in a film like this, let alone managing to get funded and release globally. There was some controversy too when the Japanese company Toho brought a lawsuit against the film’s initial imagery, but thankfully it all worked out in the end.

Colossal is also interesting for fans of butterfly effect or the chaos theory, giving them a very visual validation of what it could manifest itself as. The place where the film seems to become weak is where the director had to show the connection being established, during the childhood of Gloria and Oscar, a thunder bolt strikes both of them, perhaps this was a last ditched effort to make the film more convenient to watch.