Director R Balki makes a brave attempt with the film that talks about personal hygiene of women especially in villages. 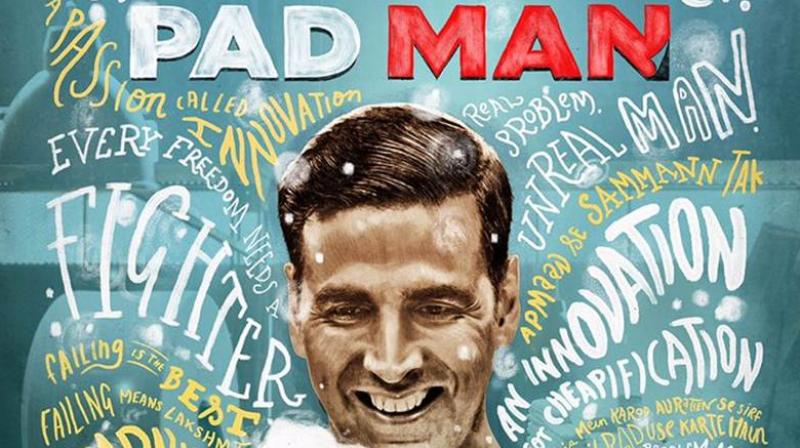 Amidst several taboos in the society, menstrual cycle of women being the most unfortunate one, director R Balki makes a brave attempt with the film that talks about personal hygiene of women especially in villages.

Laxmi (Akshay Kumar) marries Gayatri (Radhika Apte) and tries to make sanitary pads for her once he discovers her menstruation. Meanwhile, he starts distributing sanitary pads among the women in his village but faces rejection from everyone. He becomes the matter of concern for his ageing mother, two young sisters and wife too.

His life changes upside down when he innovates a machine to manufacture sanitary pads. Incidentally, he meets Pari (Sonam Kapoor), an aspiring MBA student from Delhi who decides to help him. What happens next forms the rest of the plot.

With many films on social messages these days, PadMan stands out for its unique subject and story telling. However, the film is too preachy especially in the first half. Unlike R Balki's narrative of his previous films, the conflict enters quite early and high point at the interval in this one. The screenplay of the film is problematic as it is similar to Akshay Kumar's last release Toilet Ek Prem Katha that talked about the issue of open defication.

PadMan being a love story primarily, Balki cleverly makes his point loud and clear. In fact, first half is sloppy and the film picks up in the second half with a praise worthy climax.

Directed by debutant Abhishek Saxena, Phullu had been ridden by controversies for having a plot similar to PadMan which was under production back then. It is sad how a small film like Phullu is a victim of lobbying. Even the Censor Board gave an A-certificate to the film which is absolutely an injustice to the film like this. How can personal hygiene and menstrual cycle of women be an adult content? The news was doing the rounds that the PadMan team has suppressed the promotions of Phullu but every film has its own fate. Just because a film doesn’t have a bigger star and a fancy production value, a film which is trying to spread social awareness cannot go unnoticed.

However, it won't be wrong to say that a social thought if presented with the bunch of popular faces and packaged well, the film reaches far more than a small but honest film like Phullu based on the similar subject.

Over to the actors now, Akshay Kumar is convincing in his act that not even a second you will feel disconnected to his pain. But still his emotions and variations as an actor is quite similar to those of Jolly LLB 2 and Toilet. Radhika Apte is raw, real and true to life. Sonam Kapoor is just about average as she is strictly a one tone actress. Cameo of Amitabh Bachchan is refreshing but mandatory, courtesy Balki.

Overall, PadMan is watchable for its exceptional subject. Don’t expect it to be a fancy commercial film but is definitely high on emotions.