But towards that end, it's is an excellent start 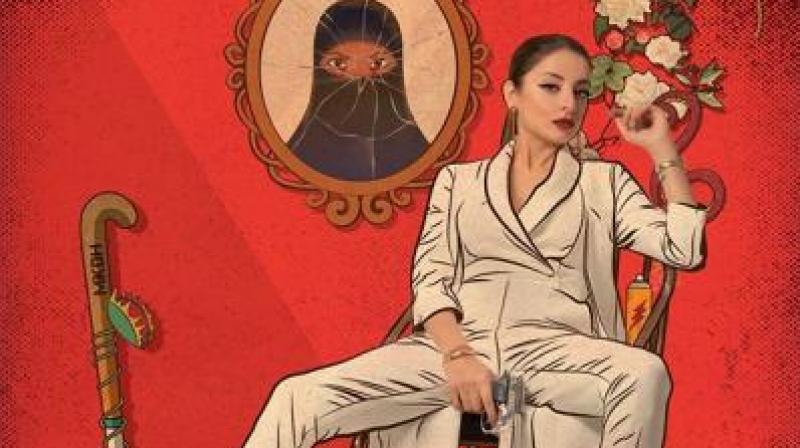 Churails is a Pakistani series streaming on Zee5.
Rating:

“Look Darling, Mazloom auratein are like diamonds — Forever. We will get to them.”

Jugnu (Yasra Rizvi), in her designer-wear and stilettos, is delicately lolling on the top of a table in what is her workplace.

She’s smoking. Or, perhaps, not right then.

She is drinking for sure, or has just had a swig. Whatever.

Jugnu, posh, single and now a former wedding planner, doesn’t simply utter these words. She exhumes this belief from her gut — a belief marinated in a clear-eyed, pragmatic view of the world. The words emanate from her gut with fumes of bored exasperation at those who don’t seem to get it.

This nonchalance is part of Jugnu's privilege, of course, which she embraces, but it also speaks of her sharp understanding of what makes the world go round: It’s money, bitches.

These trenchant lines also summarize and convey Churails' politics, its chutzpah and, of course, its motto: Churails will deal with heavy subjects, but since its threshold for chest-beating and boredom is low, it'll entertain, seduce and let women -- in the show and out of it, in burqas and without -- fantasize for a bit.

Churails, a 10-part series set in Karachi, opens with a cryptic interrogation scene inspired by Big Little Lies. We see some women, hear a cop asking questions, but we don’t see who he is, don't know who they are, what has happened.

Questions or their answers cut to flashbacks, to the lives these women lived, the world they came from, what they got up to.

Jamil seems like a catch because he doesn’t mind interviewing gardeners Sara has shortlisted.

She’s lost in her world, busy managing it, being the perfect mother and wife.

But something is missing.

That’s why, perhaps, when Sara is hyperventilating because a child in her son’s school told him that “noni” is actually called penis, and the school principal suggests that she take up knitting to calm her nerves, she loses it.

And then one night, a phone buzzes…

College-going Zubaida (Mehar Bano) is fed-up with her baba ka joota, ammi ki khamoshi and the blackmailing ways of her fat chaperon.

She takes out her rage by boxing and checking out gents log ke pecs on her phone. Especially the pecs and poses of Shams (Kashif Hussain). Her parents have a plan to fix her wayward ways. Or so they think.

Batool (Nimra Bucha) the killer arrives encased in a thick, transparent membrane that ensures  impenetrable solitude. She seems to be still even when she is moving. And when she talks, there’s more silence. Whenever Batool chews a paan, we feel the cogs in her head moving and sit up, expecting the unexpected.

All these women carry some typically feminine hurt. All except Jugnu. She is a victim of her own comfortable cowardice and choices. She stomped her way into witchdom long ago, and is still swaying with a glass in hand as she curses a Hydrangea tragedy that let "Karachi ke homos” take over her business. She says she wants to "die in Dior" but hides more than a hip flask in her designer bags.

Churails, written and directed by Asim Abbasi, tells the story of four mazloom women who come together to create a secret crime-fighting enterprise in the basement of a burqa boutique. Halal Designs, which cradles in its bowels their rage, desires, powers their mission and enterprise: They call it, Mard Ko Dard Hoga.

Candidates are interviewed and seven are hired -- six women, one trans woman. Some criminal, some skilled, all piqued.

The glue that binds them is naari shoshan of various hues, but the immediate trigger is infidelity. Cheating men is their forte and main target, sometimes at the cost of others.

There's energy in their secret operations. They like spying on cheating miyaans on behalf of paying wives -- some of whom seek more control, some just want peace of mind, some desire a bigger piece of the alimony pie.

All goes well till it doesn’t.

The twist in the show comes at a predictable moment, in a predictable way. But that's not what I am referring to here. I am talking about two cases, two moral dilemmas, and how the righteous falter.

Churails, which creates a kind of utopia where heterosexual men and women, lesbians, trans women exist happily, is fun and fearless in many aspects. It breaks several taboos and is quite brazen about doing so. It’s also not afraid to show its own characters as flawed and politically incorrect.

But, when faced with a dilemma, when it has to choose between its investment in the monoculture of mazloom auratein and those who may be worse off, it doesn’t see the other. And herein lies a glimpse of Churails' small-minded politics, and the show’s plotting weakness.

In both the incidents the story is a bit vague, inarticulate. And the one that bothered me a great deal can be described as marital infidelity versus love that’s forbidden in a society which celebrates heterosexual virility and punishes gay love with a 10-year jail sentence.

It involves ritualistic killing that's planned and executed with skill, spices and a seductive score. It's also shot gleefully, as if desperate to distract us from what's really going on.

I felt irritated, cheated because a fabulous opportunity to foreground forbidden love and a trans character had been squandered rather blithely.

Churails' characters and plot throw up some interesting moral whirlpools that challenge the myopia of straight, heterosexual feminism. But like a loyal, almost sycophantic supporter, it can't, or won't, see the other.

Women and their marital concerns remain paramount. Their hurt, instead of creating empathy for the other, sometimes gets weaponised to hurt another.

For a series that calls itself feminist, Churails has a very narrow, insular view of feminism.

Churails eventually winds its way to become a suspenseful thriller in search of two missing girls, slowly unmasking a strange sexual-fantasy club of abuse and misogyny, like those Nordic crime dramas.

While clues are dropped and it becomes obvious who, what, why… women get reduced to bit players in the story, rather than being the story themselves.

Churails’ plot is straightforward, but splicing the narrative with interrogation scenes creates intrigue. It also introduces to us one of the finest male actors I have seen on television -- Inspector Jamshed played by Fawad Khan, the other. His grimy cop with a pink, pocket-sized, hand-held fan who nurses a massive crush on a former inmate reminded me a lot of Jaideep Ahlawat’s Hathiram Chaudhary in Paatal Lok.

Churails tackles a lot — sexual abuse, marital rape, class divide, racism, prostitution, domestic abuse, the subcontinent’s obsession with all that is angrezi and gora, forced marriages, laws written and implemented by men, how we bring up our boys, how we teach them to see and treat women, the irksome existence of an akeli aurat... And it does so while drawing a lot from its many illustrious, Pakistani predecessors.

Marvel’s New Jersey-based Kamala Khan, or Ms Marvel, of course, who made her solo debut in 2014, as well as Pakistan Girl in long green boots whose dupatta is her fluttering cape as she fights corruption and domestic abuse. There was also Burka Avenger, the lead character in an animated TV series who fights the corrupt politician “Vadero Pajero”.

What's its own is Churails' moxie.

Witches rhymes with bitches, and Asim Abbasi doesn't just give each of his female characters some scars and a sharp bite, but also oodles of badass chudail swag.

His churails take charge of their desires -- to be with someone, or to leave them. They abuse, drink, smoke, make out. There's gay, lesbian love, and modest skin-to-skin touching — male to male, female to female and female to male.

In its first half, Churails has a spring in its step and moves like a delighted caper, loving its own chic insolence. There’s liberating coolness to its crudeness. Foul-mouthed women and their gaalis linger on, like designer perfume. But there's also a disturbing superficiality to its daring-do. A large part of that is a result of the show pretending that it's equally about four women even as it's constantly fawning over two upper class women.

Class keeps raising its ugly head in Churails. While it shows us how power remains concentrated in a certain class and its own unease with class divide is at times apparent, but so is its acceptance of it.

Churails seems to shrug and say, "Darling, all this class-vlass is just terrible, but it is what it is."

Churails keeps presenting the rather elitist, entitled behaviour of its two main characters -- Sara and Jugnu -- as cutely silly, without ever really interrogating them.

In fact, Churails hardly ever holds anyone to account. Not even the men, despite its abiding obsession with infidelity. And definitely never the system.

Not in the show at least.

Churails is split in episodic chapters and each one opens with an artistic, angsty, feminist essay — a commentary through a composition of visuals, some abstract, some obvious, some bathed in vaginal blood.

The one I liked a lot is about the gaze.

A dance director is recording an item number but one girl’s navel is not showing.

He shouts at the stylist who arrives to pull down the girl's jeans a bit. Item resumes.

But then the camera cuts to a row of bare-chested men. We don’t see their faces or legs. Just their oblong, hairy, sagging stomachs, with dark, oblong holes in them.

This juxtaposition of images articulates the violence and unfairness of this one craving that one. But more importantly, it creates an accompaniment to the smooth, almost concave female midriff — next time you see it, a hairy, male one will pop up in your head, chipping away at the male gaze's intent to titillate.

Wedged in between luscious houses, gorgeous clothes, gandi gaalis is the detailing of the lives of the show's main characters and their desperation. Even others, who are not lit by back stories, seem to come from a recognisable, believable world they want to escape.

Churails likes Jugnu and Sara the most, and both these characters are entrusted to fine actors, though if I had to pick my favourites, I’d go with Yasra Rizvi and Nimra Bucha.

Sarwat Gilani and her Sara is the pivot on which Churails spins. But she’s too goody-goody, perfect, dull for me -- the actor and the character.

I prefer Yasra Rizvi, Nimra Bucha -- women with uniquely angular personalities, flawed beauty. They are insanely compelling, because they look like life tried its best to leave some marks on them, and they let those show.

The world is changing and it needs a new vocabulary. Cocky, ballsy, eight-inch, 56-inch won’t do.

We urgently need words that can at least begin to describe women and their battles, their suffering and grit, words that can convey both -- the "span of her hips and the stride of her step", words that don’t draw their power from the male anatomy or try to masculinise female courage.

We need words that are born from the lived reality of women, words that don't try to hide the "curl of her lips", but also convey the "fire in their eyes", words that are not shy of "the ride of her breasts", nor wary of "the bend in her head".

To that end, Churails is an excellent start.