Sivappu Manjal Pachai review: A family entertainer worth a watch

Family ties and relationships mixed with sentiments occupy the center stage of every film of Sasi and Sivappu Manjal Pachai is no different. 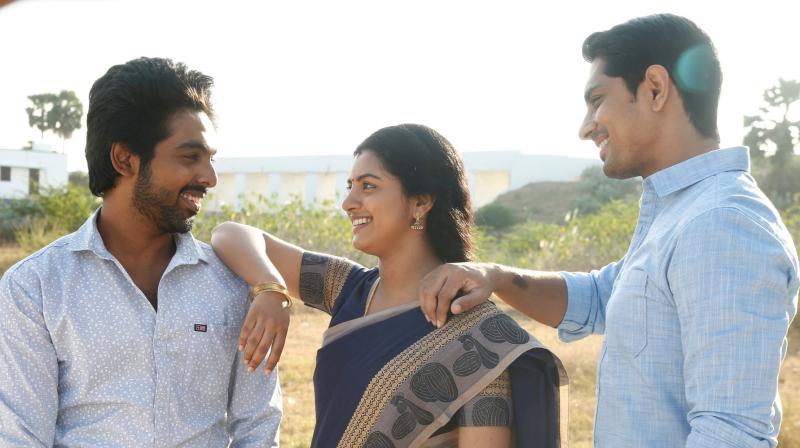 Family ties and relationships mixed with sentiments occupy the center stage of every film of Sasi and Sivappu Manjal Pachai is no different. It revolves around the brother-sister bonding and mama–machan sentiment.

The film begins with young Raji and Madhan in school. They grew up as orphans under the care their aunt. Raji’s teacher calls Madhan and enquires why he signed his sister’s progress report. He confronts the teacher saying, ‘we don’t have parents, and neither a guardian. I am her father and she is my mother.’ That summarizes the basic plot. Through a song they grow up as GV Prakash and Lijomol Jose. Madhan is an avid illegal bike racer, but Raji is dead against it.

Meanwhile, we get introduced to an upright traffic cop Rajashekar (Siddharth), who gave up a posting in Central Intelligence as he feels ‘society differentiates but that traffic lights (Sivappu, Manjal Pachai) don’t’. According to him they work irrespective of caste, creed, rich or poor without discrimination. One day, while on duty Rajasekhar nabs Madhan for rash illegal racing and humiliates him in public. He also captures it on mobile and uploads the video on YouTube. Madhan waits for a chance to take revenge on Rajashekar.

Fate has something else in store for them. And the twist comes when an alliance is fixed between Raji and Rajashekar. Now, Madhan disapproves the alliance and tells Raji that he would look around for a better bridegroom. However, turn of events lead to Raji marrying Rajashakar and now Madhan is in a fix. Raji is torn between her affectionate brother and endearing husband. And then there’s this drug mafia episode, and how this brings the warring duo together forms the rest, with the film ending in a clichéd climax.

A major success of the movie is Sasi’s well-etched characters and the perfect casting. He has extracted the best - be it from the actress who played the aunt or the young actors who essayed childhood GV and Lijomol, and the lead actors. Siddharth with his fit body plays his character of an astute cop effortlessly and he is equally impressive in emotional scenes. GV Prakash has given top-notch performance as a brash biker and a doting brother. Lijomol gets a meaty role san the antics that are normally associated with such characters and the pretty actress pulls it off gracefully. Sasi’s classy touches are sprinkled here and there. Like the one where Raji in an attempt to unite her husband and brother while drying their clothes drags the cop uniform and jersey and clips them together. There’s a strong message conveyed through Siddharth’s character (after he realizes it through his mom) that men always try to control women in one way or another in the pretext of ‘it is out of love’.

However, Sasi has resorted to commercial compromise especially in the second half and towards the climax. Also, bike-racing scenes are not thrilling and look rushed with CG works. Nevertheless, with several pluses, we can overlook the flaws. The film is worth a watch and is certain to lure family audiences.