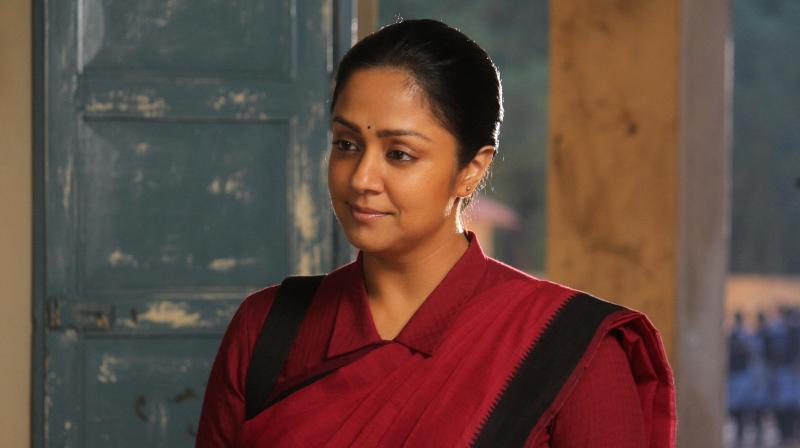 Set in a village A.Puthur, the film opens interestingly with a lady (Jyothika) alongside of a villager and her kid walking through a government school premises. The place is adrift with chaos: people dump garbage inside the school, boys jumping the wall, a set of students indulging in unruly behaviour, most of them in coloured attire, building in half dilapidated condition while teachers waste their time chitchatting in the staff room. Finally, when the lady says she needs admission for the kid, the rude assistant headmaster (Kavitha Bharathy) asks for money (bribe). There comes a twist. Yes, she is a Raatchasi for you – the tough taskmaster Geetha Rani who has been appointed as the new Headmistress, and she is on a mission. She is determined to revamp the system and bring about a change in government schools.

However, her strict actions, which bring a lot of fruitful results, did not go well with other teachers and her rivals. Ramalingam (Harish Peradi) is one such biggie in the area who runs a private school and he fears that the government school might turn competition to him. Along with the local MLA (Aruldas) and other resentful staff, he hatches a plan to get Geetha Rani out of the school and he finally succeeds in putting her behind bars. Who is Geeta Rani and what is her background, what crime did she commit, and whether she was able to reform the school (or not) makes up the remainder.

It is Jyotika all the way! With a total image makeover, she mouths powerful punch lines, gets super slow-mos, even bashes up half a dozen goons (when her background is established in flashback) akin to mass heroes. Jyothika has given earnest performance. However, she appears just conveying the dialogues rather than giving them real punches. There are cute moments like the class II student Kathir who secretly has a crush on Geetha Rani and expresses his romance to her in an endearing manner. There’s yet another worthy scene where Jyotika breaks the so-called customs at the cemetery when her father (Nagineedu) passes away. Poornima in an insignificant role has been wasted.

Debutant director Gowthmraj’s noble intention of taking a theme on education in the state (a topic that has been dealt with in films like Saattai and Pallikoodam) is appreciable. It also has powerful dialogues by Bharathy Thambi like ‘If you don’t stop an evil thing that is happening in front of your eyes, then you also become part of that evil thing. Those who combat it find a place in history.’ But the problem is that the screenplay lacks depth. And actually, there are not many serious conflicts to the protagonist and hence the messages appear a bit preachy.

Sean Rolden’s music and Gokul Binoy’s cinematography capture the right mood of the film. There are few glitches, nevertheless, Raatchasi is a well-intentioned film with a good concept that’s worth a watch.