Choreographer turned filmmaker Baba Bhaskar has said that he's taken a leaf out of his own life for the script. 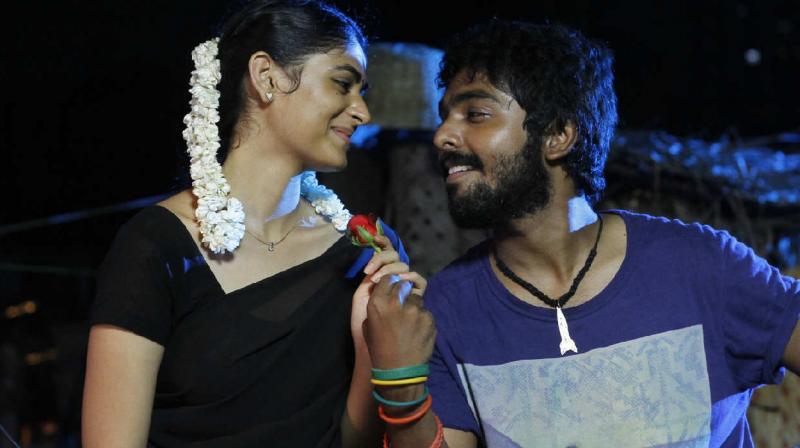 A still from Kupatthu Raja.
Rating:

Rocket (GV Prakash) is a wastrel and a perpetual drinker from a North Chennai slum whose only job is to roam around with his useless friends (including Yogi Babu) and indulges in silly scuffles. And the best part is that he often boozes along with his dad Oor Nyayam (MS Bhaskar), a rickshaw puller with a meagre income. He is at loggerheads with the local thug MG Rajhendran (Parthiban), an ardent fan of MGR and do-gooder in the area. Rocket is in love with Kamala (Palak Lalwani), a girl from the slum. All the same he is lusting on Mary (Poonam Bajwa), his new neighbour. A small boy goes missing and soon Rocket’s father is brutally murdered. Rocket suspects everyone like Rajhendran, the local councillor with whom he had a brawl earlier etc., but a twist in the tale comes from unexpected quarters.

Choreographer turned filmmaker Baba Bhaskar has said that he has taken a leaf out of his own life for the script as he belonged to North Chennai. The way he has portrayed the community where men always drinks and mouth filthy lines, kids are over matured for their age and act like adults, and a guy who is the supervisor who makes sexist remarks on women workers and assaults them, one wonders if slums of North Chennai really looks like this.

Having accepted the role, GV Prakash has nailed it be it his North Chennai diction or his dance moves. Parthiban does a decent job and MS Bhaskar, as usual, proves his versatility. Palak Lalwani is loud and her lip sync goes for a toss. Poor Poonam Bajwa- as 'Biscouth Aunty', she has been relegated only to skin show. Yogi Babu does manage to evoke laughter occasionally. The songs by GV Prakash are speed breakers, but BGM goes well with the theme of the film.