Sriram Raghavan has set his focus on making the usually serious murder mystery a gripping yet entertaining one. 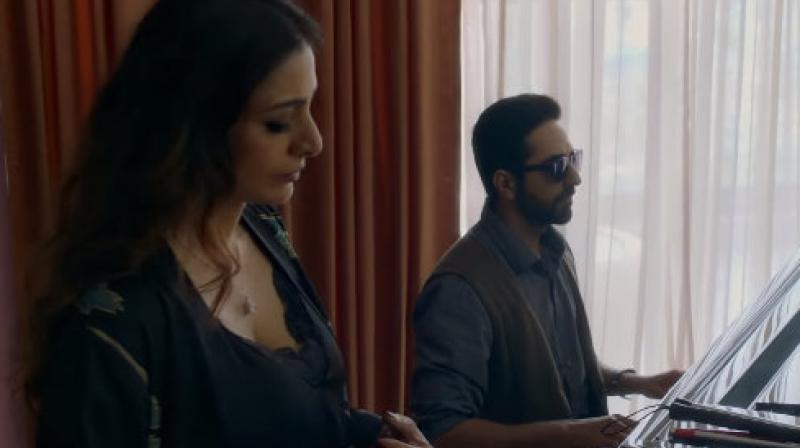 Sriram Raghavan, rightly like the dialogue, has set his focus on making the usually serious murder mystery a gripping yet entertaining one.

He has obviously stood up to expectations and from first frame to the last, every scene has a meaning and is related so as to go in a flow.

Ayushmann Khurrana and Tabu are the star of this movie, with Radhika Apte also giving a great performance in whatever little role she has.

The movie begins with a random story which involves neither of the characters, but we are introduced to Akash alias Ayushmann and how! This man has surpassed his own level with each film he has picked in the past, and he does the same with Andhadhun!

Soon after Tabu is introduced in the film and hereon begins the drama. This woman has so much drama to offer in Andhadhun but this drama neither looks fake nor forced. It comes so naturally that it makes you laugh!

And amidst that, her dialogue delivery in lines like 'Tum bass Singham bane ghoomte ho' or 'Spelling mat poochna, matlab chahiye toh bata sakti hoon'. This lady has so much to offer - from being seductive, she can turn deadly the very next moment.

But the film is about a murder, actually many murders having taken place. Who is the brains behind the murder or how can the murdered curb the effects of the murder, is the basic plot of the film, but Sriram truly has so much more to offer than just that!

Radhika appears in three crucial moments in the film - when Ayushmann is introduced, when things heat up between them, and when life takes them forward. She plays her role well but having missed seeing her in movies, we wanted her to bring something more to the table.

Sriram has done a fab job in keeping dark humour intact. There are so many quirky and surprise elements that will make you cover your face too. All of this happens in the first half. The intermission is at a point where you begin to think what next. And what happens next should not have taken place. There is drama, bits of thrill and a suspense waiting to be unveiled.

The movie is a tribute to many other iconic films and scenes, which Sriram has beautifully placed in the film. The background score of the film, including the piano tunes, keep you gripped to your seats. Just the thrill you experience with the character is enough to know that the movie is truly worth it.