Jab Harry Met Sejal is a happy, silly, goodlooking film with nice songs which begins on a stiff, stilted note. 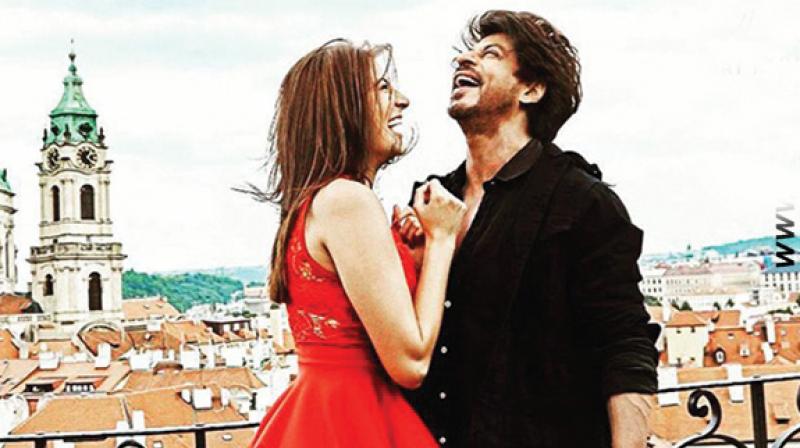 Imtiaz Ali, like my long deceased Dadi, tells the same story again and again.
Like her, he too throws a new tangent, adds a new character, a talisman, a tiny de tour to break the weary monotony. A boy and a girl meet. One is betrothed to someone, while the other is free but hurting and not looking for love. Either because of someone’s stupidity or necessity, they set off on a journey together…Socha Na Tha, Jab We Met, Rockstar, Highway, Tamasha… And that’s where it happens — ishq-walla love. The boy usually feels it first, and, slowly, so does she. But there’s a hitch. A minor bump in the road, really, that’s to be crossed at the end, after a few mandatory tense moments. It’s the same story here. Except that the differentiator in writer-director Imtiaz Ali’s Jab Harry Met Sejal s Shah Rukh Khan. SRK’s character here is not powered by dazzling writing or traits, like Kareena Kapoor’s delightful Geet was. Fresh, distinct, peculiar and adorable, Geet was written with care and in detail. That’s not the case with SRK’s Harry. JHMS is made compelling and memorable by that magic which makes SRK the boss of romance.

Shah Rukh Khan invests Jab Harry Met Sejal — a fairly enjoyable, fairly mediocre film — with a warm heart and an aching soul. He first creates a slow-burn love and then keeps increasing its intensity over the span of the film. That it happens with a girl so ordinary and annoying, makes you think you must have it too. Of course, the writing is done keeping that in mind. But, as you leave the hall, carrying this template of intense, passionate romance, the image of SRK, screaming or simmering, lingers. As does the feeling that what you have is not enough. That you need a Harry, too. Damn you, Shah Rukh Khan. We learn critical things about Harinder Singh Nehra (Shah Rukh Khan), a Canadian-Indian, in the first two-three minutes of the film. Harry is a tour guide in Europe who is good at his job. But he is also listless, lonely in these pretty but cold landscapes.

As he keeps returning to the same places, to say the same things, images of Punjabi khet, a Phulkari dupatta and his home flit about in his head.
Harry, the guide to exotic lands, is lost to himself. He’s just going through the motions of living. He’s just deposited a Gujarati group at the airport, mumbling good-riddance while smiling and waving goodbye, when Sejal (Anushka Sharma) accosts him. She’s supposed to be on the plane, but has had a fight with her fiancé, also on the tour with her, because she lost her engagement ring — his family heirloom. And now, she says, Harry must take her to the restaurant where she thinks she dropped it. It’s an annoying inconvenience for Harry, who drinks a lot, dates a lot and then dumps without the last courtesy call. So he insults her, tries to shake her off. She offers to pay. He rejects the offer. She says she will complain.

Harry’s already had trouble with female tourists and can’t afford to have another woman complaining. So he relents. But there’s no ring at the restaurant where the romantic engagement took place. So Sejal, an LLB who handles legal matters of her diamond merchant family back home, says she must return to all the places she visited, and that she will pay him. Harry explains himself to her — I am a ganda aadmi, a womaniser who has often been caught with lady clients doing gandi-gandi things. I am basically out of control around women, and you’ll fall for me, he says. But Sejal is adamant. She wants him to accompany her, and says she is not interested in him. I am in control, she says.   And so it begins, a reluctant guide and an annoying Gujju chick’s journey across Europe to retrieve a ring.

Since he’s irritated, Harry keeps throwing tantrums we approve of because, a) Sejal is an idiot who lost her engagement ring, and; b) A bigger idiot to now go looking for it. It’s a waste of time, and really flimsy premise to create a two-and-a-half hour film around. Yet, as they hop from Netherlands to Berlin, Dresden to Prague — since it all looks the same, we are informed about venue change by a map — Harry tells Sejal she’s cute and sweet, not sexy. He’s right, but she’s offended. The mandatory malevolent-goondas-after-heroine’s-izzat scene follows, and she is duly saved by him. But then they find themselves in the den of a Bengali don, Gas (Chandan Roy Sanyal). This is the film’s most bizarre scene that is somewhat redeemed by what Sejal discovers at Gas’ den. Over seven films, Imtiaz Ali has created an impressive oeuvre and his own world of cliches. He has a rather limited, puerile view of men, women and romance.

In his films, romance only happens on journeys. His heroines are always full of life and virginal, while his heroes are hurting, lonesome and in need of rescuing.
The girls, with their affecting innocence, make this corrupt, convoluted world a liveable place for the boys who had sort of checked out of life. The men are mostly silent types, the women chatter boxes wanting to add to the cacophony of life. Mostly, the girls are en route to getting married. So the penny first drops for him, and then her. It’s perhaps unfair to expect something new here since the title itself suggests that the film is going to be a bit of Jab We Met and When Harry Met Sally.   Thankfully, Ali creates an interesting power equation. But, he doesn’t do anything with it.

Harry is employed by Sejal and though she talks about money, we never see her pay the hero. That would be too much, I guess. Heroine paying the hero. He is after all a man, even if he needs rescuing. Like he did in Rockstar, Ali’s gone phoren here, and his film resembles, in looks, stride and sound, films of Karan Johar & Co. Jab Harry Met Sejal is a happy, silly, goodlooking film with nice songs which begins on a stiff, stilted note. But then it takes off, with Anushka’s animated hamming and SRK’s edgy, intense self breaking out and making routine scenes enjoyable. The film remains uneven throughout, rising when SRK increases the temperature, and dipping when he doesn’t. Though Anushka’s Gujju Sejal is made up of two-three speaking ticks, she invests the ordinary with intelligence, making it rather special and cool. But Jab Harry Met Sejal really works because of Shah Rukh Khan. It’s disgusting how much power SRK has over our imagination, scenarios of romance. And here he’s gone thoda-sa physical as well. SRK has mostly romanced women in exotic locales by singing songs or in brief, intense moments where he holds their face, bores his burning eyes into them and says his piece. But in a brief scene in Jab Harry Met Sejal sparks fly off the screen when, in his edgy, intense mode, he caresses a woman. I swooned, and I think a spark hit me in the eye.