102 Not Out movie review: Rishi is excellent, AB is hammy

Rishi Kapoor is excellent. He doesn’t upstage Bachchan. He didn’t need to. Gently chided it with his controlled, measured performance. 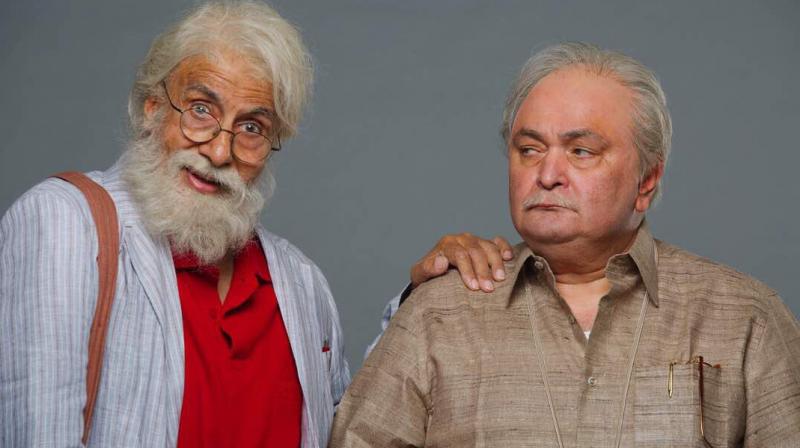 Director Umesh Shukla’s 102 Not Out, based on a Gujarati play by Saumya Joshi with the same title, has tried to add heft to its proceedings by casting Amitabh Bachchan and Rishi Kapoor in the two lead roles.

But, as is the case with most plays in India that aim to entertain the entire joint family while leaving each member teary-eyed and pondering over a vignette of familial gyan, both their characters are exaggerations.

Not a bad thing in itself, but if farfetched characters are played with unchecked, amplified boisterousness, the caricature leaves you feeling gypped.

The saving grace is that while one of the two biggies does that, the other keeps it all nicely in character, in control.

A sutradhar’s voice (Vijay Raaz) introduces to us the setting, main characters along with their key traits.

There’s a father, Dattatraya Vakharia (Amitabh Bachchan), who is 102 years old and yet takes rickety auto rides because he likes chatting with the autowala. His normal state of being is to smooch out every bit of fun from life every second of the day.

Inside his large Shanti Mansion in Vile Parle, Babulal Vakharia (Rishi Kapoor) drags his feet around, up and down in a depressing, robotic monotony to ensure the geyser is off, the water pump switched off.

Babulal is Dattatraya’s 75-year-old son who lives with a perpetual scowl at the stuff around him as well as inside his head.

Close at hand, always, is Dhiru (Jimit Trivedi), a sweet minion-cum-pal of Dattatraya. He is employed as a compounder at the local chemist shop but likes to hang around their house.

Dattatraya and Babulal operate like an aged couple trying to keep to their space to avoid conflict — so the junglee man-about-town has his own, separate refrigerator that’s stocked with happy pastries, while the sulky, sanki one makes daily visits to the doctor.

Packed in this too-cutesy-for-words scenario is a life lesson that Indian parents do not seem to want to learn: If your bachcha turns out to be nalayak, admit it, don’t cling to hope, move on without signing off your life and property to them.

So Dattatraya drags in a cut out and announces that he is going to beat the record of the Chinese man who lived till the age of 118. But for this he needs happy people around him, and so Babulal will have to go.

He threatens the unthinkable. And Babulal, too used to his sad routine and stuff, pleads. Dattatraya relents, but has many sharts — some of them rather silly and pointless and boring, some of them poignant and life-altering for Babulal.

It’s choo chweet a premise, and a purpose so senti — Dattatraya wants to inject life back into his son. He wants him to learn to live once again, and not to die before he dies.

102 Not Out assumes a flippant tone and style because it doesn’t want us to get all depressed and morose about children who grow up into selfish so-and-so, crappy human beings.

Problem is that while the plot is simple, the space in which it is played out is made up of silly, airy-fairy details.

The house terrace is like a little room in the sky full of lit candles, and on a little street corner people walk as if they are starring in their own slo-mo dance-dream sequence while being serenaded by a man playing the saxophone. Bizarre, much.

Also, the film doesn’t trust our intelligence. It thinks our collective IQ is in single digits and so, after playing out its funny scenario, a joke, it pauses to explain in detail the joke it has cracked.

But we go along since the long-limbed Bachchan Saab is the one guiding and goading action, with warmth, eyes that are deep wells of wisdom, and light, loose talk. Sadly, there’s much hamming to contend with.

AB is all over the place, flitting in and out of character, except when he’s not.

He creates his character from gestures and laugh so big and bold when a little less would have been stronger, more memorable.

Rishi Kapoor is excellent. As a crunched up, irritated man, he uses his body band silence to communicate a lot.

Kapoor doesn’t upstage Bachchan. He didn’t need to. Gently chided it with his controlled, measured performance.

AB, now 75 years of age, still has the power to give many of us goosebumps, bring tears to our eyes, or just rile us up about someone, something.

His power to connect is shockingly still as strong as it once was.

He throws in a few carefully calibrated power moments in between his over-the-top performance, fleeting moments that give us a glimpse of the actor he once was.

Of course a lot of this has to do with the fact that many of us grew up with him and our love affair, that has lasted 40 years, weathered that toofani decade of Ganga, Jamuna…, Jadugar, Ajooba..., is still going strong.

But these days, like a nervous salesman unsure of himself and his wares, AB tries to pander, to give us what he thinks we like.

In between hamming, he suddenly reaches out to us — to assure us that he’s still got it. None of these are really part of the characters he is playing. These are cheap tricks to connect, to send us off happy.

He keeps these small because we are well trained to read the smallest of his gestures — in his deadpan, droopy-eyed gaze we sense an exciting pause before a storm, the tightness of his jaw and slight stiffening of spine is a call for action... But we also sense an element of dishonesty to the character he is playing.

To reduce a performance to a few tricks is dishonourable for him and makes us shamefaced.

Still, most of us can’t reject him. Because for many of us that would mean rejecting our own past, our growing up, admitting that the fire in the belly we know we had at some point in time was never really there.

Many of us still carry, rolled under our armpit, an “AB the Greatest” jhanda. We are waiting for him to give us an occasion to whip it out and wave it again.

Mr Bachchan, give them a glimpse of that imposing imaarat where many of us still dwell, in hope.