The only thing I enjoyed more than the comedy in Thor: Ragnarok was a climactic battle sequence synced perfectly to Led Zeppelin’s Immigrant Song. 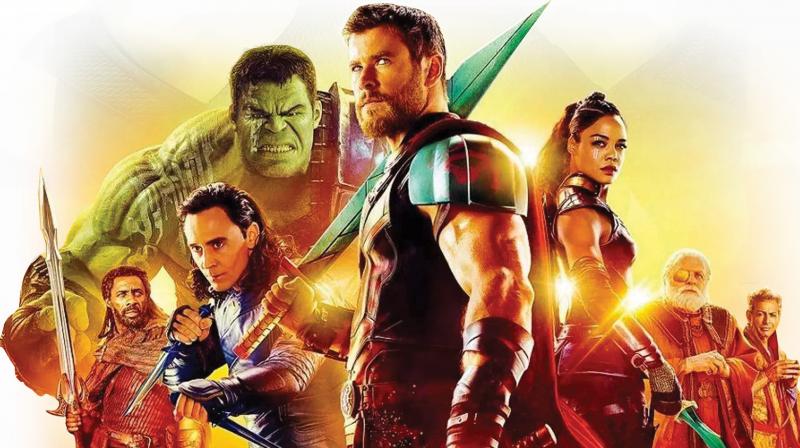 One of the many surprising delights in the bright and brassy and wonderfully funny Thor: Ragnarok is the recasting of the God of Thunder as a perpetual underdog.

Of course the Hulk (Mark Ruffalo), who becomes Thor’s buddy-movie sidekick this time around, dwarfs the muscle-laden pride of Asgard (Chris Hemsworth, terrific and self-deprecating).

Thor looks even tinier compared to Surtur’s menacing dragon creature. That beast could swallow our guy whole and not even burp.

Nor is Thor remotely close to being the baddest warrior in this movie. He’s at best an even match against the Hulk; he butts heads with a former Valkyrie (Tessa Thompson) who is at least his equal in hand-to-god combat, and he doesn’t stand a chance in a one-on-one face-off with his older sister, the evil and all-powerful Hela, aka the Goddess of Death (Cate Blanchett).

Oh, and Thor is also at the mercy of Jeff Goldblum’s Grandmaster, the ruthless and absolutely stark raving mad ruler of Sakaar, where the hedonism is fuelled by slave labour. Grandmaster is practically immortal. He’s like 14 billion years old. He treats Thor like a puppy dog.

There’s a lot going on in director Taika Waititi’s Thor: Ragnarok, and much of it is goofy and campy and marvelously self-referential. To be sure, Ragnarok has the big-budget, mega-battle, intergalactic heft of a Marvel superhero movie — but the casual, loose personality of the film is very Guardians of the Galaxy. (Surely no accident. After a number of small teases in previous films, the Guardians and Avengers will have their big crossover moment in 2018’s Avengers: Infinity War.)

Ragnarok begins with Thor saying goodbye to his father, Odin (Anthony Hopkins), shortly after reuniting with brother Loki (Tom Hiddleston), who isn’t dead after all because Tom Hiddleston is far too fantastic playing Loki for the Marvel movie universe to really and truly kill off Loki.

Loki and Thor have gone through more estrangements and reconciliations and betrayals and rinses and repeats than sibling characters on a 1980s daytime soap opera. Thor even points out the act is getting old, and he’s got to stop falling for Loki’s sincerity act only to get the rug pulled out from under him once again.

For a while the boys do team up — against their sister Hela, a vicious and casually murderous goddess who costumes it up like vintage Vegas Cher and speaks in grand tones, as if Will Shakespeare has written her lines.

As the boys soon learn, Hela is infinitely more powerful than the two of them combined. So while Hela returns to Asgard and begins to systematically slaughter any rebellious soldiers or civilians, Thor and Loki set out on a quest to...

Well, each has his own goals, and sometimes those goals put the brothers at odds again.

Cate Blanchett is as great as you’d expect her to be playing Hela, who is actually kind of sad and tragic. Yes, there’s the whole Goddess of Death thing, and that’s not nice, but Hela’s brothers didn’t even know of her existence until recently, and that really irks her, and she doesn’t have any real friends save for the giant zombie warrior dudes she recently resurrected from the grave, and even if she assumes her rightful place on the throne in Asgard, where’s the fun in that if everyone is dead or in chains?

At least Grandmaster loves his work. (And nobody does a better Jeff Goldblum impersonation than Jeff Goldblum. He’s flat-out hilarious as the crazed but always upbeat dictator.)

Screenwriters Craig Kyle, Christopher Yost and Eric Pearson and director Waititi also came up with a clever way to make the Hulk more interesting. For two years running, we learn, it’s been all Hulk, no Bruce Banner — but a slight trace of Banner’s wit and personality has managed to work its way into the Hulk’s DNA.

Tessa Thompson makes for a badass fallen Valkyrie, Idris Elba is perfectly cast as the selfless and fearless Heimdall, and Karl Urban has a couple of shining moments as Skurge, whose survival instincts clash with the instincts of his better self.

What an outstanding cast. They all came to play.

The only thing I enjoyed more than the comedy in Thor: Ragnarok was a climactic battle sequence synced perfectly to Led Zeppelin’s Immigrant Song.

The hammer of the gods
We’ll drive our ships to new lands
To fight the horde, and sing and cry
Valhalla, I am coming!