Ittefaq entrusts its cracking scenes and lines to an efficient ensemble of actors. All are very good, Sonakshi Sinha & Akshaye Khanna especially so. 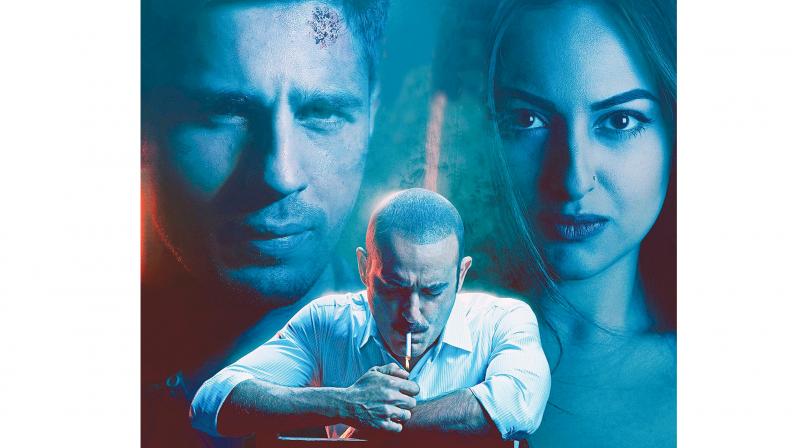 Still from the movie Ittefaq
Rating:

Whodunnits are cool, especially those that fry our brains, first by presenting a dead-end mystery that needs solving, and then showing us stuff we take as clues and go on our own sleuthing jaunts to solve the murder in our heads before the film can.

Memorable whodunnits are the ones that are smarter than us and in the last reel show us how silly, wrong or clueless we’ve been all along.

Bollywood doesn’t attempt these dimag-lagane-waali films too often. That’s mostly because there’s little money going for these plot-driven films as they are not great showcases for stars and, by extension, don’t keep the whole stardom vanity machine gainfully employed, relevant and in the news.

So when one comes along, requiring the backing of three producers and is worked on by three writers — Abhay Chopra, Shreyas Jain, Nikhil Mehrotra — it’s a moment.

Director Abhay Chopra’s Ittefaq is based on a family heirloom — the 1969 Ittefaq  starring Rajesh Khanna, Nanda and Iftekhar. Based on Hollywood’s Signpost to Murder (1964), it was directed by Abhay’s granduncle Yash Chopra and produced by dadaji B.R. Chopra.

The story of Abhay’s Ittefaq is similar, to the extent that there are two dead bodies and the needle of suspicion is initially on the man found on both crime scenes, then on a woman at one of the crime scenes, till it finally settles on one.

But his film is also different from its biological parents because here the drama of the murder mystery and suspects is brought alive not just by clever sleuthing and sharp interrogation, but also by what goes on beyond it — amongst the cops of Colaba police station.

It sees a benign, human side to them beyond their macho posturing and threats and has fun with it.

The setup is simple. In Mumbai, a man is driving a Mercedes rather rashly through late evening traffic. Two police vans — with hawaldar Tambe, and his Saab, Kadam — are chasing him rather slowly.

The Mercedes hits something, flies in the air, turns turtle and lands. A bloody hand appears in the window, opens the door and a man, Vikram Sethi (Sidharth Sethi), UK-based celebrity author, in Mumbai for the launch of his latest book along with his publisher wife, Catherine (Kimberley Louisa McBeath), gets out and, dodging cops, takes refuge in a house — to phone a friend, perhaps, or call a lawyer.

The house belongs to Maya (Sonakshi Sinha) whose husband Sidharth, a lawyer, is away.

It soon transpires that Vikram has been running away from one murder scene, and is soon caught at another… this time at Maya’s.

Ittefaq, coincidence or a well-thought out murder plan?

Dev (Akshaye Khanna), whose dimag is computer se bhi zyada tez, is woken up and put in charge of solving what’s now a double-murder case with a high-profile suspect. With the assistance of inspector Gautam and Tambe, he has just three days to crack it.

A murder weapon is found, burnt photos recovered from the dustbin outside Maya’s house, but as Dev begins talking to Vikram and Maya, we see what transpired in the posh house from two perspectives — Vikram’s story points the finger at Maya, while Maya’s story pins the murder on him.

As we, along with Dev, ponder facts and motive — Vikram seems to have no motive to kill Sidharth, but Maya, being the wife, could have reason to. But then, Vikram fled one crime scene, and was found at another on the same night — we are distracted by the flickering tubelight in the interrogation room, junior cops who keep falling asleep, investigators and their need for tea, even at a crime scene. These small asides add zing to this rather taut and bloody suspense thriller.

And then we get more clues, glimpses of character traits that feed into our own prejudices — at times about a rich, seemingly cold woman, and at times about a desperate writer who has another case pending against him.

Ittefaq’s screenplay is littered with hints about the two murder suspects. Embedded in the story that Vikram tells of what transpired in Maya’s flat, and the story that Maya tells are lovely, tiny details — like where the first-aid box was kept — that lead us one way and then another.

First, Maya’s house, her clothes, her diamonds nail her, and then Vikram’s indifference to a rape victim bothers us.

Dev cracks it and the film flat-lines, till it starts beeping again, urgently…

At the end it needed one more ittefaq to clinch it for us.

Ittefaq has some purportedly scientific explanations — like the one about a head injury and the height of the assailant — which is just bogus blah-blah, words spoken by a man wearing an officious look or a lab coat while pointing at a human bust.

Barring this gibberish masquerading as intelligent investigation, the film’s screenplay is smart, clever.

I both cringed and smiled at the choice of the author’s name. But I laughed out loud at this fabulous comment by a cop to a hassled man who is being dragged to the thana — “If you are right, there is nothing wrong”, and at Dev’s irritated reaction to a broken lift door and the annoying, repetitive instructions of a dismembered, female voice.

It’s this ordinary, everyday chatter that adds a fun, almost sublime layer to Ittefaq — a layer made up of silly, slightly inept cops investigating cunning evil. We identify with the warm, bumbling but morally simple men in charge of pursuing the truth.

Ittefaq entrusts its cracking scenes and lines to an efficient ensemble of actors. All are very good, Sonakshi Sinha and Akshaye Khanna especially so.

Sonakshi is able to add complexity to her character and keeps leading us astray by playing with our silly, fatuous belief that we can judge people’s intent by their clothes, expressions and circumstances.

She creates depth, nuance with slight movements, expressions, postures, and the camera stays on her face watching, wondering what’s going on, what’s she thinking, like it does on Akshaye’s.

It doesn’t stare at Sidharth so much because he doesn’t yet have it in him to create an interior world that at times flashes across his face like it does on Sonakshi’s.

Akshaye Khanna, who often makes do with his own peculiar brand of hamming which involves wriggly eyebrows and a mouth pursed in I’m-taking-my-own-sweet-time-to-brood, is in great form here.

He seems, well, free of his own annoying, smug haughtiness, and plays Dev lightly, with a casual dash of humour.

His Dev, a cop and a family man (wife Mandira Bedi and a framed photo of two kids), is the one who gently holds Ittefaq together by being its warm, smart, moral core.