The film’s screenplay is political and its dialogue piercing, dramatic. 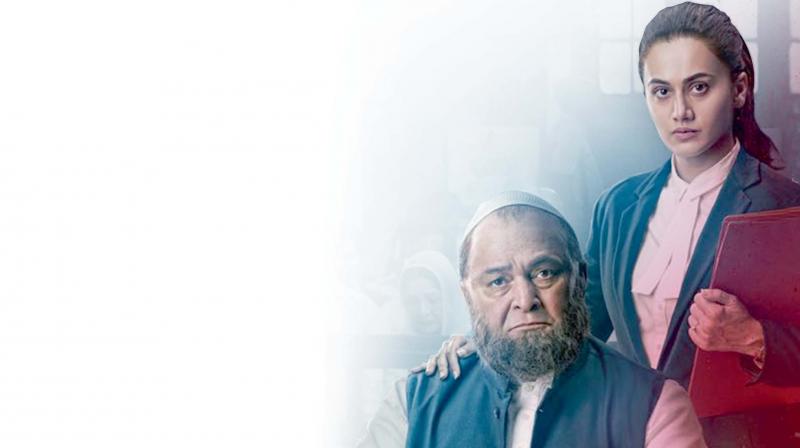 Still from the movie Mulk
Rating:

It is just the worst of times. Secular liberals are flailing, but failing. The world has shifted, but their language, style, worldview remains the same. The narrative is being controlled by another, and they seem to be only reacting.

Their pronouncements of aghast rectitude bounce around in their own echo chambers, amounting to a few cheers but leading, eventually, only to a heightened sense of exhausted despair.

It’s in this viciously coiled, tense state of being, one that is fraught with grievous, ruinous dangers for the country, that Mulk, written and directed by Anubhav Sinha, arrives clutching the Constitution, ready to hear every bigoted comment, give the Hindutva chauvinist his time and play.

Do your worst, it seems to say, and then it allows the main accused — the Muslim community — to take the stand. They are asked to prove not just their innocence in the crime that’s on trial, but to convince how, while wearing the bread and the skull cap, they could love this country.

Sinha’s Mulk (nation) is set in Benaras. The city which was, according to mythology, established by Shiva on the banks of the Ganges, is not just the oldest living city in the world but is, in many ways, the sanctum sanctorum of many religions. Hinduism, yes. But also Buddhism because this is where Buddha gave his first sermon.

It’s also a city where 29 per cent of the population is Muslim, and where Ganga-Jamuni tehzeeb announces itself at dawn everyday with fajr ki namaz and Ram ka naam.

It is also Prime Minister Narendra Modi’s constituency where he loves taking foreign visitors to witness the swirling dance of multi-tiered diyas as brass bells chime to holy incantation.

Mulk arrives at a time when, just 16 km from the ghats, the historic, 150-year-old Mughalsarai station is being painted saffron and its name is being changed to Deen Dayal Upadhyay.

Destruction and healing are not new to Varanasi, the city of death and birth. But they leave indelible scars.

Mulk, set in a locality where Muslims and Hindus live side-by-side, is about how delicately our cities, our country is teetering on the cusp of a chilling change.

Vakeel Saab, or Murad Ali Mohammed (Rishi Kapoor), is the patriarch of a large family that lives at one end of a busy lane where Lallan Pandey, Chaubeyji and others live and run small businesses.

They chatter about cricket, politics, and sip tea together.

We hear murmurs of trouble in her marriage because her husband, their son, wants the religion of their unborn children be decided beforehand, by him. But there’s no time to discuss this. Neighbours have been invited. Thirty kilos of gosht has to be cooked.

Everyone comes. Many dance, some taste the delicious gosht, and some say, “Hum in logon ke yahan nahin khaate”.

The film hears such utterances of almost casual prejudice, but doesn’t react.

Probably because, like most of us, it thinks it too crass to engage with. Or, because matters of faith are best left alone.

Or, perhaps, because no one is fanning tensions.

But then a bomb goes off. People die and a CCTV grab takes the anti-terror squad’s SSP Danish Javed (Rajat Kapoor) and his men with automatic weapons to a hideout for an encounter and then to Vakeel Saab’s house.

Even though the investigation, interrogation is underway, the lane outside seems to have already passed judgment and gets busy meting out punishment.

Personal prejudice gives way to collective, antagonistic assertion of Hindutva. And suddenly, some individuals begin speaking as if they are representatives of the state.

The case moves to the court where questions are asked about Bilal’s links with a terrorist, about the SIM cards missing from his electronics shop.

For the police and lawyers, the many calls Bilal made to Pakistan, and the $1,500 he received seem to be proof of guilt. No one is interested in knowing why.

At first, Murad Ali argues the case. But when the prosecution’s vakeel, Santosh Anand (Ashutosh Rana), turns the case about an individual act of terror into one about a community’s deep conspiracy to destroy a nation, Arti steps up.

There is talk of “inke samaaj mein” — about many wives, many children who only study the Quran and how one is sent to train in jihad.

In the court of Judge Harish Madhok (Kumud Mishra) the film allows all that was once detestable, unutterable to be shouted out. And Santosh does it with the confidence and flourish of a pulpiteer who is seeing a full house for the first time.

There are moments in this game of oneupmanship in court when the judge seems to be swaying where the wind blows.

But then the definition of terrorism, aatank is repeated. The defence calls into question police’s decision to shoot and not arrest, and then asks, how does someone prove their love for a nation? By voting? By paying taxes? By refusing to accept the body of a terrorist son?

Sinha’s Mulk is decidedly high-pitched and lowbrow. There is no subtlety in its characters, plot, dialogue, politics.

Arti, the Hindu bahu of a Muslim family, has to prove the innocence of her father-in-law, and Muslims in general.

Dialogue that will make other movies barf are hurled with abandon.

Its high-octane courtroom rhetoric is as disturbing as it is gripping. And that is where the gutsy brilliance of Sinha’s film lies.

It doesn’t flinch when characters are being brazenly bigoted because it has faith in itself, in its worldview. It knows that its elegant argument at the end doesn’t just have moral and legal underpinnings, but also humanity belonging to a civilisation that has survived and outlasted marauders.

The film’s screenplay is political and its dialogue piercing, dramatic. They are entrusted to an excellent cast.

Rishi Kapoor just keeps going from strength to strength, and sweet Taapsee seems to grow in stature in the course of the film as she goes from a quiet bahu to an angry, clever lawyer. That’s a feat given that she is up against the scarily stinging Ashutosh Rana.

Manoj Pahwa and Neena Gupta ground the film in the house with their gentle warmth.

Rajat Kapoor is very good as the Muslim cop, and Prateik Babbar, despite his brief role, is memorable.

But the film in the end is owned by Kumud Mishra who delicately points at the Constitution and says, “Mandir mein bhashan, Sansad mein puja na ho toh achcha hai.”

I simultaneously burst into tears and an applause when he added, “Whenever you hear too much talk of ‘hum’ aur ‘woh’, election date zara check kar liya keejiye.”

And as I walked away from Mulk, marvelling at its crackling drama, high emotional quotient, its gritty appeal, whistle-worthy dialogues and politics, after a long time I doffed my hat to Bollywood.

Because when mainstream Bollywood begins to get it right, when it finds the strength to articulate what’s right and wrong in a way that sits with audiences for a long time, there is hope.