Arulnithi who has a penchant for whodunit thrillers is at it again. 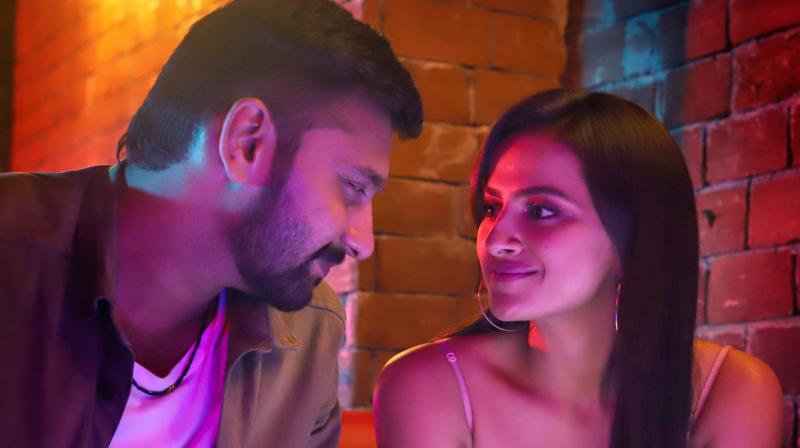 Arulnithi who has a penchant for whodunit thrillers is at it again. And his trust in debutant directors has proved rewarding many times. His latest offering K 13, by newcomer Bharat Neelakandan is no different.

Mathiyazhagan (Arulnithi) is an aspiring filmmaker who struggles to get his break. He goes into depression after his first film, which after a brisk start, gets dropped after ten days of shoot.  At a pub, he meets Malarvizhi (Shraddha Srinath), a writer who is also dejected in her profession for some reasons. They hit off instantly and decide to spend the night at Malar’s apartment with the door number K 13 (title justified). However, when Madhi wakes up,  he is shocked to see himself tied to a chair and Malar in a pool of blood with her wrist vein cut and seemingly dead. Madhi tries to recollect what had happened the previous night. Clueless, he starts searching all over the apartment to know more about Malar. Soon he clears all evidence that ties his presence to the flat and decides to escape.

Now enter few cops to the residential complex to enquire about ‘suspicious activity’ as the CCTV cameras were broken. The rest is all about whether Madhi escapes the difficult situation with the movie ending with an unpredictable shocking climax.

The director relies entirely on Arulnithi and Shraddha to take forward the story and the duo has rather delivered a commendable performance and elevated the suspense quotient of the proceedings.  Arulnithi as the morose filmmaker does his job creditably. Shraddha is equally impressive although she has to maintain a deadpan look as a corpse in most part of the screen space. Yogi Babu in a cameo is effective.

Though first half is slow paced, Bharat has incorporated enough elements to confuse the audience. The link between Malar and Madhi established in a flashback is narrated in a complicated manner. The backstory of Malar and the climax, although a big surprise, seemed to have been a bit rushed.

Technically, Sam CS' terrific BGM and Arvind Singh’s striking cinematography are perfect for the mood of the subject. With several pluses, the film is worth a watch!