If we are really interested in cleansing I think we should continue with the atrocities we are committing to the environment. 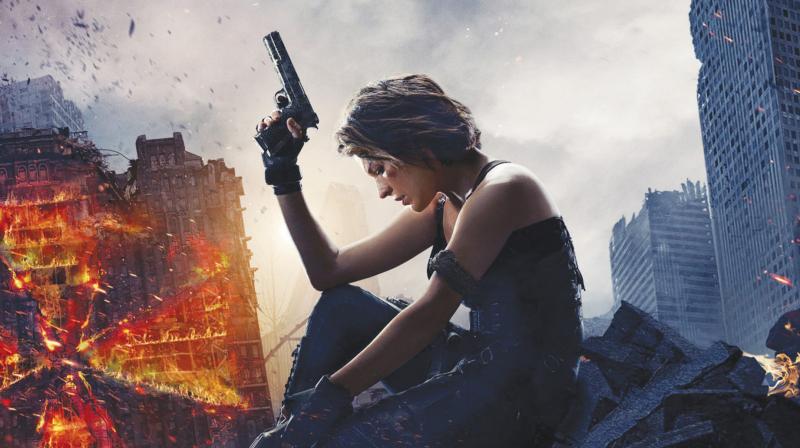 A still from the movie Resident Evil: The Final Chapter
Rating:

It is important for a conclusion to start like a conclusion and Resident Evil manages to do that well. It takes the audience through a crisp background story of all that has conspired so far in the series. One also gets to learn of the origins of the mysterious Red Queen who is the heart of the Umbrella Hive and very quickly it gets established that the Queen is actually trying to help and make it easy for Alice to defeat the plans of the Umbrella Corporation and destroy the T-Virus. It took so long for the makers of this action-packed, overtly disturbing and not very mindful story to realise that it was pointless to go beyond this point. Who gives anything about undead zombies anymore?

Milla Jovovich, the fabulous actress has stayed true to her character till the end, and I think that is the only commendable thing about the whole series. She is a killer machine with no past and a deep crisis of identity. She has been going from one place to another without any real sense of direction, she does represent a vast majority of individuals who keep protesting these days from social media to actual on-ground protest marches without having any clue about the larger systemic problem which is mostly their own creation in the first place. Anyhow, when Alice had no ideas about what she is going to do in this instalment of the series, the Queen tells her about the antivirus that will end all the devastation caused by the T-Virus. The strange thing however is the fact that it took such a long time for a super-advance computing system to come to the conclusion of aiding in the destruction of its creators. If it really is smart, it should have worked millions of calculations per second, analysed every possible outcome and thus arrived at self-destruction long ago.

Moving on, the film does good to your sense of awe and ouch by giving you some really ugly monsters (undead zombies) to look at, but it is a bit harsh on the eyes due to the poor lighting and extremely shaky 3D visuals. The thrill of the fight is not interesting anymore, because by now you are well aware of the tricks that the film will have — the shadows, shrieks, lurching figure and then the shock of the visual. So overall, this film leaves you a bit cold in the chair, if you are not the one who is watching this as the first film of the series.

At the heart of the series lies this very idea of cleansing the earth and rebuilding it from the ashes of the destruction so required. This particular idea is prominent across religions, faiths and practices across the world. It is such a classic idea that it has been repackaged and sold in all forms of containers, and we have bought it every time but at the cost of other’s destruction. We have all wanted to be the Noah or one of the several thousand chosen ones in cryogenic sleep in the Umbrella Hive. We toy around the idea so much but we aren’t really willing to give ourselves up, and that is why the cleansing always fails. It cannot be engineered, and humans must accept it for once. The world has lived though many similar events since time immemorial, in the recent past we have a well documented event of the holocaust that was yet another attempt of man to cleanse the earth of the scum and rebuild from the ashes. If we look at the kind of gossip/news that is circulating around, we might think it is time for another cleansing, who knows what will happen this time.

If we are really interested in cleansing I think we should continue with the atrocities we are committing to the environment, and also with the mindless political and economical charades that we so like to flaunt, and soon the cleansing will happen organically, cleaning everything.