Jackie Chan is great. Not just as the bumbling, fighting professor, but also as the Bollywood hip-shaking hero. 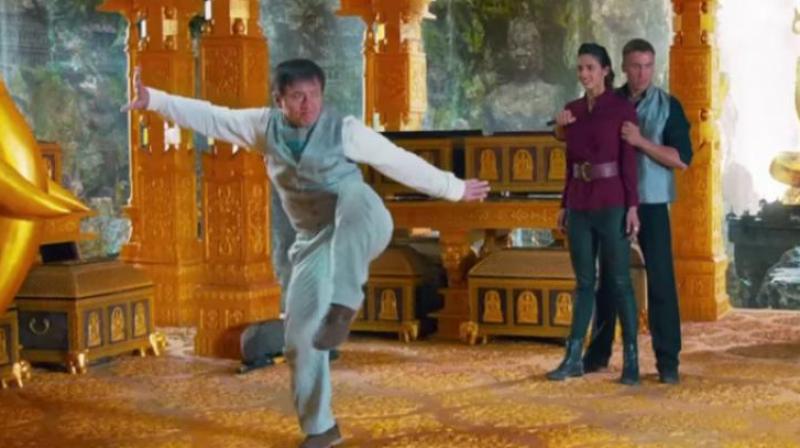 A still from the movie Kung Fu Yoga
Rating:

Unlike how it was in our days, aaj kal just kung fu is not enough. It is treated like a sad, lone salwar in need of a matching kurta.

So filmmakers feel the need to accessorise it — with pandas, hustle, fury and, now, yoga — to make it more, I guess, palatable and fun.

I shouldn’t say that tastes are getting worse, at least of B-grade chop-slash-kick-haiiya filmmakers and audiences, but they are.

Kung fu has lost its cool quotient. When it was austere, it had gravitas. Now that it is all animated and glamorous, it is silly and comical.

What we get now mostly is kung fu with life drained out of it, as if after destroying Bollywood dancing, Shiamak Davar has taken it upon himself to ruin kung fu by choreographing it in six-step routines.

If you are of my vintage, then you have grown up on films that were pure kung fu. Of course, those were kung fu’s heydays because we had in our midst Bruce Lee.

We all religiously trekked to the local video shop owner bhaiyya to rent and then bow to Lee’s chutzpah and superfast superpowers.

We grew up, and sometimes still live on Enter The Dragon, Fist of Fury, The 36th Chamber of Shaolin. That’s before the time of the silly, bumbling god of kung fu, Jackie Chan. Once we discovered him, it was, every other weekend, Drunken Master, Snake in the Eagle’s Shadow and whatever else we could find.

Compared to those films, kung fu films now are apologies. The action is all video-game like, and if chopped heads are not spouting blood, then someone is doing something stupid to make us laugh.

Kung Fu Yoga is that sort of film. It’s not bloody, because it’s aimed only at 12 year olds and younger. It’s just desperate that we laugh.  That, for me, is very sad.

Jackie Chan is old, sure. He is slower, and the chops don’t fly. But he has that magical thing few have — he can transform into a Miyagi-like kung fu master which we witnessed in the new Karate Kid. I wish there was bit of that magic here too.

We land in an animated world where Indian haathis are running about tossing people. Some sort of war is going on and it involves the ancient Tang Dynasty and Magadha, not necessarily on the opposite side.

One key person then was Geetanjali Maharani, a strange radio newsreader voiceover tells us. And there is talk of some very precious khazana.

So cut to present-day China where anthropologist-professor-genius Jack (Jackie Chan) is pioneering some colour restoration technique to bring out the true nature of the Terracotta Army.

His fame and fabulous talent have drawn one Asmita (Disha Patani) to him and thus beings the gathering together of a lot of people who talk about some lost treasure, finding it by going on a mission to some frozen parts of the world where the Twin Dragon River runs cold and deep. Pause now for Asmita and her yoga gyaan.

She says — and you must listen carefully to this — that humans are actually like fish. Because, you see, in mymmyji’s tummy we all float and breathe and live for nine months, we can all breathe and live in water when we grow up. And yoga, she adds, teaches us how to.

All the time wearing a smug expressions. Apparently, like stone beats scissors, yoga beats kung fu. Asmita, of course, forgets to finish off her gyaan with, a salute and Jai Hind!

In all, yoga, kung fu and lots of mumbo jumbo make up an idiot premise that’ll do for a film like this. I just wish they had all talked less and kicked each other more.

Kicking begins only when evil man Randall (Sonu Sood) enters the scene to steal the diamond key to find the real khazana.

I have never heard of any Rajput called Randall, but there he is, riding a horse, weaing ugly velvet kackets, unleasing evil men and forces on the good people after the khazana.

The keys he is after keep going from one person to the other and this, luckily for us, results in funny and rather entertaining fight sequences. The one with the hyenas is better than the one in the icy gufa.

But the chase with the pukey lion in the backseat and the hanging in the ancient, underground ruins with the swaying orange cobra are both great fun.

If you can tolerate or, well, sleep through about 80 minutes of Kung Fu Yoga’s idiot talk, you will come to an Indiana Jones-goes-bonkers type of climax. And then the kung fu master and his minions will break into the cutest Bollywood-dance. If you are going to pay to watch this film, I beseech you to stay on for the last song. It’ll send you off smiling.

Jackie Chan is great. Not just as the bumbling, fighting professor, but also as the Bollywood hip-shaking hero.

Sonu Sood seemed as misplaced and wasted as the Indian beauties in their dupatta-less ghaghra-cholis.