Oru Kidayin Karunai Manu movie review: The film floors you with its modest yet quirky theme

A sharp and intelligent screenplay that throws up some pleasant surprises. 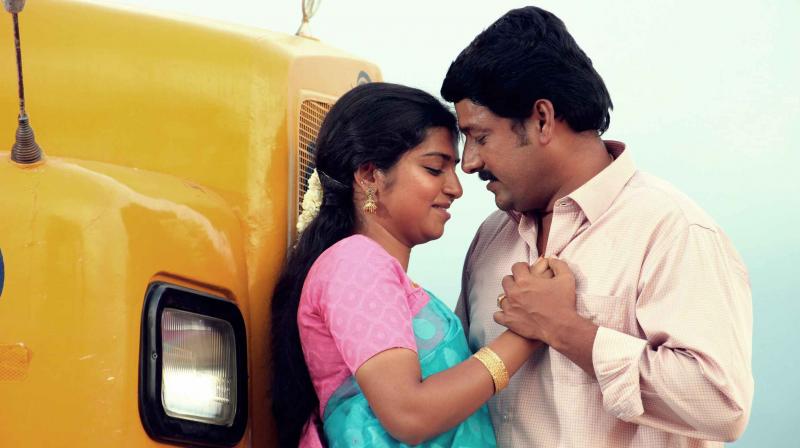 After getting critical acclaim at various international film festivals including the New York Fest, debutant Suresh Sangaiah’s comedy drama ‘Oru Kidayin Karunai Manu’ has hit the screens. Like how young and first time directors shine in K’town these days, Suresh’s film, which is inspired by his real life experiences in his native Rajapalayam, simply floors you with his modest yet quirky theme recounted with great confidence.

The entire proceedings are narrated through the eyes of a goat that is soon to be offered at a temple, which hints that the movie is not the run–of–the–mill kind.

People of Naduvampatti decide to visit their family deity Muniyaandi Temple which includes a newly married couple Ramamoorthy (Vidarth) and Seetha (Raveena) as the former’s grandmother promised a goat to be offered to the deity once her grandson was married. They hire a lorry and midway in their travels, their vehicle hits something in a remote forest. They find a man dead in front of the vehicle along with his motorbike. And much to the shock of others, it was Ramamoorthy – trying to impress his young wife – who was at the wheels.

After initial arguments and discussions with each one throwing their own ideas, finally they decide to hush-up the murder. Meanwhile, Ramamoorthy calls his lawyer uncle (George) to the spot. What started as a happy journey eventually turns a spot of bother and how each one reacts to the confused situation forms the rest. Apparently, the underlying message is the reaction of people to human life as opposed to the prospects of slaughtering an animal (goat).

The success of the movie is largely due to its apt casting and well-defined characters, small or big. Sangaiah has utilized the strength of all actors - some are fresh and others less known - to his advantage and has delivered an engaging and entertaining fare. And the peculiar names of the various characters like Kondi, Arumpaadu, Yezharai, Sevval (that are common in Rajapalayam belt) and their native Tamil are appealing elements. Some of the double meaning dialogues mouthed even by the ladies of the group do not come across as intrusive, as that’s how the villagers express their naughtiness. The rustic humour is in built and enjoyable.

Vidarath should be lauded for being part of good scripts. Here he pulls it off with utmost ease. Raveena - the dubbing artist turned actress - is not that great looking but she suited the role and has done her part well. Seasoned actor George proves his versatility in a role with slight negative shades.

Music by Raghuram and cinematography by Saran go well with the rustic mood of the film. Editing is also perfect.

A sharp and intelligent screenplay that throws up some pleasant surprises (besides being light and gratifying) holds the film together. It has its thrills in the right place and all the characters including the goat are warm and human. A film not to be missed!