A Death in the Gunj movie review: The games people play

Watch A Death in The Gunj for all this and then give yourself some time before you start talking about it. 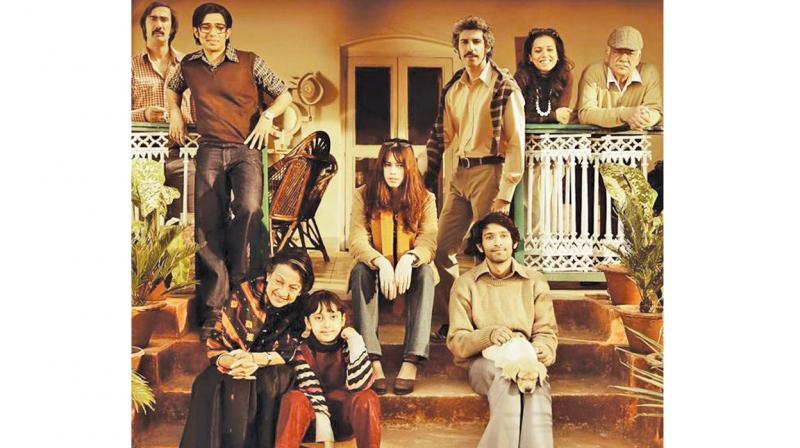 A still from the movie A Death in the Gunj
Rating:

36 Chowringhee Lane (1981), Aparna Sen’s debut film, was mostly in English, with a sprinkling of Bengali.

It told the story of a lonely Anglo-Indian teacher in Calcutta and an exploitative couple she thinks are her friends.

Konkona Sen Sharma’s directorial debut, based on a short story written by her father, Mukul Sharma, is a quietly devious film in which a timid, reticent young man, without doing much, but simply through his vulnerabilities, brings out the worst in people around him — people who are members of his extended family.

Like in her mother’s debut, Konkona’s characters too speak in English, with some darling asides in Bengali.

36 Chowringhee Lane stands apart from all that Aparna Sen has made since essentially because of Jennifer Kendal’s performance.

So, despite the similarities and familial affinities, it’s not fair to compare the two films.

But if I had to, I’d say Konkona’s A Death in The Gunj is confident in its skin, and is, in many ways, a bolder film — technically and politically — than 36 Chowringhee Lane.

For one, its protagonist is a man who doesn’t quite fit into patriarchy, and just by being himself, exposes those around him. I can’t recall the last time I saw this on Indian screens.

Set in 1979, A Death in The Gunj begins with the climax — a body in the dickie of a blue Ambassador that has a West Bengal number plate. And then it winds back to seven days ago, to Day 1, when Nandan (Gulshan Devaiah), his wife Bonnie (Tillotama Shome), along with their little daughter Tani, and two cousins, Mimi (Kalki Koechlin) and Shutu (Vikrant Massey), arrived in McCluskiegunj, Ranchi, for a yearend trip to the house of the senior Bakshis.

Nandan is Anupama (Tanuja) and O.P. Bakshi’s (Om Puri) son. This flashback begins when they stop on the way at Curney’s to buy cakes and bread for `9 and chaar aana before arriving in the house to a warm, rushed welcome. Soon they are joined by Nandan’s friends — Vikram (Ranvir Shorey) and Brian (Jim Sarbh).

Between their arrival and settling in, followed by chatter over drinks and dinner, the dynamics are clear. Shutu is the extra, the tag along, the hanger on.

Over the next six days, in this quiet, slow world where dusk slowly creeps inside the house, never quite leaving despite the lights and candles, they play several games — planchet, cards, chess, kabaddi — go on picnics and throw parties.

Mostly Shutu sits in the periphery, looking in — he’s interested and craves participation, but is unsure of his place. On the few occasions when he is pulled in to participate, he gets picked on, bullied, made fun of, even beaten.

The film often stares at Shutu, while Shutu, wearing his dead Baba’s hand-knitted, oversized sweater, stares at the goings-on. We see how often and how casually he is ordered around, and we get a sense of the demons he struggles. We see the things he likes, and catch him stealing furtive glances at Mini.

Though the family branch on which Shutu and Mimi sit is not clear, through snatches of conversations we pick up some gossip — about Shutu failing his PhD, ignoring his mother, about Mimi behaving just like her mother did around men.

One of the film’s many strengths is its interest in and exploration of couple politics.

There are several couples in the film. There’s a young, married couple with a young child who find time for quick oral sex in the afternoon. Then there’s an old married couple who have settled into two comforting, parallel rhythms of life. When they cross, there’s irritation.

There’s also an adulterous couple, a newly married couple, and a working couple — Manjari the maid and Maniya, her husband.

Shutu, whom Nandan often calls “kid” despite his age, intelligence and educational qualifications, is coupled with Tani — he’s slightly elevated from the station of the help, but is often treated worse.

Shutu gets told what to do, how to be, and the one compliment he receives from Mimi is ambiguous. “You are so pretty, you could be a girl,” she says.

And whenever someone feels disempowered, rejected, they find some use for Shutu to get their power, mojo back.

Day 6, someone goes missing, someone falls in a ditch and is forgotten while a wolf is on the prowl. Day 7, Shutu fails Bonnie and the only real relationship he had, snaps.

A Death in The Gunj ends on a note that fits in well with McCluskiegunj — a place set in the heart of Chhota Nagpur plateau’s tribal belt, where Ernest Timothy McCluskie, an Anglo-Indian from Calcutta, carved out a homeland for 400-odd Anglo-Indians in the 1930s, complete with bakeries, hunting trips and picnics under the shade of a tree.

This place, with its low-voltage lighting and lingering memories of a world that is long gone, lends itself nicely for a touch of the spooky.

A Death in The Gunj is a film made by a woman with serious cinematic pedigree. So the things it looks at, the way it looks at them, the places it goes to, the time it spends on silly bickering over cooking, are refreshing, charming things we don’t often see.

The film could have been set in any period. That Konkona’s film harks back to a time and place that sat uneasy on the decaying remains of the days of the Raj and the new ways of educated, middle class Indians who are privileged and slightly obnoxious, is essential to the film.

The director, along with the lighting, camera and art department, uses this low-voltage world, complete with men flaunting long sideburns and Yezdi bikes, women in flared pants, trunk calls and blue inland letters, to create a mood, one that tell and believe an unforgettable, surreal story.

A Death in The Gunj almost stars the late 1970s in all its dimly-lit, nostalgic glory, with matching, exquisite performances.

What a sad, depressing delight it is to meet Om Puri once again, next to Tanuja who is as pitch-perfect and natural today as she was as Anjali Nath in 1967 (Jewel Thief).

Tillotama Shome and Gulshan Devaiah are excellent, and I must stop singing Ranvir Shorey’s praises because he is always superb. Always.

Vikram Massey is very, very good. He reminded me of young Kay Kay Menon — those early days when he would be cracking inside and connecting with us in a way so visceral and sexy.

Kalki just keeps getting better and better. Her control over her face, body is rather insane. She’s able to convey a lot of internal chatter with very little movement.

Watch A Death in The Gunj for all this and then give yourself some time before you start talking about it.

You’ll find yourself savouring certain moments, item from it long after it’s gone.