A perfect stress buster for the common man, this film should not to be missed at any cost this weekend. 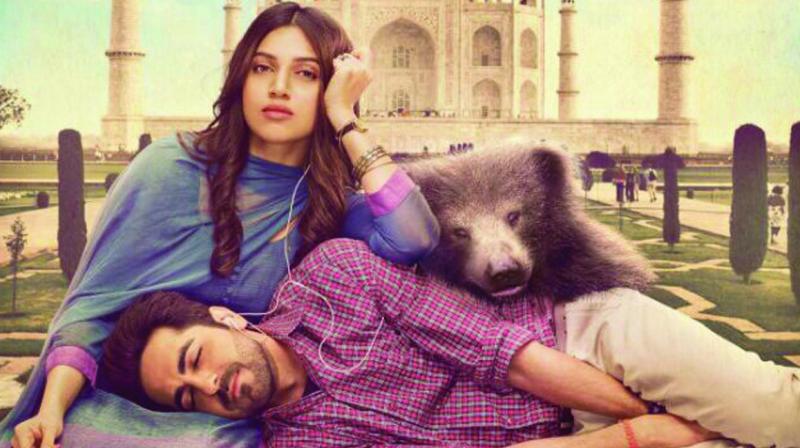 Love cures all, including erectile dysfunction! Just give it some space to deep-breathe, relax, do some dhyaan over its performance anxiety and soon you’ll find that life is shava-shava mahiya…

Cynics like me will probably say LOLZ and then do some ROFLing while kicking our legs in the air.

But choo-chweet Shubh Mangal Saavdhan believes so firmly and earnestly in the therapeutic and curative powers of love that it’s just mean to keep sniggering.

Though, much like its theme, there’s a lot of charm and joy in this film, followed by terrible drooping and slumping, Shubh Mangal Saavdhan, by director R.S. Prasanna, is cocksure in its belief. And so we go along, hoping that it will rise to the occasion. Literally, of course.

It tries, but doesn’t quite.

Shubh Mangal Saavdhan, SMS for short, tells the story of two Delhi Brahmins — Sugandha Joshi (Bhumi Pednekar) and Mudit Sharma (Ayushmann Khurrana) — who work in Nehru Place and often check each other out.

While Sugandha, Sugu, talks only in filmy dialogue, dreaming of a filmy romance, complete with angry parents and evil men, Mudit is the normal kind and tries to talk to her one day. But just as he’s walking towards Sugu, a performing bhalu drops his act and attaches itself to Mudit’s leg and proceeds to, well, make out.

Soon they are both sure that they have found their soulmate and proceed to go through the rituals of that lovely oxymoron called arranged-cum-love marriage.

But on the one occasion when they are all alone and dying to do it, he can’t.

Though Mudit loves Sugu dearly, he thinks he should not marry her. Sugu, upset but in love, says love is important, sex is not.

Awwww, sweet idiot, you think. And so does her dad.

But Sugu wants Mudit to talk, to discuss, and celebrate their celibate union. Mudit, however, is too morose. And once her father and then his dad get to know about this Sharma shame-shame situation, there’s too much cacophony all around for anyone to say or do anything sensible.

There’s some talk of mard log and their mardangi, and an attempt to marry off the girl to a kele ka ped, but shirtless Mudit and dupatta-less Sugu declare their love to their families and friends while they look askance.

Indian films, especially those out of Mumbai, have for more than a century devoted themselves to creating and then haranguing “baanjh aurats” and “manhoos bahus”, but have hardly ever questioned the hero’s so-called “mardangi” because that’ll just, you know, bring the whole penile edifice of patriarchy crumbling down.

Writer-director Prasanna takes up this uncomfortable issue, makes it the focus of his film and then pooh-poohs it as a non-issue, treating it like a brief rukawat-ke-liye-khed-hai moment in a life-long romance.

To tell his tale he has put together some members of the troupe that had, in 2015, gathered around a motu bahu in Haridwar (Dum Laga Ke Haisha). Smart move.

His film is short, fun, and has entertaining performances. Sugandha’s father is played especially flawlessly by Neeraj Sood, next to the spontaneous Seema Pahwa.

The MIG family life that he creates around the Joshi parivaar is fun and heart-warming.

Despite this and the crazy, loud chaos of a middle class shaadi in Haridwar that follows, SMS doesn’t quite feel life a complete film.

Like its hero, it loses its mojo half-way through. There on it feels more like an extended video made by some matrimony/shaadi website with a sermon at the end against social evils and erectile concerns.

This is because there isn’t much substance to its characters and story.

For example, we have no info whatsoever about Mudit’s relationship with his, well, chotu.

The film doesn’t tell us whether he could do it earlier — solo, or with that strange girl who keeps wrapping herself around him like clingfilm every time she’s unleashed. We must assume that he could.

Like hamare bade-buzurg, Shubh Mangal Saavdhan believes that shaadi kar lo, phir sab theek ho jayega… That’s why, perhaps, it doesn’t quite get to either discussing the issue properly or dealing with it. Worse, it does not exploit the full comic potential of the situation.

I mean, there was that bhalu whose touch cursed Mudit, and then there was, so close to Nehru Place, Sablok Clinic.

Now that’s one place many of us have been dying to visit since the 1980s because there dwells a gori-chitti, voluptuous woman who is the Sanjivani Booti for all toote, phoote mind-body parts.

Ayushmann, who has been a happy, proud sperm donor of repute, is fabulously frustrated at not being able to muster up any this time.

And after three films, Bhumi Pednekar has become a veteran angry bahu, adept at expressing her irritation and impatience in ways that are not just homely and effective, but also empowering.

As the half real, half nautanki Sugandha, she’s fast, furious and nice.

There was a time in India when directors, dying to tell us that a man and woman had, you know, done it, had to resort to euphemism. They were obvious, suggestive and came in stages.

That two lips were meeting was deduced from two flowers banging their heads together or two birds going chonch-to-chonch.

And when it was the real deal, we got water falls, lightening, rain, erupting volcanoes and the Bhakra-Nangal Dam.

So what does a director do when he needs to show that while the girl is an eager beaver, the boy is, you know, not being able to, ummmm, have sex. He shows a biscuit dipped in tea going limp and then falling off. This is followed by Sugu’s fabulous friend Ginni saying, "Biscuit gal-gal ke gir rahe hain…"

Director Prasanna who has also written the film’s story and had made a Tamil version in 2013 (Kalyana Samayal Saadham), beautifully and repeatedly articulates the “gents problem” in ways that are funny and not crass.

Problem is that his film screams for some crassness, a la Dada Kondke. Alas!