Thirumanam movie review: Engaging for the most part

The story is about a brother played by Cheran and the struggles he encounters to get his sister married off. 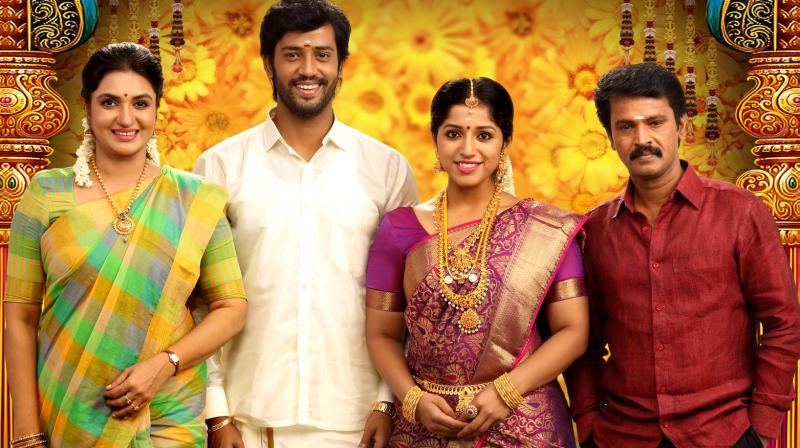 Cheran known for his emotional dramas, which hails family relationships and values, is back after a hiatus. His latest offering Thirumanam dwells on preparation for a marriage. The film reflects the common people’s life and how money plays an important role and how shortage of it affects their life forms the crux. The story is about a brother played by Cheran and the struggles he encounters to get his sister married off.

Mahesh (Umapathy) and Aadhira (Kavya Suresh) fall for each other. And problems start when they decide to marry and approach their respective families. Interestingly both the families agree to it after a thorough thought. Now begins the process of arranging for their wedding and what follows if a series of pinpricks.  Mahesh's elder sister Manonmani (Sukanya) and uncle Arunachalam (MS Bhaskar) meet Aadhira's brother Arivu (Cheran) and uncle Kumaraguru (Thambi Ramaiah) and mother Vadivaambal (Seema). It is here the trouble starts when Manonmani wants a gala wedding while Arivu prefers a simple affair. They differ on many things, which results in a chain reaction. Arivu thinks practical and executes things without wanting to hurt anyone.

Cheran plays his part well. As usual, he scores in emotional scenes. Sukanya who returns after a gap puts up a decent feat. Both Thambi Ramaiah and M S Bhaskar got under the skin of their characters to excel. The romance and travails of lover couple Umapathy and Kavya Suresh have been captured well. The movie has its moments with well-etched characters some sharp dialogues about wedding. But a feel of a soap show could have been avoided. Also, the movie at times begins to get preachy. But all said, Cheran has made an honest attempt and weaved a tale that is engrossing and engaging most part of it.

Rajesh Yadhav’s cinematography and Siddharth Vipin’s music go in tandem with the theme.