The film is blessed by actors who can hold a scene without doing much. 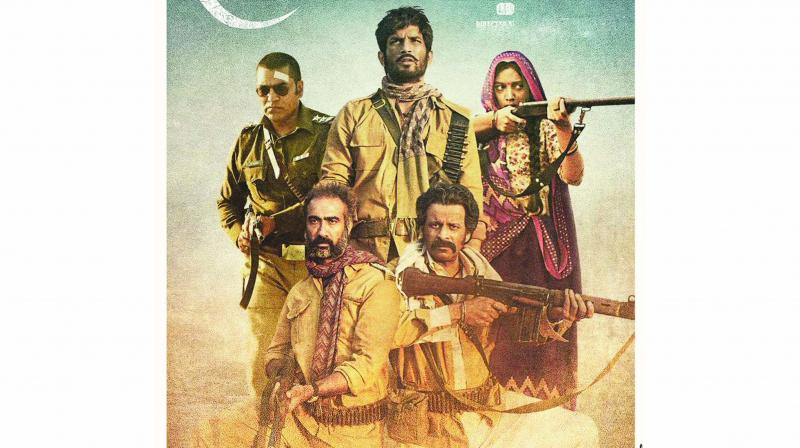 Western is a genre defined by the most alpha of men — beginning with John Wayne and pausing at Clint Eastwood.
Rating:

Redefining genres, turning them inside-out, upside-down is the wont of many writer-directors. And many have done it rather well, successfully. But few, very few can recast a genre in a way that retains the edifice quite robustly, but has stuffing that’s entirely antithetical to the spirit of the genre.

Western is a genre defined by the most alpha of men — beginning with John Wayne and pausing at Clint Eastwood. These are men who strut their guns and stuff for other men.

How absurd, laughable, sacrilegious and subversive then is the thought of a feminist Western. And one that’s set in our own behad (wasteland)?

Seems like writer-director Abhishek Chaubey, like his mentor Vishal Bhardwaj, is cocky and given to blasphemy. His Sonchiriya is just that — a Western gone feminist!!

It’s also a carefully observed, sharp film with a touch of the wicked and mythical that is also oh-so-political.

Set in a world where caste is above all, where treachery and guile are common, Abhishek and his co-writer, Sudip Sharma, weave a tale so twisted and yet so subtle and stunning.

In the very masculine world of Thakurs and Gujjars, where women don’t dare to venture, and when forced to, they draw their ghoonghat long and either quiver or draw a rifle, unfolds a story that is deceptively linear, but one that keeps collecting tributaries of other tales and characters.

As the story of the baaghis of Chambal unfolds with cyclic, bloody bouts of honour and vengeance, of caste exerting itself, it also tells us a familial tale about a mother, a son, a husband, the larger family and the daughter of a latrine-cleaning achoot (untouchable).

Packed in this tale of macho upper caste men with their moustaches, proud red tilaks, and dhotis that don’t touch the ground, is the devastating story of women. Simmering, suffering, but at one point saying, ab bus.

Sonchiriya has a healthy taste for the absurdly comical, and is deeply, delightfully feminist.

In one scene the word it uses for a rapist is “namard”, and it’s said by another man!

Sonchiriya opens to just the sound of flies buzzing about. Around what, we see a few seconds later.

The screen fills up with an open, still eye, and some bloody innards of what looks like an animal. Which animal? We figure that a few seconds later.

Men in khaki, with rifles and SLRs slung on their shoulders, and gamchas wrapped around their necks are walking. From their little chotis sticking out of their matted hair we figure they are upper caste.

They carry along superstitions, about the dead and bezuban — animals, children, women — and so they stop and stare at the dead animal.

But Sardar Man Singh (Manoj Bajpayee) casts it aside, and tells them to carry on.

The ominous sign, however, lingers in many heads, some of which already carry a heavy burden and a curse. Two are also haunted by visions of a five-year-old girl, bloody and pointing a finger.

In discussions about buying guns, chatter about where you go, of Phuliya, caste keeps exerting itself. It’s supreme. Above all else.

Here it is Gujjar vs Thakur, and everyone vs Mallahs and other lower castes.
Snakes eat mice, and vultures eat snakes. That’s the code of life they all live by. Man Singh, who often says “Hari Om”, is given to regular bouts of generosity, something his second-in-command, the perennially wide-eyed and bristling Vakil (Ranvir Shorey), doesn’t much care for.

So when Lachchu from a village brings the khabar of a wedding where a lot of cash and gold will be given to the goons, Lakhna disapproves of going into the village at a time when Virender Singh Gujjar (Ashutosh Rana), the daroga of STF tasked to clear Chambal’s ravines of dakus, is after them. But Vakil doesn’t say anything.

Sonchiriya is mostly set in the ravines of Chambal, making brief trips to villages, often for encounters with cops, that results in tragedy.

This single-tone landscape is a natural construct, perhaps, by Maa Bhawani for her baaghi bhakts.

The wind hardly blows here, and yet everything gathers dust, dries and is barren, except for a few thorny shrubs.

It’s vast, and yet it hardly ever reveals its size to its inmates, or the malevolent men it hides in its treacherous bends till it is too late.

In one encounter scene, set in 1975, Emergency is being announced on radio, in English, Sonchiriya shows us images of Indira Gandhi.

And then the movie squints, smirks, and Man Singh adds, “Bhaiyon aur behnon...”

Rarely, very rarely do we get a screenplay that is so deliberately cock-eyed, dazzling us with something while commenting, sacrcastically, at another.

While Indira Gandhi is used to create a context, it’s also a nazar battu, a talisman to ward off the toadying stupidity of the censors while slipping a sharp comment on, well, you watch and tell me.

After this encounter, many die and soon Indumati Tomar (Bhumi Pednekar) arrives cradling little 12-year-old Sonchiriya who is bleeding. She is an untouchable.

There is talk of surrender, of Maa Bhawani being unhappy, of offering her a sacrifice.

Then Indumati’s husband and son arrive, to tug at the film to go on another tangent, but since it doesn’t, they decide to just follow, joining in ever so briefly at times to make us to listen to their story.

As the film is marching through the ravines, towards yet another encounter, we meet Phuliya and her Mallah gang. Here again there’s talk of caste and one women says to another, castes are for men. Women belong to a different caste altogether, below all others.

As the film moves to its climax, it packs in a twist that makes you trudge back mentally, to revisit several scenes that now have new meaning.
I plan to watch Sonchiriya again, soon.

Since Ishqiya, it's been apparent that there's a certain alchemy, a magic to Abhishek Chaubey's direction. Without seemingly trying very hard — all the hard work is done and hidden in the layered story, screenplay, crackling dialogue — he creates and conjures a world where everything is in its right place, including the actors.

His screenplay here is especially serpentine.

Though it's heavily loaded with gender and politics past and current, and it delivers all this with a sly hand, yet the film moves surprisingly lightly, with a seductive grace, all the while taking strange turns, ducking in and out of holes and twisting and stinging all along.

Sonchiriya has several encounter scenes where men draw and point their guns at each other before shooting.

These scenes are framed stunningly, as still portraits drawn from the master conductor of boys and guns — Quentin Tarantino.

Anuj Rakesh Dhawan's camera often follows these men, staring at them from behind, but when guns are drawn it swoops above or ducks to behold them, just a bit longer.

The rhythm of the cinematographer and editor Meghna Sen, to the beats of the screenplay, is like a tango, moving with grace, but ever so often pausing. In some scenes there's a cadence to this visual dance, a tempo.

Sonchiriya moves, grooves and then pauses — to do a little jig or make us admire its showy pose.

These shots carry a temper and a mood — that of the stillness of the endgame, much like it is in many of Takeshi Kitano's films.

The film is blessed by actors who can hold a scene without doing much.

And though Sushant Singh Rajput is surrounded by formidable actors —Manoj Bajpayee, Ranvir Shorey, Bhumika Pednekar, Ashutosh Rana and other supporting cast are all excellent — he is able to hold scenes on his own. Though his blankness peeps out of his eyes at times, the more down and dirty he gets, the better he is. It was a pleasant surprise watching him.