Pari is a delightful treat and it is advised that people with weak hearts should enter the theatre at their own risks. 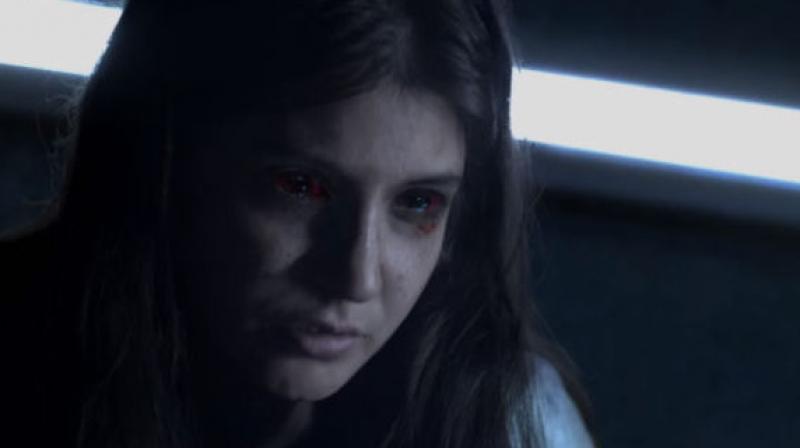 Anushka Sharma in a still from 'Pari.'
Rating:

Far away from ugly ghosts, black magic and many such tried and tested formulas of horror in our Indian films, Pari is not only a great horror film with an intelligent plot but also is technically very strong. Director Prosit Roy, who marks his Bollywood directorial debut with this spine-chilling film, shines bright with a 'paisa vasool' entertainer!

Arnab (Parambrata Chatterjee) hits Rukhsana's (Anushka Sharma) mother while driving on a rainy day which leads to her death. In his guilt, Arnab decides to help Rukhsana but little he know about the consequences as the latter falls for him while the former is engaged to Piyali (Ritabhari Chakraborty).

Professor (Rajat Kapoor) is on his mission to find Rukhsana and kill her. Meanwhile, he accidentally meets Arnab and is able to reach Rukhsana. Why the professor wants to kill Rukhsana is the question here? Will Arnab leave Piyali for Rukhsana? This is all what you have to find for yourself.

Pari, not a fairytale, has an excellent plot! The captain of the ship, Prosit Roy, not only tells a spine-chilling story with finesse but also impresses with his directorial skills. Few moments such as the interval point will hit you hard. It might be a possibility that you will see most of the film covering your face in fear, courtesy the brilliant background score and the crisp editing. Writers Prosit Roy and Abhishek Banerjee craft a gripping story which will keep you glued till the end. However, the second half is a little dragged, but it can be easily overlooked.

Be it professor's secret of his artificial eye, or Rukhsana's helplessness of being an abuse victim, from Arnab's finding the truth to revealing the mystery, everything about Pari is ridiculously horrifying.

Anushka Sharma easily attains the status of an actor post Pari. She is exceptionally good in the role of Rukhsana. She has some of the best moments on screen. The way she exposes herself to the outer world is emotional especially when she falls in love with Parambrata. Parambrata is the master of his craft. His act in Sujoy Ghosh's Kahaani was phenomenal, and in this one too he is noticeable. Rajat Kapoor does an excellent job as a scary professor. His character has an undertone of a grey shade which is too admirable. Popular Bengali television actress Ritabhari Chakraborty plays her brief role with ease.

It is advised that people with weak hearts should enter the theatre at their own risks. Pari is a delightful treat to those who are fond of horror flicks. And stop complaining that Bollywood doesn't produce good horror films!