The film not only has a beautiful message but also an ability to tickle one's funny bone for a good 105 minutes. 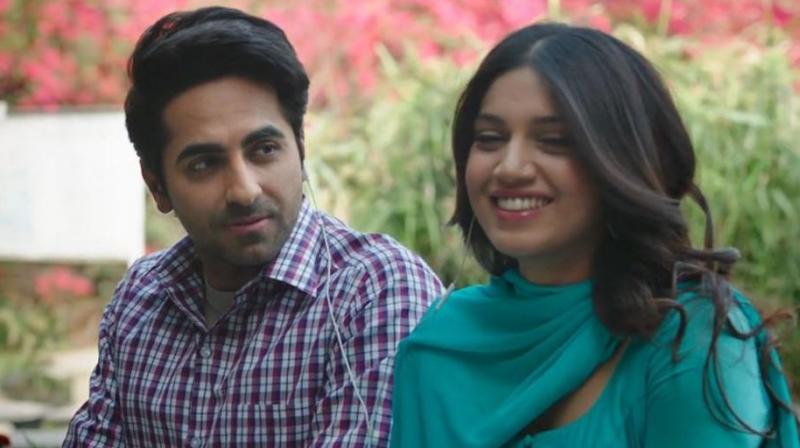 Adapted from the superhit Tamil film Kalyana Samayal Saadham helmed by RS Prasanna that released in 2013, Shubh Mangal Saavdhan isn't a sex comedy but a complete family entertainer. The film not only has a beautiful message but also an ability to tickle one's funny bone for a good 105 minutes.

Mudit Sharma (Ayushmann Khurrana), falls in love at first sight with Sugandha (Bhumi Pednekar), and sends an online marriage proposal to her. Both the families meet and the two get engaged, but Mudit finds himself in a soup when he discovers he's suffering from erectile dysfunction. Will Sugandha marry Mudit despite knowing Mudit's 'gents problem', is what Shubh Mangal Saavdhan is all about.

One of the shortest commercial films in recent times, Shubh Mangal Saavdhan comes as a breath of fresh air. Though 2017 had seen many films based in small towns dealing with human interest stories such as Badrinath Ki Dulhania, Bareilly Ki Barfi, Toilet: Ek Prem Katha, to name a few, Shubh Mangal Saavdhan stands out in several aspects. The highlight of the film are its dialogues written by Hitesh Kewalya. You will find each and every dialogue to be clap or whistle worthy. First half of the film is so entertaining that one won't see the interval point arriving. Although, the film is slightly dragged towards the climax, it can be easily overlooked. A typical hero, who is madly in love with his ladylove, will do anything to achieve and impress her. Imbibing that, Mudit's confession of his love is too melodramatic in the end but still made sense.

When the trailer was launched, the film held so many expectations and all of them fall in place. In fact, the trailer is not even close to what the film is. Director RS Prasanna does a commendable job in keeping a North Indian essence intact with a clean family entertainer. Surprisingly, the film has a mass appeal considering it is set in Delhi and Haridwar. It is relatable to a person viewing in the metros as well. The most quirky portions of the film are its interpretations, be it a biscuit turns soggy after dipping it in a hot tea, droplets dripping from the tap or the conversations, all are in the sync with the context. The film is offered by the makers of Tanu Weds Manu franchise, Raanjhana and Happy Bhaag Jayegi and with this film too, they have proved that they are a brand in making family entertainers.

The tagline of the film, "Stand up for love," depicts a wonderful thought that love is even beyond physical compatibility. With the fresh thought, the film is a laugh riot too. Ayushmann Khurrana, who was recently seen in Bareilly Ki Barfi, portraying a somewhat similar role of a small town boy, has done a far better job in this one. Maybe because he has more scope as an actor. His shyness, aggression and the way of romance is to watch out for. Though his act will remind you of him in Dum Laga Ke Haisha and Vicky Donor, an interesting premise does wonders for him.

Known for making her cult status with films based in UP, Bhumi Pednekar is a cherry on top in the film. Recently seen in Toilet: Ek Prem Katha, Bhumi surely has a bright future and she will be soon be in the rat race for the top position. She is so natural that her emotions and act of being loved by someone are magical. However, with such kind of roles, she might get typecast and repetitive, but again if there is a good plot, there is always a scope for her to do something different.

Seema Pahwa is the strongest pillar of the film who has some catchy dialogues. Her screen presence and comic timing are utterly impeccable. She is definitely the new face of a perfect mother in our Bollywood films. Rest are as good too.

Shubh Mangal Saavdhan is a sureshot watch this weekend and not to be missed at any cost. It is a perfect stress buster for the common man!