The armour is not given to them to wear; the morphing comes from within, based out of mutual love and respect for the teammates. 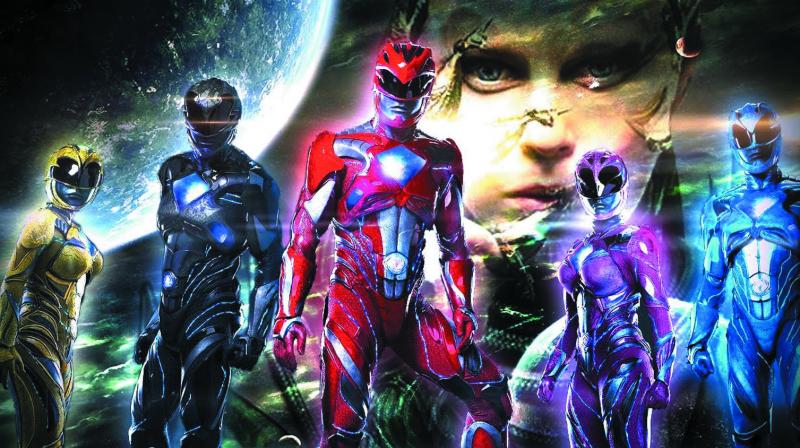 A still from the movie Mighty Morphin Power Rangers
Rating:

A reboot of Mighty Morphin Power Rangers from the early ’90s, Dean Israelite’s film is a tedious origin story about the teenaged superheroes. The film’s prologue shows a defeated ranger, Zordon, played by Bryan Cranston, burying the coins for future rangers to find. Millions of years later, in the present, the film dwells on the five ne’er-do-wells — all of them a result of the same cookie cutter used in every kitchen of Hollywood high schools. Jason Scott (Montgomery), a football player, gets lifelong detention for a prank that goes horribly wrong. He meets Billy (RJ Cyler), a geek who helps him disable his ankle bracelet. Kimberley (Naomi Scott) is a mean girl who is haunted by her past actions and is trying to reform. Zack (Lin), an adventurous spirit outside, but a caretaker at home for his sick mother, and Triny, a rebellious runaway, always the new girl, and grappling with her sexuality, complete the pack. The five stumble upon the hidden coins thanks to Billy, and are bestowed with superhuman might. They train with Zordon, whose spirit is now encoded in the matrix of the spaceship. Together they must fight the alien ranger, Rita Repulsa (Elizabeth Banks), who is bent on destroying the planet.

The performances are consistently hammy, with lines that are more cheesy than sentimental, even though the intention seems to follow in the footsteps of Logan and have our superheroes grapple with their existence in the larger scheme of things. Zack’s “Are we power rangers, or are we friends?” makes one wish that they’d only stick to their neon coloured CGI glow. Banks’ character brings to mind the most tackily dressed, screeching, scheming villainesses from Balaji TV shows.

The end of the film sheds all pretence of being an origin story, and instead becomes a showcase for special effects. Rita’s weapon is a giant monster made out of molten gold which looks like lava. The Power Rangers, on their part, find a Transformers-esque robot which they must manoeuvre together to send Rita hurling into outer space.

A large part of the film dwells on the five chosen ones need to bond with each other in order to be able to morph. The armour is not given to them to wear; the morphing comes from within, based out of mutual love and respect for the teammates. However, the fact that it takes the film 90 minutes to arrive at this point can make one seek morphine to numb the pain of all the shenanigans that the film is interspersed with.

There seems to be a new kind of franchise formula that Hollywood is interested in these days: target the millennials with nostalgia; revive whatever they grew up with. While Logan was a surprisingly intense experience, Beauty and the Beast was pointlessly tampered with. And I was never a fan of the silliness of Morphin Power Rangers. This addition does it no favours.