Actor-turned-Director Geetu Mohandas deep dives into her second outing Moothon, a story about a young boy’s search for his elder brother. 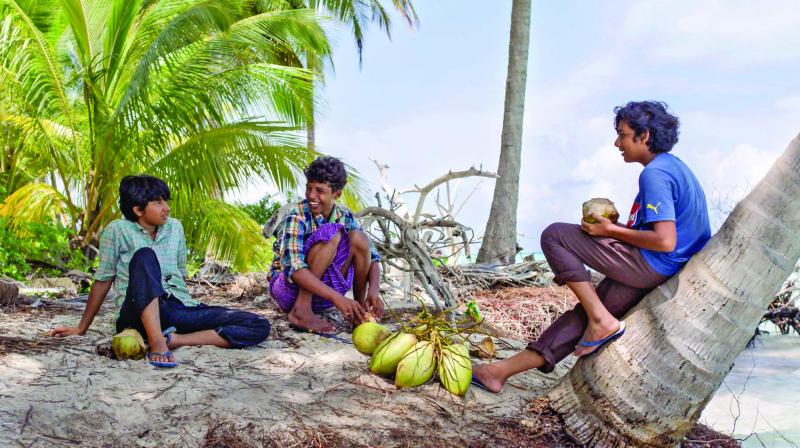 A still from Moothon

After her first feature film Liar’s Dice had earned immense accolades both internationally and nationally in 2014, director Geetu Mohandas’ second outing Moothon is on the path to creating the same wave. Returning from the prestigious Toronto International Film Festival (TIFF), where the film received a warm reception, Mohandas’ bilingual film (part Lakshadweep dialect of Malayalam and part Hindi) has now been declared JIO MAMI Film Festival with Star’s opening film for the year.

Moothon is a story of a young boy named Mulla, who, in search of his older brother, leaves his idyllic life in Lakshadweep to land in the rather infernal red-light district of Mumbai. Just like her debut featurette Kelkkunnundo and debut film Liar’s Dice, Moothon at its core is also a film that juxtaposes a character’s search with their inner quest. “I have invariably noticed the pattern in all my films: A sense of search, a sense of displacement, and a sense of identity crisis are the common themes that are quite repetitive in my films,” affirms Mohandas, who developed the script as a part of the Sundance Screenwriters Lab.

What’s interesting about Mohandas’ direction is her use of location, background and geographical landscape to reflect the character’s inner turmoil. Be it Kamala’s journey from serene mountains to chaotic Delhi in Liar’s Dice, or Mulla’s shift from peaceful Lakshadweep to murky Mumbai, the settings reflect the characters and vice versa. “There is a certain sense of metaphor because when you displace certain characters from their setting and bring them to a chaotic and an unfamiliar setting and unknown language, there is a certain sense of chaos and a certain sense of grappling with reality and survival. These are the themes that I love to explore in my narratives,” reveals Mohandas, before adding that she reflects the journey in the soundscape as well. “Apart from the visual narrative that changes course, what excited me about Kamathipura is that the soundscape also changes with more hustle and bustle of the city and the chaos. And I feel that it is not just a visual narrative, even in the sounds play a big r
ole,” she says about the film, which stars South superstar Nivin Pauly in a new avatar.

Mohandas is on a mission to cement her name as a filmmaker to watch out for, but many would not know that the director actually started her film journey as an actor in Malayali cinema. From a child actor in Onnu Muthal Poojaym Vare (1986) to Nammal Thammil (2009), Mohandas’ filmography is diverse, but the actress-turned-filmmaker says that she knew her calling was to be on the other side of the camera. “Everyone comes to the film industry to become an actor, but for me, it was the exact opposite,” she quips. It was when she met her husband and ace cinematographer Rajeev Ravi, and when her acting journey appeared to come in full circle with the international raving of Naalu Pennungal (2007), that she pursued her dreams of making movies. “For me, the transition was very easy because I was already learning the ropes and I wanted to be part of the cinema in a more creative way. I was always writing and engaged in storytelling. I think one must do what one is good at and can excel in.” she shares.

Moothon also marks a unique collaboration between Mohandas and Anurag Kashyap. Not only has Kashyap co-produced the movie, he has also written the Hindi dialogues for the film. “I have known Anurag for 18 years. And when I had a character coming to Bombay, I wanted a dialogue writer and he was the best to do it. I asked him to read my script and he liked it; he came on board and was instrumental in writing amazing dialogues. And it was so exciting to work with him because there is so much more to learn from him,” the director reveals.

With Kashyap as a team member and husband Ravi as a cinematographer, the 38-year-old accredits her team for not encountering any challenges while filming. “There were no challenges as such. Cinema is always a collaborative effort and never a one-man or a one-woman show. And when you have the best in the business on your team who have that similar sensibility, then you can go with the execution of it,” she says.

Although, she adds that as a filmmaker, one should always be aware of where they are shooting and maintaining the decorum of the place. Narrating her experience, the filmmaker concludes, “When we were shooting in Kamathipura, I thought that it would hostile for us to get in. But I was wrong because they were some of the most wonderful people I have met; they were so welcoming in their space. So there was this added responsibility for us that we should not disturb their space or their livelihood.”