In Family Man they are on much firmer ground. The material is strong and constantly interesting. 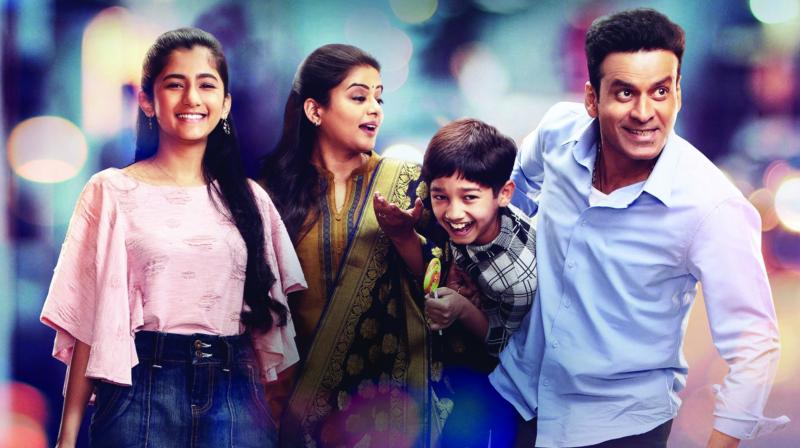 The idea of a dull white-collar office-goer moonlighting as an undercover agent is not new. Arnold Schwarzenegger did it in James Cameron’s True Lies 25 years ago. Now
it’s  Manoj Bajpai’s turn in a 10-part series that is as irresistible as streetside gol gappas. I couldn’t stop binging until it was all done.

The directorial duo Raj and D.K. have a reputation of doing the unexpected, whether is India’s first zombie film (Go Goa Gone) or a game-changing comic chudail film Stree which the duo wrote to  super-success. In Family Man they are on much firmer ground. The material is strong and constantly interesting. Issues such as mob lynching and anti-beef attacks or covert operations overreacting to  terror  threats, are raised organically  in the plot as Srikant (Bajpai) grapples with home and terror (and sometimes terror-at-home) issues to the best of his abilities.

And to be honest, Srikant’s best is plainly inept. He lies to his pretty and smart (much more than he, for sure) wife Suchitra (Priyamani) and yet somehow manages to get some respect from his two clever kids. “Dad works so hard in his office shouldn’t we be rich by now?” asks the little boy more for his ability to wriggle out of sticky situations than any parental virtuosity.

It’s refreshing to meet a screen hero  many sizes smaller than the larger-than-life heroes we’ve been watching all this year. Bajpai specialises  in playing a cornered everyman with a dark secret (even in Aligarh he played that). It’s even more refreshing for the hero’s  friend played by the very talented   Sharib Hashmi, to get some of the best lines.

Indeed the spoken lines are not just pithy and pungent they represent the colloquial cosmopolitanism and the cultural conundrum of Mumbai in striking yet subtle shades. There are some brilliant chase sequences on the  streets of Mumbai shot with a keen eye for the crowds that disperse magically when trouble hits the roads.

Some of the non-pivotal characters such as  the Kashmiri radical Qarim (played by  a Kashmiri new actor Abrar Qazi) or the Malayali terrorist Moosa (Neeraj Madhav) wounded in ways that cannot be reified, are so memorable they tend to overshadow the main characters.

What I found unconvincing was the protagonist Srikant’s wife Suchitra’s friendship with her colleague (Sharad Kelkar). She exchanges what-ya-doing-miss-ya  messages with her secret friend while her children sleep next to her, meets him on the sly, hides him from her husband. But when the husband follows her to a rendezvous he’s made to look like a worm. Because, hold your breath, she hasn’t slept with him.

Adultery is not just about the bed. It is also in the head. Luckily for us A Family Man has a wealth of well-written,  deftly shot episodes that manage to merge the themes of working class conflicts and terrorism seamlessly. If you like binge-watching this one is for you. Like many of the characters in it, The Family Man leaves us viewers with no choice.