Asean spirit is the cornerstone of this small, meaningful filmfest

There were filmmakers from the 10 Asean countries, who discussed everything from budgets to marketing to co-productions. 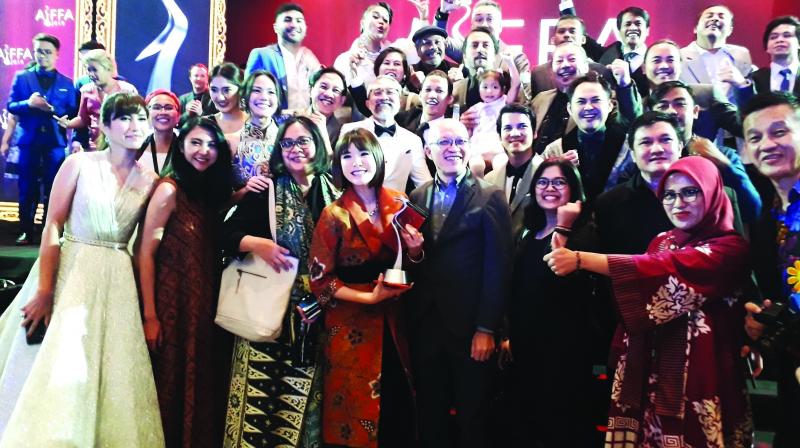 Winners at the awards night at the festival. (Photo: Lekha Shankar)

It’s not often that one hears of a film festival on “Asean cinema”, and that too in the little-known town of Kuching in Sarawak, Malaysia.

When I first heard of the “AIFFA” festival, I thought of our own mega AIFA Bollywood awards event! But this festival couldn’t be further removed than that.

In the three days that I was there, I realised that this festival was unique, for one reason — its intimacy, camaraderie and strong sense of ‘Asean’ bonding.

If only the 10 Asean countries were as united in other fields, they would be an indomitable force, indeed.

There were filmmakers from the 10 Asean countries, who discussed everything from budgets to marketing to co-productions.

Among these was the lady director Low Ngai Yuen of the brand-new Malaysian movie, The Outsider, which dealt with the little-known subject of street-vagrants. The activist filmmaker Y. runs a women’s NGO, and said it took her nearly three years to muster funds to make this moving and thought-provoking movie.

Brunei’s well-known woman director Siti Kamaluddin said the same, about her new movie, The Fourth Sunday, for which she had to do a huge amount of ‘knocking’, to get funds. The dynamic woman has just started a film-school in Brunei, and also launched a modest film festival there.

The Myanmar film Mi was made by a husband-wife team, with the husband Na Gyi being director and the wife, Paing Phyo Thu, playing the lead, only to save on costs.

The Indonesian film, Ave Maryam, centered on a Christian nun falling in love with a priest, and was made by a Muslim director. In fact, the actress who played the lead, was also Muslim. One was impressed to hear that the film did not face cuts, and had a smooth public release.

During a chat with festival director Livan Tajang, it was fascinating to hear of the birth and growth of this Asean Festival. It came about through an accidental meeting with the chairman of a top event-management company, who suggested the idea of an Asean Film Festival in Kuching, although the town was little known.

Livan had never attended a film festival, but was always interested in movies, and had done courses on the social impact of movies, during her master’s in Wales.

And that’s how they launched their first Asean Film Festival in 2013, with as few as 30 films.

This is the fourth edition of the festival, which is held once in two years, and they received as many as 129 films. The number was whittled down to 95 movies, and finally to 29, from which the awards were chosen, by an international jury.

The festival was proud to invite the husband-wife duo of the Filipino film, Dagsin, which, after winning an award at this festival, was selected to be screened at many international festivals. The duo explained the nuances of shooting, editing, marketing, and finally, festival-hopping, to a bunch of attentive listeners.

Among the speakers at the festival were the Singaporean company SAAVA (SE Asian Audio Visual Association), and the Malaysian National Film Association FINAS, both of whom offered grants to some of the filmmakers who pitched their stories (seven were chosen from 29 entries). Netflix also attended, and spoke about the digitalisation of the medium, which was the theme of this year’s festival. One heard that Indian producer Ekta Kapoor attended the last festival and partook in a panel discussion.

Festival director Livan was proud that there were at least five universities in Sarawak which now offered film courses. The festival attracted as many as 250 young volunteers. 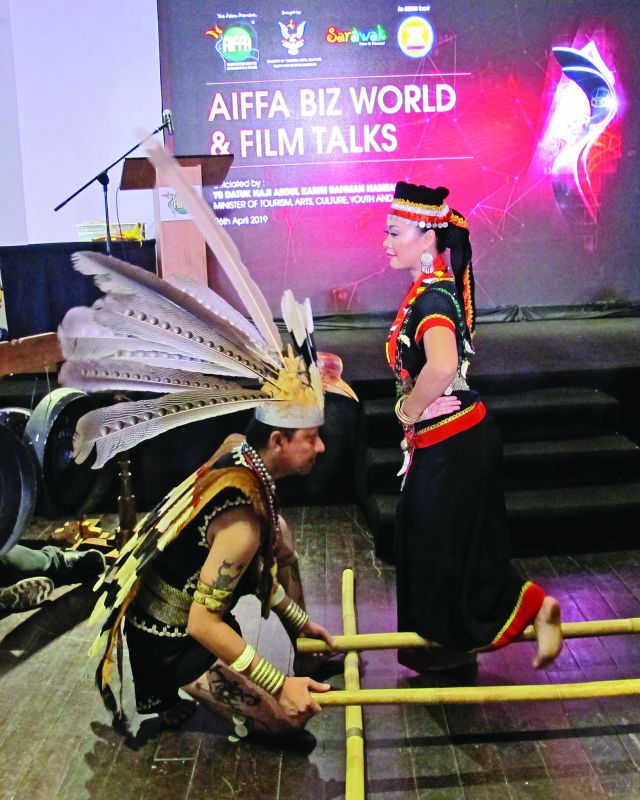 A dance troupe performs at AIFFA.

None other than Malaysian-born Hollywood actress Michelle Yeoh attended the inaugural Asean festival in 2013.

With her recommendation, the great Jackie Chan attended the second edition of the festival.

This year, Hollywood actor Steven Seagal was the chief guest, and he spoke about his great love for Asia, his deep interest to spend more time here, and shoot more films in the region. The actor was moved, when he was presented the Asean Luminary Award.

Being supported by the Sarawak government, the festival was keen to promote film shootings in the region. The friendly and enthusiastic tourism minister, Datuk ABD Karim Rahman Hamzah, offered many incentives to film units who wished to shoot there.

One of the special guests at the festival was Sri lLankan filmmaker Chandran Rutnin, who was one of the first to shoot two international films in Sarawak, nearly two decades back.

The main highlight of the Asean Film Festival was the Awards Night (this is one the few festivals that mentions the word, Awards, in its title).

The performers at the Awards Night came from various Asean countries. With Brunei, Malaysia and Indonesia speaking the same language, some of the singers were well-known in many Asean countries.

While the award-winners were delighted by the recognition they got for their work, the event was also an opportunity for them to share their
problems.

The unique Spirit of Asean Award was given to Rina 2, a Laos-Brunei co-production, which came about when the directors of the two countries met at this festival, two years back.

The Lifetime Achievement Award was given to Slamet Rahardjo, veteran actor, director screenwriter from Indonesia, who was ecstatic by the recognition from the Asean film festival.

“We are all birds, and this festival is our nest” he said with feeling.

This line probably summed up the raison d’etre of the AIFFA festival.

Livan described the Asean film fraternity as a “family”, and the festival as “a platform and permanent venue” for them.

The three aims of the festival, she stated, were “entertainment, education and enterprise”.

“Entertainment” dealt with promoting Asean films. “We have so many stories to tell, and we must make ourselves be heard.” She also encouraged more co-productions in the region.

“Enterprise” dealt with the business of making films, which was why they invited many production houses and funding agencies to the festival.

“Education” dealt with spreading the film culture among the youth, which the festival was doing successfully.

But finally, it was the strong film-spirit and camaraderie that was the USP of this unique
festival.

I missed seeing the rainforests of Sarawak, as the programme was too packed, although I saw a lot of their classical dances.

Where the festival needs to improve, is in the “technical” section, with more digital screening facilities and theatres. That would need to be their next aim, which would take them to the next stage of their impressive growth curve.

As far as Jaffri Amin, executive director of the festival, was concerned, “AIIFA is held in Kuching, but its heart will always be Asean!”

The writer is a commentator on lifestyle and culture based in Bangkok. This report was filed from Sarawak, Malaysia.