Says Dhanush, while talking about his ambitious sequel which sees him sharing the screen with Kajol. 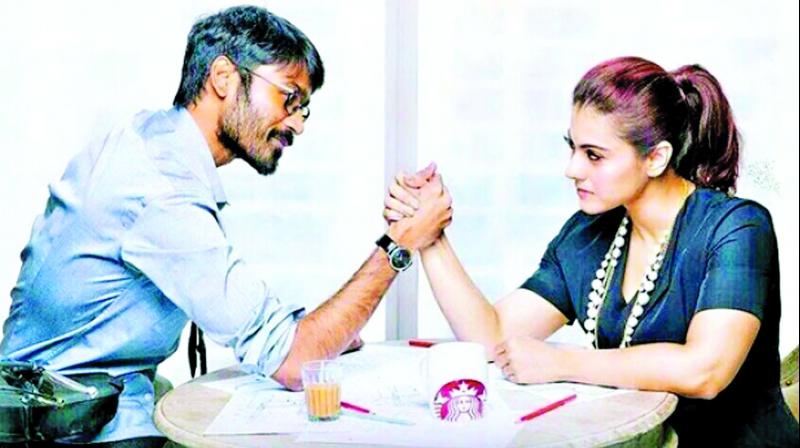 VIP 2, the sequel to Dhanush’s earlier hit film, Velai Illa Pattadhari, has been in the news ever since it was announced. With Soundarya Rajinikanth wielding the megaphone and B’town powerhouse performer Kajol making her comeback in a role with grey shades, the film has expectations skyrocketing. Dhanush, had come all the way from the sets of his Hollywood film for the music launch of VIP 2, and talks to us about the flick...

Starting casually about the reason for making VIP 2, he says, “Apart from VIP being a blockbuster movie, the various characters such as mine, the Luna bike I use in the movie, the lovable amma and appa, a pet dog named Harry Potter, the innocent brother, etc., had a huge reach among the audiences. They almost became brands, and it happened on its own. I never wanted to let go of the opportunity and so I hit upon VIP 2.”

Apparently, it was not an easy proposition to write a script for the sequel, says Dhanush. “I was toying with the idea after VIP turned out to be a hit in 2014. But, I felt it would be tough to pen a story for this, since sensibilities have to be maintained. Moreover, a lot of things came to an end in part one — like there’s no conflict in romance, the mother character dies and after being a loser, the protagonist Raghuvaran wins towards the end, etc. So, there I had to crack the romance in a new way, to bring in fresh and interesting episodes. It was a challenge, and I put it aside then.”

Revealing the USP behind this flick, the actor says, “We have imparted an important social message in VIP 2, in a commercial and entertaining manner. Above all, the highlight of part two is that Kajol is returning to Tamil cinema after 20 years!”

On opting for a Bollywood version also, he said, “After Dangal and Baahubali, which have made it big in the global market, the market is conducive for quality flicks. So, we didn’t want to restrict VIP 2 to Tamil and Telugu only — and hence, planned a Hindi version as well. When given a good product, people are very receptive.”

Quiz him as to who’s the better director — his wife Aishwarya or Sister-in-law Soundarya, he replies, “Rather than differentiate, you could ask how similar they are. They are both highly talented and ambitious in their own ways to earn a name. Their sincerity and dedication towards the profession is apparent. Both are strong filmmakers and think in different genres. They have a great command over their craft which they have inherited from sir (Rajinikanth).”

Now after working with two women directors and having produced a movie with a female director, Ashwini Iyer, the National award-winner says he would want to promote more women filmmakers in his future offerings. Having said that, he asserts, “We have not even used the word feminism anywhere in the movie and in fact, it celebrates womanhood.”

On Kajol, he quips, “Kajol works like a 14-year-old girl with amazing energy levels. I felt proud to share screen space with a legend like her. Even sharing a frame with Kajol was challenging.  Given a gap, she would out-smart you with her performance! She has a natural swag and style. I was very cautious in our combo scenes.” (smiles)

Clarifying rumours on him essaying Junior Rajinikanth in his production venture Kaala, Dhanush says, “To be honest, I am longing to work with sir. What more do you need?  Moreover, I can emulate sir to some extent (smiles). I also hear such rumours! Even though I bankroll the project, I have not heard anything from director Ranjith.”

Being a multitasker, we ask him what gives him the energy and motivation to excel in everything. “My source of energy is undoubtedly my two sons Yatra and Linga, and they are my all-time inspirations. I want to reach a level that would make them proud before they turn 17 or 18 years old. That’s my aspiration!” he says proudly, and takes leave.