Now people who are a part of the hip-hop circuit don’t just blindly follow trends, they research a lot. 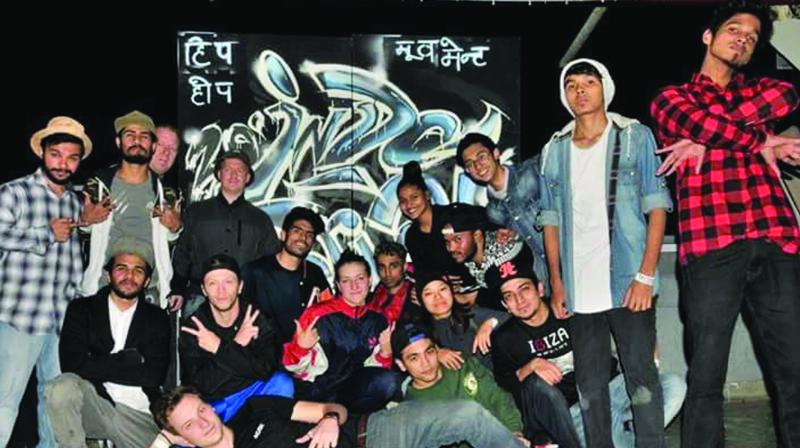 Artsites strike a pose after one of the hip-hop jam sessions in the city.

Be it classical or western or folk, the culture of imparting and learning dance forms is a prominent aspect of any metropolitan city’s socio-cultural fabric and Delhi is no different. In fact, with time, the city’s culture scene has only widened its ambit and is embracing various new artforms. A case in point is the massive growth of hip-hop culture. The city is witnessing a lot of dance battle events like Delhi Funk Circle and Switch The Funk Up. Even if there aren’t any big competitions, various jam sessions — also called the cyphers — are held around all round the year.

Started as an offshoot of the gang-related violence in the ghettos of New York in the late 1970s, hip-hop is known to have channelised the energy and anger of the youth towards a more creative cause. Cut to 2017, Delhi’s growing dance culture seems deeply inspired by this artform and its strong presence is drawing the attention of international dance organisations. One of the biggest hip-hop dance events titled Keep On Dancing, will take place on June 30 and July 1. Started in China, the show is coming to India for the first time. The event is being organised by Subhashish also known as Spark, one of Delhi’s well-known hip-hop dancers. The qualifying participants will form the Indian team that will represent the country at the Asia Qualifiers in August. The two best teams from the Asia Qualifiers will then be competing in the World Cup, which will be held in South Korea in August 2018 where 20 countries will lock horns. Both the experts and enthusiasts believe that the hip-hop culture is growing at a fast pace. “There are many talented youngsters in the city who are keen to learn more. In terms of the hip-hop culture, Delhi has reached an advanced stage. The local artists are going to the extent of learning the art and craft from those who were among the pioneers of the culture. They are attending workshops and seminars conducted by the veterans,” Spark explains. Recently, foreign artists like Megaman, Crazy Kyo, Phillip ‘Pacman’ Chbeeb, Kid Boogie and one of the most revered figures of hip-hop, Ken Swift paid a visit to the city.

Pulkit Takyar, another artiste, feels that the culture reached a higher level some five-six years back when the international artistes began coming here. “If earlier there used to be only three-four cyphers (happening) per year, now there are three-four per month. In the past, hip-hop was only a fashionable term where people used to call any funky movement as hip-hop without even understanding the meaning of the culture. To do something properly, it is necessary to know all the nuances of that thing, which fortunately people are now starting to learn. The techniques, beats and elements have greatly evolved. Now people who are a part of the hip-hop circuit don’t just blindly follow trends, they research a lot. They follow their passion for real instead of being under the misconception of following it,” says Pulkit.

Another artist Sumit Kumar, who goes by the street name Mr Footboog, seconds Pulkit and adds, “I think, what really gave the culture a nudge in the city were movements like Cypherholics that were aimed at making people aware. The efforts seem to have paid off because now cyphers keep happening on a regular basis.”

Artistes credit better remuneration for the growth as well. “With time, the payment has grown. Artistes now participate in frequent dance battles, take classes and are even getting invited to judge events around the country and the money is much better than before,” adds Pulkit.