A preachy tale about God on Earth and more

A wrong impression of the world is created up there and God is satisfied that all is well with the world. 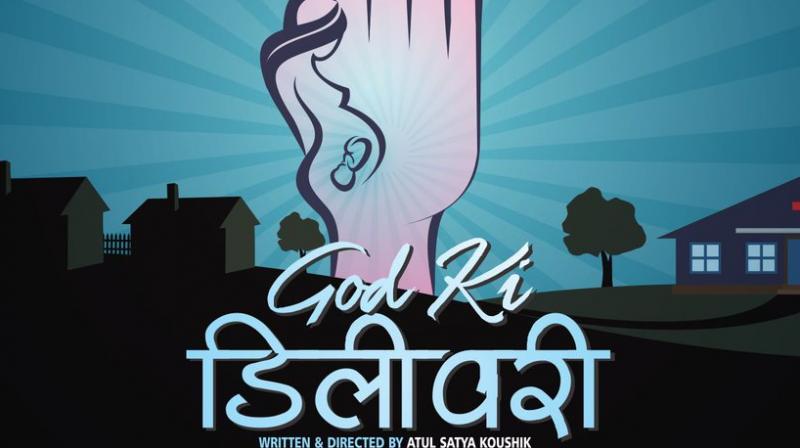 God Ki Delivery, a play written by Atul Satya Kaushik and presented by the Film And Theatre Society, is about the delivery of God in the form of Krishna on stage. It is the presence of God among people as an incarnation of the Supreme Being.

The play about the delivery of God onstage is about the necessity of God in a corrupt society. First we enter devlok, where the gods are discussing the state of affairs in the world and whether it would require the presence of God. It is decided that God should go and only his presence would help the world come out of darkness. On Earth, the situation is like this in the villages: There is a woman who is expecting a child, is not happy with the fact that a child will be born to her. She talks about the corruption and unkindness in the hospital where she probably goes. Besides this, there is another friendly couple living next door, who are also expecting a baby. They go together to the hospital where they lie down on the floor as a man comes up to them to ask that if they need a bed and they would have to pay for it if they did.

They give some money, he pockets it and disappeared. They can hear the sister screaming at someone inside, one of the patients probably, and are scared stiff. A supposed doctor comes in and he examines one of the patients and berates the nurse for leaving these two women on the floor.

Next, we see them lying on a bed comfortably with the man who took the money and the sister being very kind and generous with their time with them. God in the meantime is delivered and becomes a young man. He comes to the village to find out the truth about this woman. He finds that they are very comfortable and there is no evidence of any misdemeanour on part of the hospital.

This false picture is conveyed to those on devlok, God’s country. A wrong impression of the world is created up there and God is satisfied that all is well with the world. The play had a lot of sloganeering and it was almost as if it was commissioned by the present government. It’s a good idea for a play and to write about God’s interference in everyday affairs of the world, but it must be done subtly and needs a stronger storyline.

A group of theatre enthusiasts came to K.S. Rajendran to conduct theatre workshops for a month in the summer. The group organised a festival of eight plays at the Sri Ram Centre, and called it the Summer Theatre Festival from June 23 to June 30.

As a part of this festival, Mahesh Datani’s On a Muggy Night in Mumbai, directed by Rajendran, was presented.

It was quite good in the matter of characterisations. The characters, mostly homosexual, collect together in a friend’s apartment in Mumbai. They include those who are very comfortable witht their sexuality, those nursing broken hearts and their insecurities and also those that are yet to publically “come out” as gay.

The play shows how society creates patterns of behaviour and how easy it is for individuals to fall victim to the expectations that the society creates. The characters came up very well in the play, though the speech was not very good, in the sense they tried to dramatise the speech making it sound very odd, coming as it did from their mouths. The scenic design and lights were effective.