Shabnam believes that the last word only lies with the client. 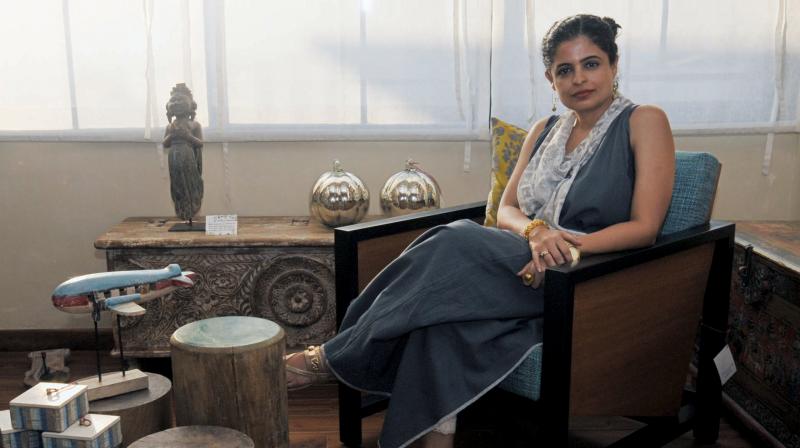 Despite being born in a filmi family, Shabnam Gupta’s formative years were spent far away from the limelight. Working in the marketing division for her father Prem Sagar’s film company meant picking up design pieces for his clients. Since then, she has gone on to design private homes of Bollywood personalities like Parineeti Chopra, Aditya Chopra, and Irrfan Khan. Shabnam has also lent her talent to create regular city haunts like Social, The Bar Stock Exchange, The Sassy Spoon into an intimate culinary experience. The granddaughter of the late director, Ramanand Sagar, she explains that that her induction into design was only natural. “I think we were the most non-filmy filmy family,” she laughs. “I grew up in an atmosphere where we were far removed from the glamour aspect. Adi has always been a friend from way back then, but I don’t think I belong to that world.”

After setting up her design practice, The Orange Lane, in 2003, the celebrity interior designer set up a three-storey retail store, The Peacock Life, a second outlet in the city, in Bandra this weekend. The collection includes a mix of curated and created pieces that range right from the quirky to the contemporary. Lanterns, wooden trunks, vintage wall hangings are a few products that make the collection. Shabnam says that the idea to kickstart a retail venture was more of a natural progression. She explains, “When you design for your clients, even if they give you a free hand, you are designing for a brief. Any creative person has a rebel in them, where they want to do something where there is no brief, or a boundary, so to say.”

Her famous clientele, which also includes the likes of Raveena Tandon, and Rani Mukerji, sure seem to be happy with her design sense. “Whether it is a celeb home or a hospitality project, the focus is on the person that I am designing the space for. Once I’ve done my work, it is the person who has to live in the space.” So, Shabnam consciously decided to go natural for Irrfan’s abode, while Parineeti’s home sports a pop of vibrant colours. She says, “For Irrfan, the whole brief was about getting the outdoors, indoor. He hates the boundaries that come with four walls. So we created a space where everything — directly or indirectly — weaves back to nature.”

With Adi and Rani, Shabnam had to make sure that their space is a reflection of both their personalities. “Here are two intelligent and creative people with different personalities — Adi is a much more private person. So we had to find a way to merge both their sensibilities.”

The idea of allowing the client a greater involvement in the design process is often a bone of contention that has given rise to memes and joke formats. However, Shabnam believes that the last word only lies with the client. She says, “There are times when my client doesn’t believe in something that I do. I understand that it isn’t my space, and even if I feel otherwise, I need to rethink my process and be as mentally tickled about it. It is always about what the client wants.”

The interior designer, however, is quick to add that she doesn’t have a design philosophy define her work. “Design is about growing and learning from the biggest master, which is nature. If you just look around and observe, you will realise that beauty lies in the smallest things,” she smiles.