Jatin Varma, founder of Comic Con India, says it was his ultimate dream to introduce an event like this in India. 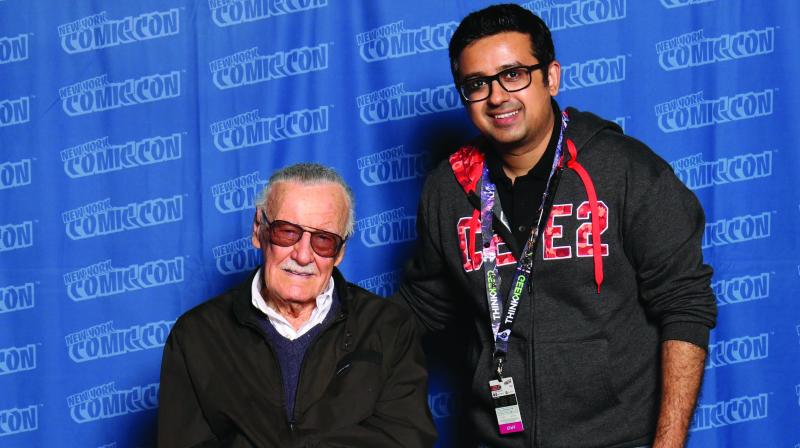 Young, vibrant and exuberant entrepreneur Jatin Varma has that perfect combination of humour and intellect, which explains why the entity he created has managed to take giant strides in recent years. Jatin is the founder of Comic Con India, which has taken a life of its own and spread across multiple events across the country. Comic Con India is a unique event celebrating the illustrated medium, which brings together the whole comics industry and related fields such as merchandise, toys, games, films and animation, along with fans of this culture across all age groups.

The 32-year-old Economics graduate lived and worked in the U.S. and studied at the University of Washington. Brimming with confidence, Jatin left the U.S. when he foresaw opportunities in India.  He wanted to run his own independent business in his own atypical, fun way and at the same time make it profitable, which has now come true.

Elaborating on Comic Con India’s evolution, Jatin says, “I was actively publishing comics at the time and the idea of starting up a platform that brought together not just the entire comic book community, but the pop-culture eco-system was simply too enticing. I had a successful content production venture at the time and decided to invest my profits into this new venture. Moreover, being an avid comic book fan, it was my ultimate dream to introduce something like this in India.”

There have been globalisation and localisation of pop culture via Comic Con events. The events, he states, are a multi-genre entertainment and comic convention attracting tens of thousands of fans from both local and international comic fraternities. “From Chacha Chaudhary, Suppandi and Tantri the Mantri to Iron Man and Captain America, our events bring together the global and local comic worlds, along with Indian mythology, under one roof. We have everything from legendary Indian comic publishers such as Diamond Comics and Raj Comics to international stalwarts such as DC and Marvel.” Jatin staunchly states that ultimately the agenda remains to provide a unique entertainment value proposition and experience, addressing the tastes of the audience which ranges from young children to their grandparents.

It is a surprise to find that mythology still remains one of the most appreciated topics amongst the millennials. Jatin observes, “Mythology is way too big to ignore. It continues to be part of our literary culture, be it books, movies or comics. With each generation, there is a renewed interest in it as well as new iterations of stories”.

As younger generations in India are highly driven by popular culture across comics and television, unconventional careers like cosplaying and costume making, web comic writing, creative merchandise designing and selling are gaining prevalence, he feels.

“These professions have gone beyond just passion and become a way for individuals to market and monetise their talents. All they require is to be creative. Having a degree in fashion or social media marketing can further help them connect and collaborate with larger companies and studios to amplify their reach,” he explains, mentioning that events like Comic Con or comic fan conventions also provide a crucial platform for them to showcase their creativity and highlight their potential. Jatin feels that globalisation and technological integration have augmented the variety of career options to choose from.  “There is higher awareness among people to look beyond mainstream fields, such as engineering or medicine, and accept off-beat career options as full-time jobs,” he adds.

Moving on to his passions outside of work, Jatin has a keen interest in music, books and films. He says, “I am quite a passionate reader. For me, my comics and other books are the best way to unwind and relax.”Travelling is what he often does. “The US is my go-to destination because it’s where I spent my college life and came of age as a person.

New York, to be specific, will remain my all-time favourite place. The energy of the city is inimitable and the amazing experiences I have had in that city make me go back very often.”