Thalaivi runs into a storm

Why was Ajayan Bala’s name absent from new poster? 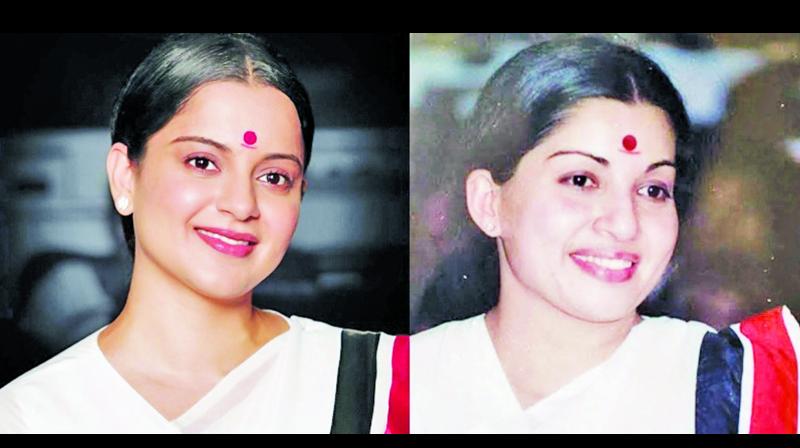 The fact of the film being based on the book Thalaivi reportedly also helped producer Vishnu Induri to win a case relating to the film.

Award-winning writer, filmmaker and screenplay writer Ajayan Bala has accused director AL Vijay of cheating him by side-lining him in Thalaivi, the biopic of late Chief Minister J. Jayalalithaa, although the film is based on his novel with the same name. The fact of the film being based on the book Thalaivi reportedly also helped producer Vishnu Induri to win a case relating to the film.

On Jayalalithaa’s 72nd birth anniversary, the makers had released a new look of Kangana Ranaut who plays ‘Amma’ in the film. Apparently, Bala’s name was not on the second look poster. Bala took to Facebook to reveal the ‘real reason’ for his ouster.

“Betrayal is very common in film industry”, he wrote. “But this one from Vijay whom I have known for 10 years and worked in his films is shocking. Having worked so hard for the research and screenplay for the film and having used my novel as proof in the court, removing my name from the credits is unethical. I pointed out some factual errors in the screenplay degrading late leaders, which the makers wanted to include in the film for commercial gains, and that’s the reason behind this humiliation. And what do you call this other than backstabbing? I am aware that they won’t even pay my balance dues because I posted this publicly.”

He also requested fellow writers not to work for anyone in cinema without entering into proper agreements.

However, in an unexpected turn of events, Bala removed his FB post a few hours later. Sources close to him said that taking quick damage control measures, the producers of Thalaivi had come to a compromise with Ajayan Bala, and hence he had deleted the post.

Meanwhile, netizens trolled the second look of Kangana Ranaut from Thalaivi as soon as her sister Rangoli Chandel posted it on her Twitter handle, comparing it with actress Nithya Menen who is on board The Iron Lady, yet another biopic announced a few months ago by director Priyadarshini.

Rangoli wrote, “Kangana in and as #Thalaivi ... without any prosthetics or any special effects Kangana looks like Jaya Amma, shocking, determination can make anything happen #Thalaivi.”

Posting a picture of Nithya Menen with Jayalalithaa, Papa Ki Pari wrote, “As usual #Thalaivi makers have zero creativity, copying @MenenNithya look, they had this look to more perfection, watch the real biopic #Theironlady not this sasti copy #thalaivi which doesn’t even cover her life as politician.”

Replying to Sanjay and Taran Adarsh, Sweety posted, “For sure. #TheIronLady is her true biopic as it’s showing her life as politician as well. ..Thalaivi just her early life, how she became an actress and all…that’s not interesting at all.”

When DC got in touch with Priyadarshini to find out more about the delay of her project, the young debutant filmmaker said, “A character in any film is directly related to its feel and emotional state. And in this case, the four major characters associated with her still live in the hearts of millions of Tamil people. When I am making the screen adaptation, it needs lot of understanding of the context, patience and time. It is a mammoth responsibility. I want to recall late ace writer Sujatha’s words here. ‘Making a biopic of larger than life personalities is like walking on a knife’. I’m taking time to pen the screenplay. I want to thank Nithya Menen for understanding the magnitude of the project and waiting patiently. I am also waiting for legal permissions from Mrs. Sasikala.”