This is not even close to Jaya

Kangana Ranaut’s first look for Thalaivi is out, and there’s no resemblance to Jayalalithaa whatsoever! 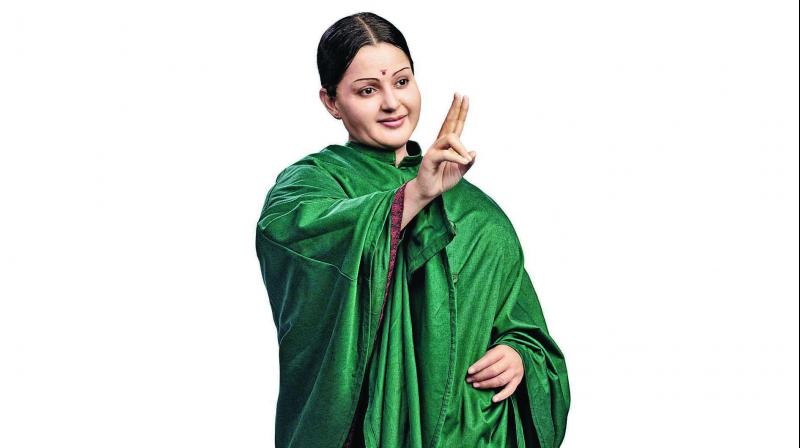 Even as Kangana is working very hard to get into Jayalalithaa’s shoes to play the role, the makeup and other logistics are monsters in their own rights.

Kangana Ranaut will enact the role of the former Tamil Nadu CM Jayalalithaa in the upcoming biopic Thalaivi. The film’s shooting, which is happening simultaneously in Hindi, Tamil and Telugu, has already started in Chennai, and on Saturday, the makers released Kangana’s first look as Jayalalithaa. And let’s be honest, the poster has no resemblance to either Kangana or Jayalalithaa! The only similarity is Jaya’s green cape, saree and her weight. Comments on twitter: “The face looks animated”; “If possible scrap this film completely and redo with new director, actress and team...” “I’m feeling sorry for Amma... it’s an insult to her”. And many more that slammed the look.

The makeup artist is from Hollywood!

Even as Kangana is working very hard to get into Jayalalithaa’s shoes to play the role, the makeup and other logistics are monsters in their own rights. Talking of how the shooting is pacing itself well, Vishnu Induri, the co-producer of the film with Shailesh R. Singh, gives an insight into Kangana’s routine at the shoot.

“It took nearly four hours to do her makeup, and we start shooting every day at 9 am. So you can imagine what time Kangana comes in to the shoot to start her makeup. She is a perfectionist and hard worker and the shooting is going on very well,”
he says.

Kangana’s makeup for the film is done by the renowned makeup artist Jason Collins, who has previously worked in Hollywood blockbusters such Blade Runner and Captain Marvel. For the look test, the team had made a trip to the US to meet Jason, after which he came down to India several times. “Jason came for the shooting for the first two days. Once he was satisfied with the look, his team took over working on the makeup. Finally, you all can see how Kangana transforms as Jayalalithaa,” adds Vishnu.

The film unit has been shooting continuously for the entire day, about eight to nine hours. “We are shooting for Hindi and Tamil separately and we are releasing in Telugu, the Tamil dubbed version,” explains Vishnu.

The producer also reveals that while they are erecting some sets to get a feel of the bygone era, for the outdoor shoots, they have chosen Mysore. “We chose Mysore because it looks more like old Chennai with lesser crowd,” he says adding that they would also shoot in Hyderabad and Bengaluru.