The play has 24 dynamic actors, 15 junior artistes, and 10 dancers along with mesmerising music. 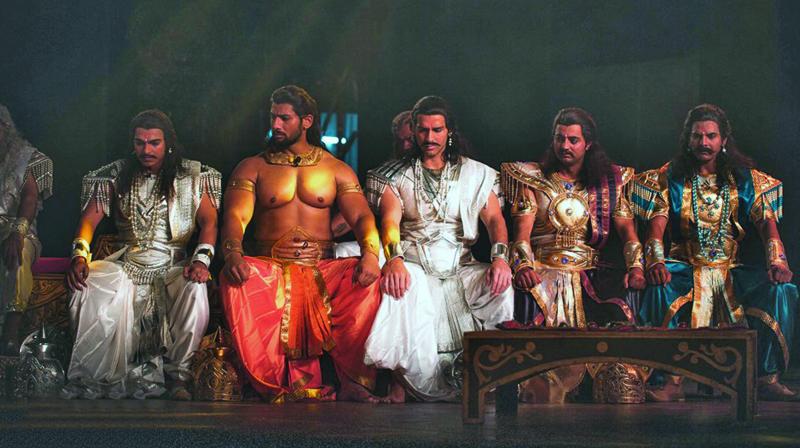 All history and mythology is based on cause and effect. ‘Mahabharata: The epic tale’ deals with the primary emotional and psychological causes that are the genesis of this destructive war.

There have been many dances, dramas, television shows and films made on the great Indian epic, the Mahabharat. We all have seen the BR Chopra’s Mahabharata and also the recent Ekta Kapoor one. But what I saw a few days back was above the two Mahabharatas. I am talking about the theatre production “Mahabharata: The epic tale” written and directed by the very talented film, television and theatre stalwart Puneet Issar and presented by Felicity Theatre. This magnum opus dance drama is choreographed by the legendary Padma Vibhushan, Padma Bhushan, Kathak Ustad Pandit Birju Maharaj and has renowned Bollywood and television stars playing various larger than life characters in the epic tale.

All history and mythology is based on cause and effect. “Mahabharata: The epic tale” deals with the primary emotional and psychological causes that are the genesis of this destructive war. This play deals with three main characters, Duryodhan, Karna and Draupadi, who were the pivotal causes of the conflict. For the first time in history, Felicity Theatre unravels the selfless and unconditional friendship and loyalty between Duryodhan and Karna. This dance drama presents the point of view of these two characters and highlights the causes that led to the annihilating war.

Bringing the epic alive on stage was not easy at all. The play has 24 dynamic actors, 15 junior artistes, and 10 dancers along with mesmerising music. While I watched the play with delight, it appeared to me as if I was watching a film on stage with actors coming out of the film and performing live in front of me. The show has some great use of technology, LED screens and 3D backdrops of the Kurukshetra war. The key moment when Krishna reveals his virat roop (universal form) is totally spellbinding and enthralling.

The planet has witnessed destruction based on the whims of a few people. In this dance drama, the narrative is done via Dharti Maa (Mother Earth) played beautifully by the renowned TV actress Meghna Malik, who explains no matter what the causes have been, the end effect has always been the same: destruction of the planet and mankind.

Like I mentioned before, this play deals with three main characters, Duryodhan, Karna and Draupadi, who were the pivotal causes of the conflict. Apart from friendship between Duryodhan and Karna, the dance drama also presents the arrogance of Draupadi, the shrewdness of Shakuni and the obstinacy of Duryodhan which may have caused the conflict. But under the debris of all evil was buried the forgotten story of true friendship, unconditional sacrifice and bond between two friends — Duryodhan and Karna.

“Mahabharata: The epic tale”, which runs for three hours spotlights that, “There is a little good in every bad and a little bad in every good”. The dilemma of the Pandavas, Kunti’s pain, Gandhari’s helplessness, and Lord Krishna’s guidance that has been created for eternity is all portrayed by an ensemble of stars, some of the best from the television and film fraternity with larger than life sets and production. The music requires a special mentioning which has been specially recorded to augment the overall experience of the viewers. The leading theatre production company, Felicity Theatre, headed by my dynamic and very enterprising friend Rahul Bhuchar presented this magnum opus in a poetic format, with rhythmic rendering of dialogues and tells us a story about good prevailing over evil.

A galaxy of iconic stars from the world of film, television and theatre that includes Puneet Issar (as Duryodhan), Rahul Bhuchar (as Karna), Meghna Malik (as Dharti), Urvashi Dholakia (as Draupadi), Gufi Paintal (as Shakuni), Surendra Pal (as Dronacharya), Aarti Nagpal (as Gandhari), Vijayta Bhardwaj (as Kunti), Danish Akhtar (as Bheem), Yashodhan Rana (as Lord Krishna), Karan Sharma (as Arjun) and Siddhant Issar (as young Duryodhan). This mythological extravaganza truly dazzles its audiences with its exquisite costumes, vibrant choreography and powerful performances.

Talking about the play, Puneet Issar said, “This rendition of the Mahabharata brings forth Duryodhan’s version of reality and truth as he saw it — the play throws light on the human aspects of his life such as his rock solid bond of friendship towards his friend Karan, his relationship with the elders of the Kuru clan and with Draupadi. This dance drama is an eye opener for many and it allows audiences to view this epic tale with a fresh new perspective”.

My very handsome friend Rahul Bhuchar, producer and MD, Felicity Theatre, added: “Recreating the Mahabharata with some of the finest talent from cinema and television has truly been a fascinating journey. It is a blockbuster production with magnificent sets and a storyline that will keep the audiences captivated and gripped all through the performance”.

Watching this Mahabharata is like watching a 70 mm performance on stage: It is on the level of a Broadway performance. Having competed 40 shows in a span of seven to eight months, Felicity is hoping to complete a golden jubilee of 50 shows by the end of the year and plans are on to take the production abroad next year too. The dates are already booked and on April 2020 America will experience this extravaganza. So, if you hear that this dance drama is in your city or around your city, then I suggest you better take out time to experience this brilliant show.

Sandip Soparrkar holds a doctorate in world mythology folklore, is a World Book Record holder, a well-known ballroom dancer and a Bollywood choreographer who has been honoured with three National Excellence awards, one National Achievement Award and Dada Saheb Phalke award by the Government of India. He can be contacted on sandipsoparrkar06@gmail.com