A play that talks about the simplicity and joys of life with just one message — Hello Zindagi’. 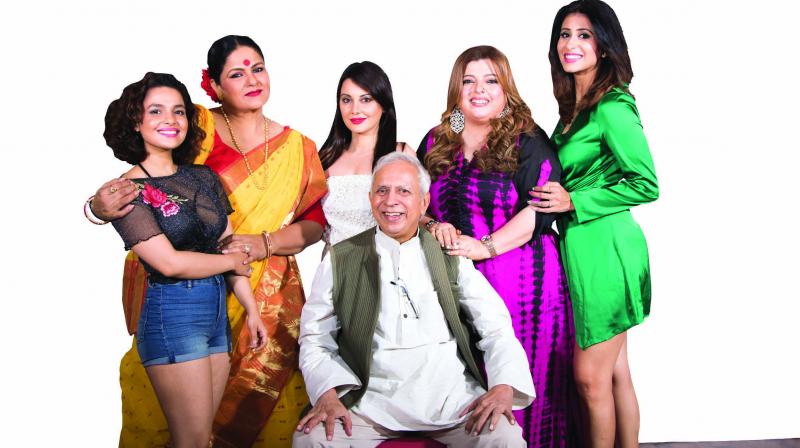 The Capital, recently saw a play titled ‘Hello Zindagi’ — a narrative that revolves around, five women with different backgrounds and characteristics, living together in an upmarket apartment in Mumbai.

Organised by Felicity Group the play goes like this: Pammi Singh (Minissha Lamba), a former film actress-turned-television star, who is divorced and lives with her former mother-in-law Bakula (Delnaaz Irani). Bakula and Pammi Singh are great buddies and live life to its hilt.

In this apartment stays Shivani (Chitrashi  Rawat), the sanest member of the madhouse. Shivani not only runs the house but also takes care of Bakula’s hotel business. Also Pammi’s school friend Sheena (Kishwar Merchant), who hails from Simla, lives in this apartment. Sheena apparantly has been been badly abused by her husband resulting in a total loss of her self-confidence. The household help Bijoya Di (Guddi Maruti) is the most respected woman of them all and also stays with them.

Life is everything one could imagine. As they say it is us humans who add to the complications of our lives and even as we are faced with life’s challenges, the only thing we could do is take life head on and say, “Namaste”. The play evokes this.

It is a take on life in modern India, breaking all moulds and stereotypes of mother and daughter-in-law relation where the former will take her son’s side during his divorce, or even the fact that daughters-in-law are outsiders, or even the classic age-old discord.

Raman Kumar, the director, says, “Through Hello Zindagi! we have tried to portray that God has made life beautiful, but then we who create problems for ourselves. This results in causing misery and problems. There are no short cuts in life; the simpler your life, the happier it is, it was a pleasure collaborating with Smita Bansal on her debut theatrical script.”

Raman further adds, “It (theatre) is a different medium altogether. There is one big difference between theatre television and films; in films, you do everything once. But in theatre, you have to rehearse and prepare the things and every time you have to go and perform live.” Directors in theatre productions, he feels, are like coaches of sports teams, as a coach cannot do anything on the field if any mishap happens. He or she cannot deal with the mishap on the stage.

When asked about his thoughts on whether there is a difference in the actor-director relationships in a film, television show and theatre production, he says that it is different with respect to the various mediums adding, “Theatre is a family. Theatre is ‘Hum Saath Saath Hai’ (We are all together). Whereas, in films, one is in front of the camera and the others are behind it. Here (in theatre), it is like performing together.”

He explains that in theatre, when an actor performs, a director feels that he/she is performing with the actor as well. The relationship between actors and directors is thicker, based on mutual understanding

Delnaz in plays the role of a modern mother-in-law who owns a chain of hotels ever since her husband died. She is an alcoholic, who along with her daughter-in-law, parties and reaches home very late and in some cases even gets chased out of bars and hotels. This character is very different from what she has previously portrayed. “For a very long time, even in plays, People have only seen me in one genre that is comedy. I would rate this play a notch above the others because I have taken a bit of a matured character in this play,” she says.

Delnaz says that irrespective of the medium, an actor would always be an actor as long as one is passionate about the art. “All  medium have positives and negatives and sometimes more of positives because being an actor, I'm very very pro my profession,” she says, adding, “For me, medium is not really important. I would give the same amount of dedication and hardwork that I would put in a film.”

She goes on to say that all the three mediums are important and different in their own way. She explains, “You actually live theatre because you are in front of a live audience.TV gives you your bread, butter and jam and movies are the future,” adding that as an actor one cannot be choosy about what medium they prefer over the other. She reveals that theatre has been her first love. She later details she was barely 16 when she first acted with a theatre group. “Theatre was my stepping stone to the industry. I respect it even more.”

She was firm while saying, “Either you are God-gifted or not. Acting cannot be taught to anybody. Either it’s there or it’s not there. You can just sharpen your skill. You can just make your skill brighter and better.”

On the issue of being segregated as a theatre actor, or an actor of any other medium, she says that she did not face any discrimination and adds, “Being a theatre actor has always given me an edge over the others.”

“I would grade this play as one of my very good pieces of work in theatre,” she says.